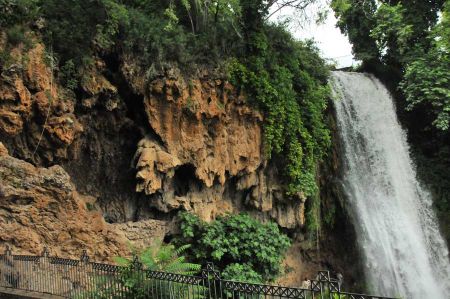 To negotiate detailed questions about our project development, we traveled to Thessaloniki to the Camperstop Zampetas for two days.

After these meetings we choose to return to Lake Ohrid with a brief visit to Edessa, which includes the waterfalls because they belong to the largest ones on the Balkans. These waterfalls are the reason why Edessa is called the city of water, even the town's name was derived from a Phrygian word in a sense of "a castle in the water" or "the city on the water".

Until the late 14th century the waters of the river gathered in a small lake in the west of the city. After an earthquake or a very strong storm, historically unknown, the water could find a way through the city up to the abyss, at which then the current waterfalls were formed. Many visitors during the 17th and 18th century described the city as a high plateau from which couple of waterfalls go down. A construction of the Greek electricity company in creating a hydropower plant on the River Agras in Edessa, to the west of the city, led to the result, that the waterfalls threatened to dry up in 1963. Citizens of Edessa protested too much. As a result the significant protests led to adjust the construction on 19th of August 1963.

Today the waterfalls of Edessa are a unique tourist attraction throughout Greece and Europe. From the largest of the two sites to be visited, which is affectionately called "Karanos" waterfalls, the masses of water rush under a roar about 70 meters into depth. Behind the waterfall stalactites and cave passages of the former course of the water are impressive to see. A parkland with couple of attractive facilities are surrounding the site of the waterfalls, so that it is worth to visit for a day.

However, you will meet with the footsteps of various cultures whose legacies and presence range from antiquity through Byzantine to the Christian Era. Edessa was the first capital of the Kingdom of Macedonia in the 6th century BC. The remains of the ancient city are located north-east of the present town. The capital of the Kingdom of Macedonia was postponed by Vergina in the course of history. The Macedonian defeat against the Roman Empire 168 BC. during the Battle of Pydna, when Edessa looses the last part of Macedonia's independence from Rome and 148 BC. Edessa finally is a city in the Roman province of Macedonia.

The Roman control existed until the division of the Roman Empire in 395 AD. Edessa, with this division of the empire, belonged to the Byzantine empire further on. The practiced control of Edessa - not without interruptions - lasts until the end of the 14th century. In the 9th century the Byzantine rule was interrupted by the first Bulgarian empire. After the fall of Constantinople in the Fourth Crusade Edessa became part of the Kingdom of Thessalonica in 1204. Not later than 1225 this rule of a Latin kingdom ends by the fall of Thessaloniki after the attack of the Byzantine successor state Despotate of Epirus. The Despotate could exercise control over Edessa until 1259; the defeat of the Despotate of Epirus against the Empire of Nicaea brings Edessa under Byzantine control again. In the late 14th century the Ottomans conquered Edessa and kept it until 1912, then occupied again. During the Ottoman period the name Vodena was familiar, however, the name of Edessa was still used.

After our tour, a decision was definitely fallen: The next time passing Greece, the ruins of ancient Edessa will surely be one of our first destinations.