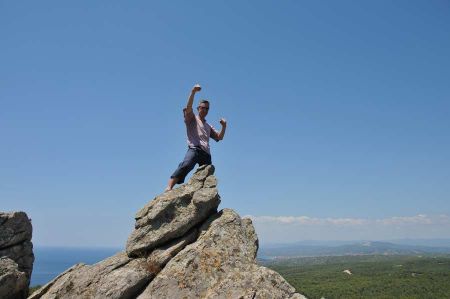 Our explorations in Halkidiki should initially lead us to so-called Paulus spring at the Chapel Ágios Pávlos, where there is a first trail to explore today, extending around the rock Petros, one of the highest points on Sithonia.

The way to the Chapel Ágios Pávlos with the spring of same name that the Apostle Paul is said to have opened by touching the ground with his walking stick, is, unfortunately, easy to miss. About five kilometers after the access road to the beach of Kastri the paved path up the hill to Ágios Pávlos goes, in a blind turn, to the left. A narrow, but asphalted road with some wooden sign boards at the turn showing a hiking map (see picture) can be seen (about 300 meters to kilometers plate 47).

The little streets winds up about two kilometers into rocky terrain with olive trees and almost ruined stone villages where goats find shelter. Soon the small, slightly off the path,  the tiny whitewashed chapel is in sight on the right side of the road. In addition, the spring, as a public space is close by, completely paved with stones, some benches are placed for relaxing. The clear spring water ripples through a small channel and serves not just hikers for refreshment. Often the locals use the water to replenish their drinking water stocks, because the spring water is of excellent quality. In tree next to the chapel hangs a bell and inside the idyllic stone building some icons can be seen under the gnarled old wooden beams.

The large plateau is as a garden full of rocks, interspersed with pine trees, many shrubs and typical Mediterranean vegetation. Like many other trails in this area, the forest roads are lined with beehives, which spread the sweet smell of flowers and honey in the times of the year. To continue the route, we choose the narrow path from the church Ágios Pávlos to the east (note the existing signs). After having used this way for approximately 400m, signposts can be found on countless trees that lead us to the southeast leading "Poseidon" path that ends in a clearing after about 300m. From here a narrow forest path, which leads directly to the rocky "Petros" begins. The route winds through the woods and clearings where sometimes goats and sheep graze.

Due to the high content of minerals, which are used in industry as natural insulators, the rock and the trail reflect sunlight and thus ensure an impressive shimmering which puts on the landscape. The hiking trail will guide you from the clearing continued to south-east, just north of the Rock "Petros", which stands out from many trees. From here we follow the grassy path to the south end of "Petros", where there are plenty of old olive trees. Then we turn right and head to two tall pine trees at the southern end of the Rock "Petros". Exactly between these two trees the path that leads us up to the rock begins, which allows an unforgettable view on Sithonia.

Returning to church "Agios Pavlos" later, we go through the olive trees on the north-western trail (look at the signpost "Agios Pavlos"). Once the road again enters the forest, it takes us to a small hill around and so provides a more panoramic view of the western coast and the island "Kelyfor". The route takes us further north-east through the pine forest, while to the right a large rock formations spreads in front of us. After a short time we reached at a fence, which enclosed an olive grove. From here we follow the fence which leads us around the olive grove and directly back to the church "Agios Pavlos".

This relatively simple beginner route can be started directly at the main street, interesting for those, who wants to travel the journey to Sithonia by bus, for example. The track itself is an  easy going forest paths, sometimes on rocks, which provide a beautiful view of the coast and beyond. Petros is the highest point of the surrounding track and provide an unforgettable view of  Sithonia for those who have no problem with the altitude, for climbing good shoes are necessary, but this is known by any hiker, we guess. From the church, you use the dust road for the way back to the main road. A wonderful hiking route, even in sunshine since huge trees giving shadow, you will enjoy the way.