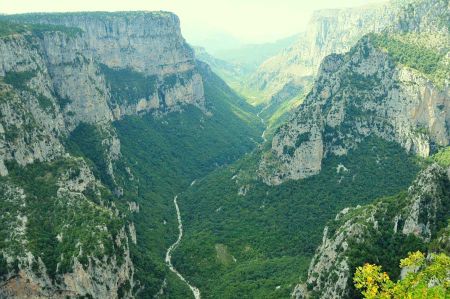 During our stay at Camping Vrachos in Kastraki at Meteora monasteries we also had the idea of a first exploration to the Pindos mountain range in Ioannina, especially to "explore" the  famous Vikos Gorge.

So we decided to start at the following morning already. A day for an initial exploration of the National Park.

From Kalambaka we first went on the spectacular views offering high mountain road E 92 along the river Rema Malakasiotiko to Panagia, the river is one of the sources of the Pinios, to the highway, then passing Ioannina to Elati to the entrance in the National Park Vikos-Aoos, which also includes the Vikos Canyon or Vikos Gorge. The Vikos Gorge is well known as a destination for hiking through the national park up to the viewpoints into the gorge. Another vantage point is Veli Rock at Vradeto. From here you can even see both canyons. The rocks on the Vikos Gorge spectacularly fall several hundred meters vertically from the view point.

Over a length of about 10 km the Vikos Gorge, bounded by the majestic Stouros and by the massif of Tymfi (especially its peak Astraka), stretches to the west, from the village of Monodendri to the village Vikos or Papingo southwest of Konitsa. The stream or river Vikos flows through the gorge and pooled at the northern end of the gorge with other source tributaries to the river Voidomatis.

The information about the maximum depth of the canyon vary in different sources between 600 m and almost 1,000 m. In Guinness book of World Records theVikos Gorge is registered as deepest canyon in the world, where the ratio between depth and width was defined as the decisive criterion.

Northeast of the village Monodendri, the side canyon Megas Lakkos meets with Vikos Gorge, coming from the Tymfi massif. Opposite of this meeting point, right between the two ravines, you will find the view point Oxia.

We had stopped at the office of the park rangers before, who had given us comprehensive information about the best view points at Vikos Gorge, also provided corresponding maps available on a recommendation from another park ranger, opting for the route via Kapesovo and Vradeto, from where we had to walk to the view point into the canyon. Above Vradeto you will find a small hotel with a restaurant, at the end of the paved route, leading along the signposted and well marked trail to the gorge. After about 20 minutes you will reach several really impressive viewpoints that are quite impressive.

For us it became quickly sure that there will come back to the Pindos National Park for further explorations, but in the context of getting to learn more about the many hiking trails, because despite increasing tourism, the Pindos is still a virtually untouched landscape, which is home to an unusual wealth of flora and fauna. Vultures and eagles that nest on the steep cliffs of the canyon are very frequently observed here. Also bears, wolves and wild cats have survived here to access the so-called civilization.