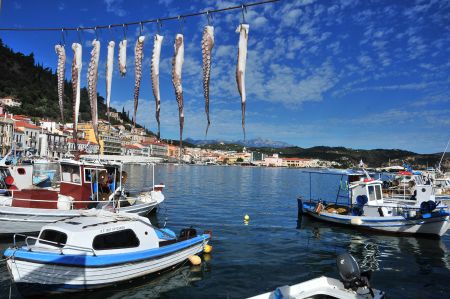 After crossing the Rio Andirrio bridge at Patras, we had reached Peloponnesus and wanted to go cross country using the road towards Gythio, a route of about 280 kilometers, which is not really easy to cope.

Scenically, this route first leads along the road 111 along the Erymanthos mountains, then with lot of serpentines across the Arcadia. We immediately decided to repeat this tour again, because we got into a rain front, which did not allow us the partial breath-taking views this time. Shortly before Tripoli we came across the E 65 as far as the junction to the E961, which expanded well, then brought us to Gythio quickly.

Gythio is a small town, which has a long harbor promenade, over steep stairs and picturesque alleyways, thus imparting an ancient Greek ambience. Just left over from its ancient past, the city now has only a small Roman theater; Many architectural emblems sank under the sea level in the 4th century AD by an earthquake. Witnesses of the splendor in the 19th century are numerous houses of neoclassical architecture on the hillside above the port, which in the meantime often devoted to decay, are now lovingly restored.

Gythio is situated in a small fertile delta of the river Xeras, framed by foothills of the Taygetos mountains, whose highest peak, called "Profitis Ilias", is located directly at the top of the town, often snow-capped until May. In the midst of the plain springs from a drinking water source and on the northern edge of the delta there are some small streams. The bay of Gythio offers a good protection for ships by nature. The port is now a ferry port for connections to the island of Kythira and to Kissamos on Crete.

Near the port is the small island of Marathonisi (the ancient Kranaë) with a pine tree forest and a lighthouse. It is connected with Gythio by a dam and borders the townscape picturesque against the open sea. Paris and Helena are said to have spent their first night of love here, on their way from Sparta to Troy.

The beaches of the Gavio village of Mavrovouni are known and popular for many camping tourists, but are only used in the summer season. Whether there are opportunities for wintering as a long-term guest is one of the occasions of our present visit. We will also report on this lateron.

Strawberry tree - flower and fruit at the same time