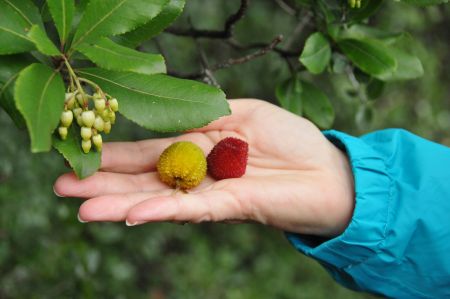 Our trip to the island of Shurdhah in the dam project of Vau i Dejes also brought us a new experience with a fruit and flowering plant which we had already noticed in Platamonas in Greece.

The first local research of these bushes with their strawberry-like fruits had led to a little confusion, but the later research via internet led to clarification, since the approximately 2 to 3 centimeter fruits of winter bloom grow so slowly that red and yellow fruits and the flowers are hanging at the tree at the same time.

The shrub is an evergreen shrub or tree with a growth height of 3 to 5 meters, rarely up to 10 meters. The bark is initially dark red, later grey brown and cracked in its surface. The branches are thickly leafed. The leaves are of elliptical shape, can be up to about 11 centimeters long and 4 centimeters wide and are about 1 cm long in their stalk. They are dark green at the top and finely sawn at the edge.

The flowering time of the strawberry tree falls in the months October to December, the flowers are white to light pink and bell-shaped. The fruits which develop from the flowers have a warty surface, are green at first, become orange to red with increasing maturity, and then look like strawberry fruit; this is the reason for the German name of the plant: strawberry tree. In the interior, the fruits are gel-borne and of fleshy to mealy consistency. The best: its earth-balanced fruits are not only a true feast for the eyes, they are still eatable. In the Mediterranean, the fruit is used to make Medronho, a high alcohol-distilled drink similar to fruit brandy, still jam is made from the fruits too. In Sardinia, a flowering honey is known as "Amaro di Corbezzolo".

The problem in the usage of the fruit for jam is that they are neither really sweet nor there is a pronounced taste, unlike strawberries. Nevertheless, it is possible to process the fruit to jam. Then, as usual, sugar or other fruits must be added, since the fruit itself has hardly any appreciable taste.

The Western Strawberry tree is a typical plant in Mediterranean vegetation. It occurs in evergreen forests of the region around the Mediterranean Sea, but also on the Atlantic coast as far as Ireland. It is also often found on roadsides. Because of its resistance to exhaust gases, it is also experimentally cultivated in cities. The Western Strawberry (Arbutus unedo) is biologically cultivated as foliage from the genus of strawberry trees in the Ericaceae family. Ancient name is sea cherry.

The Arbutus unedo is part of the legend "El oso y el madroño" (The bear and the strawberry tree) of the Spanish capital Madrid. In the center of the city (Puerta del Sol) the statue of a bear eating the fruit of the strawberry tree is to be seen. This image can also be seen on the city's coat of arms, but also taxis and other parts of the city use this myth. According to the legend, the fruit of the tree ferments in the stomach of the bear, which is thus drunk.

For the coastal salish of Vancouver Island Arbatus species were of great importance because they used parts of the tree, including the leaves, to relieve colds, stomach problems and tuberculosis. The Western Strawberry tree was first presented to the general public in Europe by Carl von Linné in Species Plantarum in 1753.

However, the very hard wood of the Western Strawberry tree is used locally, because it is an excellent fuel with a high calorific value. As we notice in general many species, varieties and their use have fallen into oblivion, this also applies to the Strawberry tree. Only a few residents know how to use the fruits of the strawberry tree. What a pity.

If at all, strawberry jam is made from fresh fruits on the basis of old, traditional family recipes passed down over several generations. The jams do not contain dyes, no preservatives, no flavor enhancers. Only ripe fruits and cane sugars are used; locally, berries or fruits are added. Once you meet with the fruit, just try them.

Enjoying sunset on the Meteora rocks at Kalambaka

Shurdahah Island - once the Illyrian settlement of Sarda