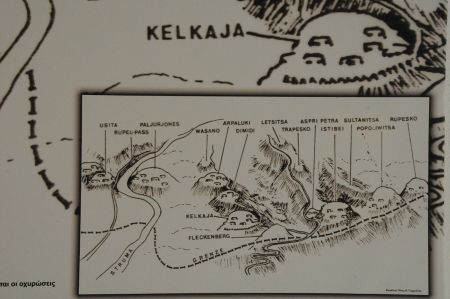 As it was evening in Agkistro in between, there were few suggestions for a day program to convince us to stay in the village for the night.

The offer of Anthimos to use the ancient hamam was offered as an option for the evening, but "laptop" was calling for the processing of the emails as well as first articles and blogs about the days experiences waited to be published.

For the next morning, Anthimos had initially planned to visit the Roupel Pass with the accompanying Roupel Museum; The Roupel Pass is considered a significant section of the so-called Metaxas line. This defensive line, which was planned for the defense of the country after the events of the first world war with the neighboring country of Bulgaria, was erected from 1936 onwards, with its preserved tunnel installations and the underground buildings, which today are very wide open as a museum, which is absolutely worth the visit for tourists. Probably also due to the proximity to Bulgaria, the section of the tunnel buildings released to visit is located in a military area, but this did not lead to any problems. On the contrary, we were able to ask any questions that were expertly answered by our accompanying person in fluent English. Only a passport had to be deposited to enter the site.

Anyone who has entered the tunnel system can also immediately understand why it is quite sensible to have a professional escort, as the tunnels are endlessly long. Starting from 1936, the surroundings of the Roupel Pass at the Strymonas Valley was expanded by the Greek dictator Metaxas within the framework of the so-called Metaxas line as part of the military bulwark against a suspected attack from Bulgarian territory. The protective barrier, or rather the tunnel systems, are named after Ioannis Metaxas, a Greek general and politician who ruled Greece as a dictator between 1936 and 1941. The Metaxas line was thus the most important defensive rampart of the Greek army along the Greek-Bulgarian border in East Macedonia and Thrace.

In the Second World War, however, the case of defense actually occurred on April 6, 1941, but the attackers were soldiers of the German Wehrmacht. The Strymonas Valley and its surroundings, in particular the Roupel Pass, were the site of the invasion of Greece by troops of the Marita event during the so-called Balkan campaign. At the same time, naval forces attacked the fortified positions of the Greek army and broke through them in a few days due to the massive use of bombers, despite a strong counterattack. During the occupation of Greece during the Second World War, the Struma marked the western border of the Bulgarian occupation zone.

In the course of the German attack on Greece, which began on April 6, 1941, the German 5th Mountain Division, under General Major Julius Ringel, succeeded in breaking the Metaxas line in some places, and other parts entrenched to encircle troops and force them to capitulate.
With the subsequent occupation of Greece, the Balkan campaign ended, and a few years later, Germany was defeated.

After entering the shelter rooms, we were warmly greeted by the present soldiers, even invited to a coffee, which was served to us in the canteen. Quickly our local guide was on site, so our sightseeing tour could start. Every now and then we asked about taking photos for our security, but there were no restrictions, either inside or outside the bunker systems. The entire complex to be visited offers a really impressive insight into the history of the war, which we would not have expected together with the exhibited artifacts.

And even though the reason for these buildings were a terrible ones, it is still amazing how people are able to work really hard within a short period of time, since the buildings were completed within four years. In order not to reveal the building project by noise with regard to the nearby border installations, neither explosions nor machines could be used in tunnel construction, so all the installations were done with pure human power. The workers were paid high wages but did not know where the construction sites were or what purpose they should serve. Just construction workers from the islands and Peloponnesus were employed.

A recommendation for the stay in Greece, if it is not only to go on a beach holiday. Once a year, there is a local show about the events of 1941. More information will follow soon.