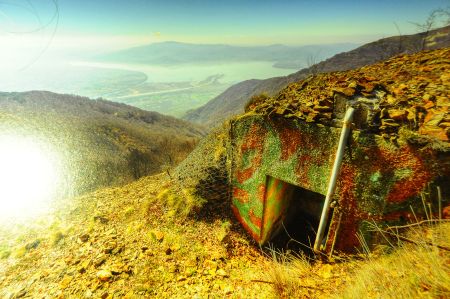 Fort Roupel is an old fortress on the northern border of Central Macedonia, close to the Bulgarian border, built before 1914 already.

In the 1930s, Fort Roupel became part of the fortifications of the Metaxas line and became famous for its defense during the German invasion of Greece in April 1941. Please also read the second article about the Metaxas line.

The Roupel fortresses are close to the national road Serres - Promachonas, which now leads to the Greek-Bulgarian border as a toll road. The fortress is located above the narrow Roupel Gorge that once was washed by the Strymonas River. The position of the fortress is of strategic importance for the entry into the Greek or Bulgarian territory, which is why the fortress was significantly strengthened in 1914.

During the First World War, in particular on May 25, 1916 and under the permanent pressure of the Germans, the Greek government ordered the fortress to be handed over to the Germans and their Bulgarian allies without a shot being fired. The German-Bulgarian troops then continued to occupy the other eastern regions of Macedonia without resistance. These actions led to the outbreak of a Greek insurrection in Thessalonica and the establishment of the provisional government of the National Defense under the Entente, which had established there, against the official Athenian government and King Constantine I, so-called "National Schism".

The fortress became famous during the Second World War, when the movements of the German and Bulgarian armies was stopped before this fortress. On the eve of the Second World War, Fort Roupel was added to the Metaxas Line, a new line of defense built to counter an invasion of Greece from Bulgaria. For three days, the fortress held up against the German attacks and was given to German army after heavy attacks of aircrafts. After an agreement, Greek soldiers left the fortress to Thessalonica.

Today, one of the galleries of the fortress is open to visitors, as well as a small museum and the pavilion, the observatory and the monument to the fallen soldiers. In the gallery, the visitor has the opportunity to almost feel the moments of the battle. Visit the stations in the side aisles, there are numerous dioramas, which not only show the Greek fighters. Photos show also German soldiers, their armament, parts of defense systems as well as the other attachments. Objective in the comments, documents that look the same are presented. But decide for yourself after visiting

In today's war museum, or on the associated open spaces of the Fort Roupel, a commemorative ceremony takes place on April 6 in the form of a free-air theater act.