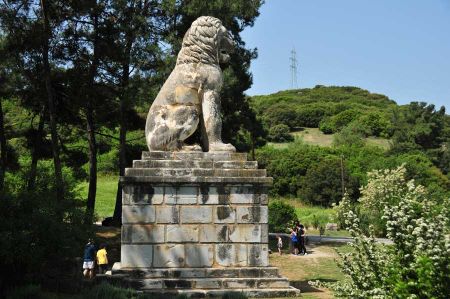 After a brief exploration of Argilos, a strong downpour had completely weakened the path, so it was extremely muddy, we went on towards Amphipolis, where we first had to cross the modern Via Egnatia - the highway towards Kavala and Alexandroupolis.

A little later, we had already reached another intermediate destination, the mighty lion monument of Amphipolis.

The Lion made from Marble - monument at Amphipolis 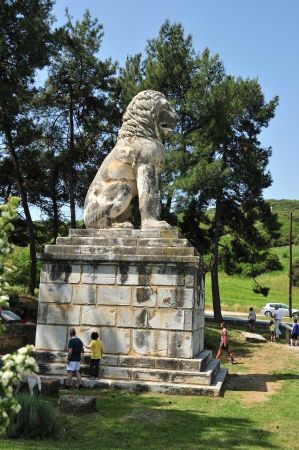 The marble lion probably dates from the fourth century BC and used to serve as a tomb monument in the nearby Amphipolis. How it got into the environment of today's site still remains a mystery. Greek soldiers, who encamped in the area during the second Balkan war, had found the first segments of this monument in 1912. A few years later, in 1916 during the First World War, English soldiers discovered further segments that were much larger than previously findings.

In the 1930s, when a part of Lake Kerkini was drying due to the dam project, there was the discovery of an old bridge, and very near the mud of the river, very large pieces of the lion could be taken. Possibly people had tried to remove the lion from its original location. In 1937 and thanks to the US Ambassador to Greece at the time, Lincoln MacVeagh, there was a private initiative with support and resources from the Greek government to restore the Lion of Amphipolis. The entire restoration process was closely observed by Oscar Broneer in his book "The Lion of Amphipolis" and documented in 1941.

Monument in honor of the Laomedon of Mytilene 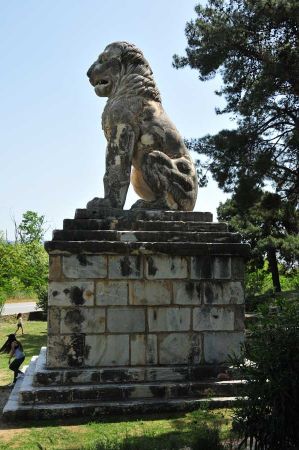 According to the archaeologist Dimitris Lazaridis, the monument was built in honor of the Laomedon of Mytilene, an important admiral of Alexander the Great, and it is believed to be on the top of the recently found Kasta grave. The figure of the lion's body has a height of 4 meters, the head already has a width of 2 meters, completely made of marble, which points to high educated craftsmanship. With its present base of another 4 meters, a total height of 8 meters is achieved. Imposing and powerful, where can have been its original location?

The lion also lacks the tongue and so some scientists are of the opinion that it should be implied that no one will reveal the identity of the dead in the grave. Surely a mixture of narrative and mythology, but who knows. Perhaps further explorations of the Kasta tomb will yield new insights.