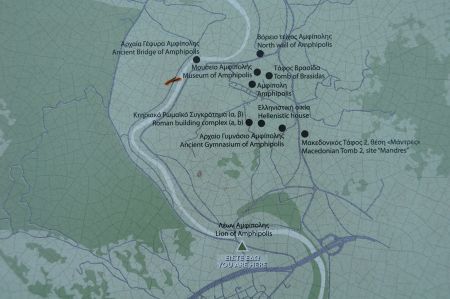 To the north-east of Amphipolis there is a 23-meter-high grave, which in all probability contains an important tomb from the last quarter of the fourth century BC, that is, from the epoch of Alexander the Great (356-323) and its immediate successors.

And it is quite certain that the ancient grave is the largest ever discovered in Greece.

At the necropolis in Amphipolis, excavations were intensified for the first time in 1956. Since 2012, the unusually large single-grave installation, which has a circumference of around 500 meters, has been excavated. In the summer of 2014 a complex entrance area was exposed, consisting of the following sections: an outer sealing wall, a passage guarded by two sphinx, a ground-filled antechamber, a second sealing wall and a gate with two caryatids.

The archaeologist's have so far entered two chambers, in which there was, however, no grave place; What is a remarkable circumstance already. In the third grave chamber the archaeologists suspect the buried, whoever it may be. Even the marble lion, which was also found, is a unique one.

A similar sculpture of the lion is known to archeologists only from a grave at Chaironeia, where Alexander's father, Philipp II, battled the Greek city-states in a battle, and secured his power over Hellas. There couple of enemies were buried under a stony lion, and, in spite of their defeat, were honored by the victors as heroes.

The speculation about the grave, but above all the great expectations of the public and politics, does not make it easier for the archaeologists to work on the ground. In doing so, they are confronted with a century's discovery. In 2011 the team around the excavation manager Katerina Peristeri had discovered a marble, three-meter-high and nearly 500-meter-long wall around the hill and released it, until then relatively unobserved by the public.

At the beginning of August 2014, the scientists came across the wall to the entrance to the enigmatic tomb. The archaeologists first discovered two oversized sphinxes, then two female figures, more than two meters high, which served as supports. In the middle of October, they laid out a colorful mosaic of more then 13 square meters, on which a bearded man crowned with laurel followed the god Hermes as a soul-leader in his chariot.

The picture shows the robbery of Persephone. Hes, drawn by two mules, is led by Hermes as the bridegroom. The head of one of the two sphinx and parts of the wings wese found with parts of the broken marble door in the burial chamber. The box-shaped tomb lined with stone slabs is immersed in the ground cobbled with blocks. According to the report of the Greek Ministry of Culture - in the otherwise dug grave - of the burial, the skeleton from which parts were found inside and outside of the stone crest, nails from a wooden sarcophagus and jewels of leg and glass are preserved.

"This is an exciting, a really exciting find," says Emmanuel Voutiras from the Aristotle University of Thessalonica. But the archeologist does not want to speculate: "I do not know a single Macedonian tomb, of which we know perfectly well who was buried in it." It would be a huge coincidence for his colleagues to count on unambiguous inscriptions or others at this tomb.

We will look forward to the further discoveries of the excavations.

Amphipolis - customs taxes on woods and mines made it rich

After exploring Argilos - The Lion of Amphipolis