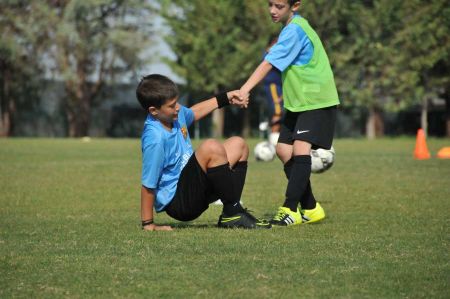 Once again our stay at the camper stop Zampetas in Thessalonica / Perea designed extremely entertaining, because Toni Zampetas asked us to photograph during a co-organized football camp as part of the FC Barcelona Escola Soccer Camps.

The football camp is run by a professional team of highly qualified coaches of the FCB Escola from Barcelona who organize the training and tracking and also are involved in all the other activities around the event. The workouts are adapted to the age of the players, to the game level and the football skills of the young participants, while the goalies get a special program.

The weeklong FC Barcelona Escola Soccer Camp is designed for girls and boys from 6 to 16 years who want to learn the methods of the most successful clubs in the world with the official FC Barcelona trainers directly involved to improve their skills and who want to have fun during the summer holidays at the same time (when you know to understand training as fun).

"Learn every secret from the training routine that is practiced by Messi, Neymar, Iniesta, Piqué, Bartra, Sergi Roberto, Jordi Alba and many others", is the motto of the event. We were very excited about our experiences on these ambitious goals.

The historical background of these summer football camps, which are in many places offered in Europe as a holiday program, goes back to the football history of Dutchman Johan Cruyff, who first as a player and then in his eight years as Barça coach won 29 young players into the first team. As the initiator of the "system quick and precise short passing game", the so called Tika-Taka, the training is designed for the game with the ball and less, as is customary in other clubs, to physical training.

Until the age of 16, players undergo any weight training and no endurance. Strength, endurance and speed are enhanced by the excessive training with the ball. The rapid games in minimal space, connected with the attainment of technical skills is a priority. Once the young footballers are mature enough for the professional department, they first come into the B-team. They are the so-called "beads" zoom out for a three-stage plan successively to the first team.

Until the arrival of Johan Cruyff's presence there had been only a few exceptions of young players into the first team. In his home country youth development played a major role since the 1960s. Leading the way, it was especially Ajax, which won several talents, including Cruyff himself, spawned and international titles with its youth program. Since Cruyff's time there is also the proviso in the club to practice the same game system in all age groups.

2007 FC Barcelona exported its system of youth education and operates its own "Masia" abroad since. With La Masia, the youth football academy of FC Barcelona is meant, emerged from the then numerous talents, including Lionel Messi, Andrés Iniesta and Xavi, the first three finishers in the election for FIFA World Player of the Year 2010

The first day we were surprised about the great professionalism of the event with FC Barcelona Escola Soccer Camps in Thessalonica already, well organized and concepts were well prepared, which already showed to noticeable improvements in the team behavior and cooperation in the course of the first day. To form team spirit was as much a program as well as the transmission of values of everyday life. We were looking forward to the rest of the week.

Thessalonica - Citadel and ramparts of Heptapyrgion