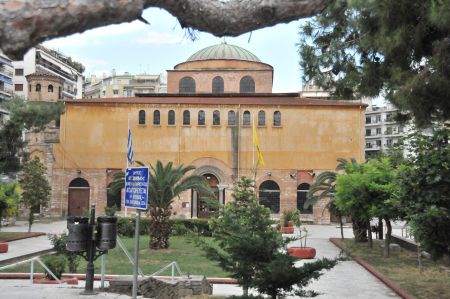 Our tours in Thessalonica had not only brought us into contact with the Roman cultural heritage, because the Byzantine era has left many traces too, as we will show in the following article and the attached picture gallery.

For the interested cultural lover worthwhile objectives, which can further be included in the stay in Thessalonica.

In the first centuries of the Byzantine period (550 to 750), Thessalonica was repeatedly, but without success, besieged by conquering Avars and Slavs, among others in the years 551, 586, 610, 615 and 617, especially during the Balkan campaigns of Maurikios. At the beginning of the ninth century, the Byzantine Archontite Thessalonica was founded. In the ninth century too, a long period of peace began, in which Thessalonica became the starting point of the Orthodox Christianization of the Slavs by Cyrillos (826/827 in Thessalonica) and Methodios to create a Slavic, Glagolitic alphabet from the Greek. Thessalonica was the second most important city in the Byzantine Empire, next to the capital of Constantinople, today's Istanbul.

In 904 Saracens captured and destroyed the city after only three days of siege. In 1185 it was conquered and devastated by Sicilian Normans. From 1204, Thessalonica was the capital of a short-lived Frankish kingdom under Boniface I, Margrave of Montferrat, which took a station here as part of the Fourth Crusade. The churches of Hagios Demetrios and the Hagia Sofia were temporarily Catholic churches. From 1224 to 1242 the despots of Epiros resided in Thessalonica. In 1227, Prince Theodoros I Angelos (a cousin of the emperor Alexios III) was crowned as a counter-emperor. In the meantime, the city was incorporated into the Bulgarian Empire of Czar Ivan Assen II. In 1246, the city was again incorporated into the Byzantine Empire.

For Thessalonica, the second city in the Byzantine Empire, a splendid epoch was built, which still bears witness to numerous churches, the Hagia Apostoloi, the Hagia Ekaterini, the Vlatades Monastery, or the large mule that protected the harbor until today a part is preserved. Venetians and Genoese built up their influence during this time, and Venice even got its own city quarter.