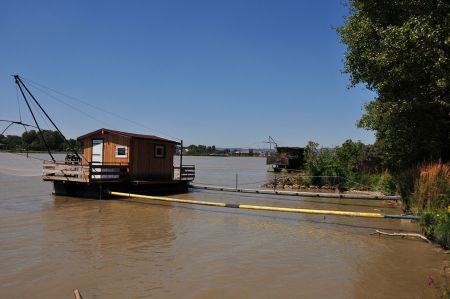 After some informative days at the New Danube campground in Vienna, we drove along the Danube Canal towards the Hungarian border, where we registered our vehicle in the electronic toll system.

The motorway largely follows the course of the Danube, the distance between the campsite New Danube and the chosen place Zuglegeti Niche Camping in Budapest is about 248 kilometers, which are to be completed in about 2.5 hours. Shortly before our departure, there was an interesting conversation with a couple who had just arrived in Vienna, following the Danube Bike Trail. During the following days their destination was then to go to Budapest by bicycle. The Danube bicycle road runs mostly on the Danube side but partly on one side so that the Danube has to be crossed several times during the journey. It follows an ancient Roman road along the Danube Limes, connecting the stations, fortifications and fortresses to the Danube delta. This Roman road was known as Danube Road and in latin Via Istrum.

The Danube is, following the Volga River, the second longest river in Europe with an average water flow of around 6,885 m³ / s and a total length of 2,857 km. In Čunovo, the most southern part of Bratislava, on the Hungarian border, the Danube divides. Only the northern arm forms the other Slovak-Hungarian border. The southern arm named Mosoni Duna (Moson-Danube or Small Danube) flows through Hungarian territory shortly after its separation from the main arm. The industrial, commercial and university town Győr is situated on its shores. This is where the Raab comes in. East of Győr the Mosoni Duna flows back into the main arm.

The most important city for Hungary, probably the most important in Hungary, is the former capital, Esztergom. Esztergom is one of the oldest cities in Hungary. The first known settlers were Celts of the Late Latène period (150 BC - 30/0 BC) on the towering castle mountain. After the occupation of the country, the Romans erected a fortress with a settlement around the mountain in the same place and called the place Solva mansio. After the immigration of the peasants Slavs settled in the ruins of the castle.

After the arrival of the Magyars in this area, at the beginning of the 10th century, Esztergom became the seat of the Grand Duke Géza towards the end of the 12th century, and then became one of the Hungarian royal rulers until the end of the 12th century. After the great revolt of the Slavs in 983, Emperor Otto III. (980-1002) 1001/1002, the Archbishopric of Gran granted the Christianization of the country, which until the 18th century largely consisted of today's Slovakia, and was considered to be the principal ecclesiastical province of the Kingdom of Hungary. The archbishop of Gran bore the title Primas of Hungary. Almost at the same time as the creation of the bishopric, Stephan I. 1000/1001 was crowned Hungarian king. The first royal palace was built on the castle hill, which included a Christian basilica. Under Stephan I. also the county of Gran.

The Seizing of Esztergom at Christmas 1241 by the Mongolian Empire led to the destruction of the capital of Budapest. Near the mouth of the Ipeľ (Ipoly), the Danube leaves the state border at Szob and is now Hungarian river on both banks. Shortly after, it is pushed off the Börzsöny Mountains to the south and runs between the Gerecse and the Pilis mountains. From the impressive Danube Valley near Visegrád, which winds around 90 degrees, the Danube is striving for a strictly southward way for about 500 kilometers.

After some 40 kilometers the Danube flows through Budapest, the capital of Hungary, which is the second-largest city on the Danube after Vienna with a little more than 1.7 million inhabitants. Here, the river reaches a width of 400 to 500 meters. Budapest is the last city downstream from the river Danube. At the same time, the Danube is leaving the Hungarian middle range and from this point marks the western border of the Great Hungarian Deep Plateau. After passing through numerous smaller towns such as Dunaújváros, Paks, Kalocsa and Baja, it leaves the Hungarian state shortly after Mohács.