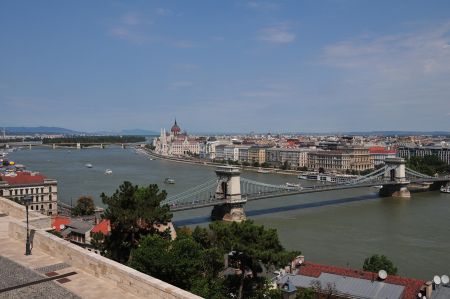 During the exploration of the Budavari Siklo cable railway at the castle mountain of Budapest we had noticed the mighty pillars of the bridge construction, which leads over the Danube. Similar to the Tower Bridge in London, the architecture of the pillar system suggested a construction period before the 20th century.

After the first research, the chain bridge was built between 1839 and 1849 at the instigation of the Hungarian reformer Count István Széchenyi, whose name it still bears today. It is the oldest and most famous of the nine Budapest bridges across the Danube.

One of the oldest archaeologically secured bridges is the prehistoric wooden bridge Rapperswil-Hurden, which was built around 1525 BC, connecting the Neolithic settlements of Rapperswil-Jona-Technikum and Freienbach-Hurden-Rosshorn, which was used for several centuries. The constructors mainly used wood as a main building material, but also stone was used to strengthen the wooden pillar. Other prehistoric bridges were known from England and Northern Germany. In the 6th century BC, the Babylonians under Nebuchadnezzar II built bridges made of cypress and cedar wood. The construction of arched bridges made of natural stone or concrete was introduced by the Romans for the first time, the Alcántara Bridge still demonstrates this today impressively.

There were various attempts along the Danube, the mighty border- and limes river, to build strong bridges crossing over the river, as in Belgrade, where natural shoals were used to cross the river. Again and again these structures were destroyed due to the strong ice in the winter. Since the 16th / 17th century, a pontoon bridge was built for the crossing of the Danube near Budapest. From the year 1776 it was built up of 46 floating bodies in the spring, linking the two independent cities Buda and Pest. However, it had to be dismantled before winter and could only be rebuilt in the spring, because otherwise the ice masses of the free-flowing Danube could have destroyed the pontoon bridge. For this reason, there was no permanent link between the two cities during the winter months, which severely restricted the free movement of people and goods and partly brought them to a standstill. A crossing of the Danube was only possible in the winter when the ice covering was closed, which not only limited the times, but also the transport weights.

In 1832, István Széchenyi then initiated the foundation of the Budapest Bridge Association, which had the task of bringing together all known bridge designs. In addition, the association should create a new draft, taking into account existing geological surveys of the area. The construction of a bridge between the two cities of Buda and Pest should also promote the exchange of goods in Hungary and modernize business routes. That is why the bridge in Széchenyi's transport concept also played a key role.

The design of the chain bridge was commissioned by renowned English engineer William Tierney Clark. The construction management was given to an engineer whose name was Adam Clark, who settled in Hungary after completion of the construction work. His name was dedicated to the square between the chain bridge and the tunnel through the castle mountain. Széchenyi, however, was not only the initiator, but also the organization of the building. In the early 1840s he was the president of the Budapest Transport Council, building materials from a wide variety of countries, as it was impossible to obtain the necessary 2000 tons of steel for the bridge in Budapest.

The neoclassical structure is supported by two triumphal arch support pillars, through which the iron chains of the 375 meter long bridge body run, hence the name chain bridge. The arched doors have a passage width of 6.50 meters and the weight of the iron construction is 2,000 tons.

Preparations for the first pillar began on July 28, 1840, when wood piles were driven into the shores as a fencing of the construction site. After these works, which took two years, on the 24th of August, 1842, a solemn foundation was laid in the excavation pit of the Pester abattoir. On November 20, 1849, after a long period of interruption, the construction and completion of the bridge took place.

Between the two pylons a span of 202 meters is bridged. For the next 30 years it was the widest bridge of this type of construction. Széchenyi was never allowed to pass his bridge, since after a collapse in September 1848 he spent the rest of his life in the recreation center of Döblingen in Vienna.

In 1915, the original structure was replaced by a stronger one because it was no longer capable to transport. The wooden parts were replaced by iron and steel. This second bridge consisted of more than 5,000 tons of steel, but the two bridge piers remained unchanged. Material was reused wherever possible. A lot could be produced in Hungary, but the new chain heads on the pylons came from London.

A legend about Count István Széchenyi tells that it would have taken a week before he could cross the Danube to the funeral of his father. So he decided to plan the bridge.

Monument against facism - shoes on the bank of Danube

Walk across the Margareten Island of Budapest