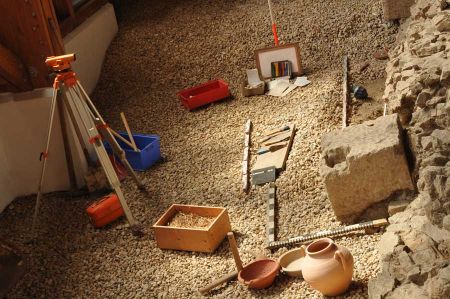 In the area around Győr, once being the Roman military camp Arrabona, and along the Danube, traces of settlement of various cultures were detected earlier on.

A first major Celtic settlement on Káptalan Hill was built in the 5th century BC. The activities of Roman traders are to be noticed in Arrabona first time during the 1st century BC. At 10 BC the Romans also occupied the northern part of present-day western Hungary and added it into their expanding sphere of influence. After suppression of the great Pannon-Dalmatian rebellion in 9 AD, the province of Illyricum was divided. Its northern part fell to the newly established province of Pannonia.

In antiquity, the first Roman settlement of Arrabona were located in the area of ​​Győr. The fort was one of the earliest Roman fortifications on the Pannonian Limes, auxiliaries of the army cavalry (Auxiliar) and, next to Klosterneuburg castle, the second auxiliary camp in Upper Pannonia with a crew of 1000 men. It was probably occupied with Roman troops from the 1st to the 4th century AD. In late antiquity, marines of the legions stationed in Vindobona and Carnuntum were partwise send to the fort. Findings of the fort and its surroundings bear witness to post-military use by the civilian population from the 5th century AD. Findings of the burial grounds provided a good impression of the decline of Roman culture and the increasing emergence of barbarian elements in a Limes fort at the time of migration of peoples.

Arrabona is located in western Pannonia, the smaller Hungarian Plain. There, the Raab river and the Rabnitz river open into the Mosoni Duna, a right branch of the main Danube river. To the east of today's town of Győr, the plain continued as a narrow strip, while at Almásneszmély the ridges reach the banks of the Danube. Due to these topographical conditions, just a less fortified defensive line was needed to secure the Roman imperial border. Castles mostly were erected just at the mouth of streams and at the point where the southern branch of the arm again united with the mainstream of the Danube. The camp itself was located on a flood-safe elevation at the mouth of the Raab into the Moson Danube, now known as Káptalan Hill. A new fortification, the Püspökvár (Bishop's Castle), was erected on it during the Middle Ages above the ruins of the castle. The town administratively counted first to the province of Pannonia Superior and from the imperial reform of Diocletian to the newly founded Pannonia Prima.

The crew secured a busy river crossing on the Limes road (via iuxta Danuvium), at the section between Carnuntum and the legionary Brigetio and the terminus of an important diagonal road connecting the Danube with the towns of Savaria (Szombathely), Mursella, Sopianae (Pécs) and Tricciana far into the interior of the province. There existed a ferry service between the town of Vének and the south bank of the Danube until the Middle Ages.

Archaeologists and researchers on the Káptalan hill 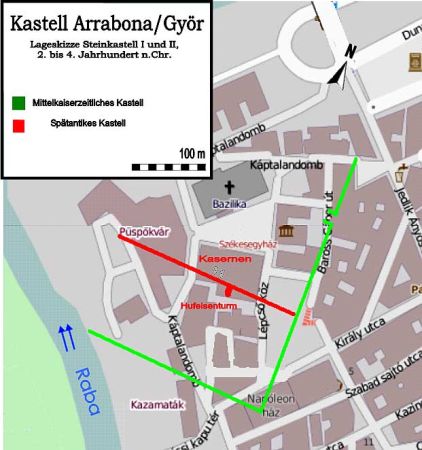 The site of the Roman camp on Káptalan Hill has been known since the early 20th century. In 1954, László Barkóczi discovered, on probing in the courtyard of the museum, a Roman road, probably one of the arterial roads of the fort. First more detailed information about the fort were obtained by excavations in 1956 (including clarification of stratigraphy). Between 1968 and 1970, a small part of the Vicus area at Széchenyi Square was systematically explored by Dénes Gabler, Eszter Szönyi and Peter Tomka to a depth of three to five and a half meters. Based on these results, a chronology of the settlement sequence could be compiled. From 1998 to 1999 Ezter Szöny and Peter Tomka were able to examine another 200 square meters of the area. From 2008 to 2009, the redesign of the square and the redevelopment of the so-called Lloyd building on its east side enabled some emergency excavations, but due to the building specifications, it was not possible to penetrate very deeply into the archaeological stratigraphy. Roman finds were made in these excavations, especially in the basement of the Lloyd building. On the west side of the square some antique findings came to light. The number of scientifically documented burials in the cemetery of the 5th century could be increased up to 70 artifacts.

A small part of the late antique south wall of the fort was conserved in the Bishop's Park and made accessible to the public as part of an archaeological viewing area. 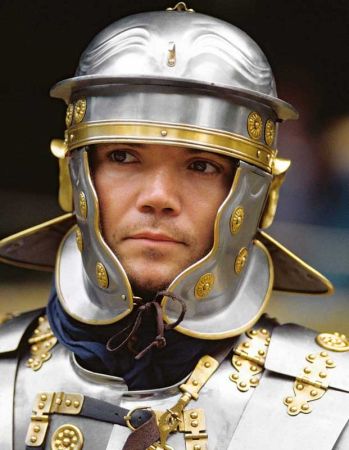 Geographer Pomponius MelaJudging from the ceramic findings, the Romans built the first army bases in different sizes along the entire southern bank of the Danube from the first quarter of the first century onwards. The early wood-earth fort of Arrabona is one of these military facilities and was probably built around the middle of the 1st century AD as part of a new concept for nationwide surveillance of the new imperial border. For this purpose, Emperor Vespasian dissolved the last military camps in the interior of Pannonia and moved their crews to the new castles on the Danube.

At the same time, the conditions for the formation of the Upper Pannonian Limes had been created. During this period, according to an inscription, the fort became the residence of a praefectus ripae Danuuii et civitatum duarum Boiorum et Azaliorum. In the early 2nd century, the wood-earth fort was demolished by the ala I contarorium milliaria and rebuilt in stone construction. It was next to the castle in Klosterneuburg the second auxiliary camp of Pannonia superior, in which a crew of more than 1000 men was placed; such units were an important combat and power potential for their respective commanders. Between 166 and 167 AD, Marcomanni and Quaden crossed the Danube again and pillaged the Pannonian territories. The attack could be fought off, inter alia, with the help of the Aruba group of cavalries, but these actions were just a first taste of coming, much more devastating incursions of the trans-Danubian barbarian peoples.

In the reign of Constantine I, the camp was scaled down, but much more fortified. Rome was able to maintain its rule over the region until the late 4th century. The regular Roman military finally withdrew from Arrabona, presumably in the years around 380, whereupon the fort turned into a civil oppidum, in which the inhabitants of the fort and vicinities found shelter from the turmoil of the migration of peoples. The last Roman coin finds in the castle date from the time of Valentinian I and his brother and regent of the East, Valens. With the contractual handover of Pannonia to the Huns between 406 and 433 AD, the Roman administrative structures dissolved in Upper Pannonia. Despite constant threat of new immigrant tribes from the east, the castle remained inhabited throughout these years.

Around 500, Slavs and Lombards immigrated to the region. From 547 or 568, the Avars ruled the area around Arrabona until around 800. Later it came under Franconian and especially Slavic influence. Between 880 and 894 the place was part of the Great Moravian Empire and then briefly fell under East Frankish dominance for a short time. Around 900, the Magyars occupied Arrabona and incorporated the walls of the Constantine fort into the town fortifications. Stephen I, the founder of the Kingdom of Hungary, elevated the aspiring city to a bishopric. Since then it has been known under her Hungarian name Győr.