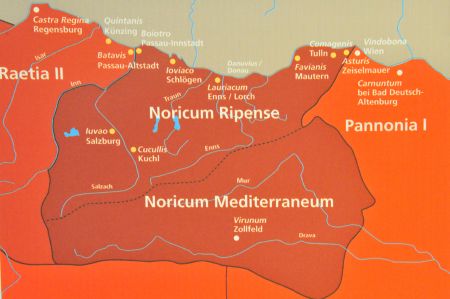 From the Celtic kingdom, under the leadership of the Noric tribe, a Roman province of the same name had emerged, which was assigned to the Roman Empire with its capital Virunum (now Zollfeld near Maria Saal).

However, the limits of the province were constantly changing until the provincial status was surveyed. While the settlements Emona (Laibach), Poetovia (Ptuj, Pettau), Colonia Claudia Savaria (Steinamanger) and Scarbantia (Ödenburg) along the road from Aquileia to Carnuntum (the old Bernsteinstraße) were probably always Noric. With the establishment of the province of Pannonia this is affiliated. Carnuntum itself still belonged to Noricum in 6 AD, but was also joined to the province of Pannonia together with the Vienna basin.

Noricum was overrun by the Romans in the following centuries with a dense long-distance road network. Numerous milestones and other archaeological findings bear witness to this. The best-researched Roman street station Noricums is Immurium (Moosham, province of Salzburg), at the southern foot of the Radstädter Tauern Pass. Another important link was set up from Rome via Aquileia, Emona, Celeia, Poetovio to Carnuntum. Numerous side roads branched off into the Austrian Alps. At Aquileia one road went to Aguntum, another was going via Virunum to Ovilava (Wels). Also the Loiblpass was already existing by a mule path passing Emona. From Celeia one reached the Hüttenberg Erzgebirge as well as via Virunum to Iuvavum. The Murtal with Flavia Solva (near Leibnitz) was developed by Poetovio. The second most important connection led along the Danube Limes from the Pannonian Vindobona (Vienna) via Cetium (St. Pölten), Lauriacum (Lorch-Enns) to Boiodurum (Passau). At Lauriacum they branched off to Ovilava, which led to Luvavum (Salzburg).

The Amber Road is one of the old trade route between the Baltic Sea and the Adriatic Sea. Starting point is Aquileia or Venice, the end point is St. Petersburg. Already in prehistory, trade with amber started. In the area of ​​its findings at the Baltic Sea, Bernstein was already artistically worked on in the Neolithic Age, especially the treasure of Juodkrante, now shown in the Palanga Museum in Lithuania. From the copper age, around 5000 years ago, the oldest amber findings in Austria are 3 pearls found at Schletz in the Weinviertel, today in the Museum of Prehistory in Asparn on the Zaya. In the Bronze Age baltic amber appears in Upper Italy. On several routes Bernstein was traded from north to south, including along the rivers Rhine and Rhone to Marseille. However, to the flowering of the Amber trade during the Imperium Romanum, the route through Carnuntum, the Moravian Porte and Wroclaw became the most important amber road.

In Roman antiquity, amber was a sought-after gemstone. Pliny reports of an expedition on behalf of Nero to the Bernese coast. A Roman knight led a group of merchants from Carntunum to the land of the Aesten in today's Baltics. They brought large quantities of amber back to Rome, even nets of the arena were adorned with it. A large number of Roman coin finds along the entire route up to Lithuania suggest a lively trade.

Tiberius formed the old amber road into a military street. From Aquileia via Emona (today's Ljubljana) to Carnuntum on the Danube. The street was a via publica, means used for military and postal belongings of the first order. The tracks ran along gravelled dams with road trenches, wooden and stone bridges, but paving was only available in the cities. Traces of the Roman amber road are now found in Middle Burgenland.

North of the Danube there were no fixed roads. On the basis of findings, however, a route from Carnuntum along the March through the wine quarters and South Moravia. Through Olomouc, the road to Breslau in Silesia passed through the Great Polish region to the Baltic Sea near Gdansk and Lithuania.

In the second century Noricum suffered from the devastation of the Markomann wars. Under Emperor Marc Aurel, the 2nd Italian legion was stationed at the mouth of the river. Its commander was at the same time a provincial administrator with seat in Lauriacum or Ovilava. Increasingly it was also threatened by Germanic tribes, Virunum was abandoned and the capital moved from Inner Noricum to Teurnia. In 407, Alaric's army of the Visigoths invaded the province and demanded it as a settlement country for his followers, as "they would be largely devastated and incur only a small tax revenue." When this was rejected, Alaric entered Italy and marched to Rome and stormed the city.