After visiting Palmanova, we planned to visit the town of Clauiano, which we had been described as being quite worth seeing.

Clauiano was mentioned for the first time in an official parchment in 1013 in which the Patriarch of Aquileia, Poppone, was given an extensive area with many villas, including that of Cleuian, from which the current place name is probably due. A medieval village in Italy, so our thoughts, that can be worth driving.

In the center of Clauiano, the oldest buildings date from the 15th century and are mainly around the church of San Giorgio, which is why the village is said to be one of the most beautiful villages in Italy. Many of the villas and palazzi are of artistic and historical value. The Gardellini house from the 15th century stands out. In Clauiano the piéris and the clàps "speak": large and small stones adorn the portals and form the typical elements of Friulian peasant life such as the fogolâr and the foledôr, ie the granaries, as an example the Villa Ariis, a typical Venetian - Friulian mansion consisting of the residential building, the farm buildings and a large vegetable garden with a wall with battlements and two stone pillars. In the village there is also the Casa Palladino with a typical Friulian courtyard from the 18th century and the typical fireplace with hood and chimney in Venetian shape, the sundial on the main facade, the stone column and the chimneys with which the rooms were heated and where silkworms used to be bred. The Villa Manin deserves a special mention, a splendid 18th century mansion that belonged to one of the most important families in the Serenissima, also known for the majestic Villa Manin in Passariano.

After the Turkish invasion, Clauiano came to Venice in 1477 until its collapse at the end of the 18th century. During this long period of time, the village image is modernized, the houses are arranged next to each other on the streets and thus form a closed block that is absolutely worth seeing. Unfortunately, some objects worth seeing were also locked here, holiday season in November also in Clauiano. In the end, it was Giorgio who approached one of the interesting-looking main houses in the center, into which the courtyard gate afforded a view. A little later we met Elisabetta Foffani, the owner, who invited us to a first tour of the farm in perfect German. Wine production was the main source of income for the Foffani farm, along with a few other options including renting out guest rooms. Run as a family business, from time to time a concert at the piano is offered by one of the sons, who lives in Rome. The occasion is often wine tastings that are held in a festive setting above the dining room. We too were able to get to know a sample of our own wines a little later. In a very relaxed atmosphere, of course, the conversation quickly reached the first explanations of our cultural project and the Foffani family showed great interest in the project itself, but also in the events that we hold as part of the project. A little later we were back in the house, which was supposed to be a really large property. Even an artist gallery was in the making. Now more details that we of course had not suspected at this point. We got to know the estate of the aunt of Elisabetta Foffani, a painter from Naples. 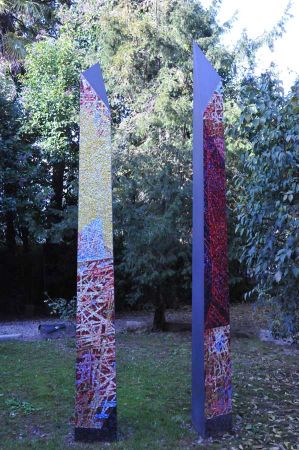 Margherita Gabrielli studied humanities and history of ancient art in Naples. She began her art studies at the Accademia di Belle Arti in Naples together with Vincenzo Ciardo and won the "Prize of the Paesaggio School" in 1941. She graduated and graduated in painting from the Art Academy in Rome, where she worked at the Institute of Master F. Ferrazzi specialized in decoration and in the studies of ancient and medieval art while developing her artistic experience as a painter.

During this time she always stayed in contact with research on artistic topics and also accredited abroad. She studied Goethe's color theory with the well-known painter Beppe Assenza. She taught art history in Lecce and Rome in the state art schools and brought her research into the alternating dialogue between personal and free creativity and the modern, aesthetic and critical study of the art of the past. A specialist in the Middle Ages, she was also known abroad for studying art criticism and making suggestions for the restoration and reconstruction of Giotto's works.

The exhibition Margherita Gabrielli's in the house of the Foffani family was still in the making, but it was already another interesting part of the family business, which is definitely worth a visit. The Venetian-Friulian manor house, including wine production and hospitality, play their part.