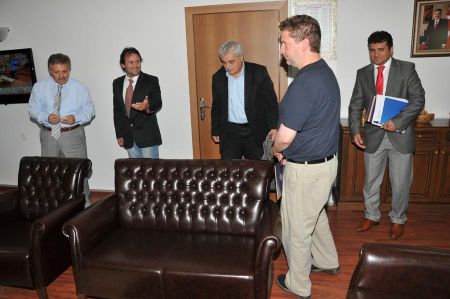 As we were picking up the leader of Goethe Institute from Konya bus station for a visit to Karaman and Mut we had a very interesting meeting.

On the way to the station the assistant to the Governor was already explaining that we will meet with another guest, Professor Harry G. West from the University of London, who is coming to Konya for a very special research in Karaman and some of the villages around.

Under the authority of the British Academy Professor West is travelling into mostly rural areas especially of Asia Minor to watch the production, the trade and the selling of homemade cheese products. In particular he is caring about niche products; some people call them Artesan cheese products, which are produced on the basis of nearly ancient recipes and which are ripened in caves or other strange places before trading or selling them. Another point of the research of Professor West is the question if the old production methods are still kept or if the producers have changed them into more modern ways due to changing markets and industrialisation in production. As well he is doing research on questions of presentation of different sorts of cheese, about places where the cheese is presented and for sure who is buyer of the products if just elderly people who know from their tradition or even young buyers which do not even know the sorts anymore.

You, dear readers, may have an idea already that we quickly got into a very nice discussion as Professor West entered the mini bus. Quickly he was introduced into the group and we all were quite surprised when he started his reports and experiences of cheese research, which guided him into couple of different countries so far. His comment on experiences in Turkey so far: You hear of a new so far unknown sort, search for the place of production  and learn three more interesting sorts from neighbouring villages as well too much interesting not to learn them as well. Very slow world is learning the huge potential of handmade cheese products, learn about really old recipes, learn how to analyse them, do research on their descent and exactly these are the reasons for the research of Professor West. And behind all this there is the development of man kind and the first settlements of human beings which are so far known in Anatolia.

Most of Artesan cheese products are produced by hand in using tradition and knowledge of experienced cheese makers. As a result these sorts of cheese are mostly much more complex in taste and variety. Lot of these sorts are very old in tradition and ripened to get a very special aesthetic taste. Modern mass products are just contrary with that because they are produced in a very quick way, then packed and sold quickly as well.

A very important part in the production of the old cheese sorts is the process to ripen (make the cheese old without bad influences) for the special taste and to develop the textural character of the cheese. There is one sort of Artisan cheese which became famous and well known during the years: farmers cheese, which is made from milk of cow, goat or sheep from the farmers own animals.

We hope for some more interesting reports of Professor West on this really interesting topic.