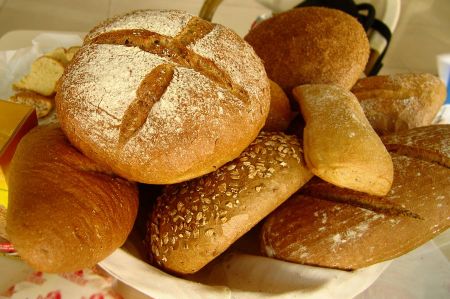 In Turkey, a bit of the crispy sections of white bread is tasted whilst it's hot, crispy and steamy "just out of the oven" fragrance is in the air, before it is even put on the table at home. In Germany, we were always warned not to eat hot bread for otherwise we could get a "tummy ache!"

Very well...that was only for the purpose of edification and to protect the bread from avaricious attacks of children. In Turkey, bread is stored in cupboard style timber cabinets which are placed in front sections of all the grocery stores ( the local corner shops, number of which decrease gradually due to increasing number of large supermarkets and shopping malls) and are full of standard style "city bread". The weight and price of this staple bread is determined by the government.  Currently a loaf of such bread is 250 grams in weight and is sold for 0.50 Lira, which is 50 kuruş. Despite the low price, individual bakeries always compete and try to sell their bread for less than competitors so as to increase sales.

Over the years, I mean within the last 25 years, presentation of bread has mostly attuned to the increasing demands of the public and tourists. Nowadays, the bakeries may demand higher prices for breads of variety. The dark bread with a bit of rye flour mixed is named "German Bread" and is slightly more expensive. Meanwhile, various practical pastry mixes are available for those who wish to bake different kinds of bread at home. Ninety percent of the hotels use such mixes.

One such bakery, ALBESIN was founded in Antalya in 1989 by three Germans and began to produce various types of German bread and marketed them to hotels. Indeed, that was a perfect idea.  However, those smart bakers had not taken the wise Turkish entrepreneurs and the then high inflation (which was up to %80 at one point) into account when launching their business. As a result, despite the fact that the bread was produced and distributed, for months at an end they could not collect monies. And by the time they did collect their dues, price of flour had doubled! The size of normal rye flour mix bread weighing 1 kg was the same as standard white Turkish bread weighing 250 grams! So the bakers had had to convince the Turkish consumer about the differences between the two. They had to keep explaining to the people that consuming two slices of rye flour mix bread would be equal to consuming one full standard white bread.

Those educated bakers were in the meantime repeatedly facing the problem of levels of quality of bread. The recipe and additives were the same, the temperature of the oven and the baking time stayed the same but the results differed every time. Their pastry product range included such scrumptious breads as  rye mix bread, Cossack bread, bread with three different grains, black bread, linseed bread, hazelnut bread, onion bread, toast bread  as well as salty simits, sultana cakes, apple cookies, "Berliner" deserts, croissants and other desert varieties. It was possible to find the products of the German bakers of Antalya in many hotels, markets and delicatessens in Ankara to Adana, in Alanya and Mersin, Fethiye, Izmir, Bursa and Istanbul. Even the staff of German consulate in Ankara had got into the habit of ordering bread and sultana cookies once a month.  The biggest customer of the bakers was Usaş, which was the only airport catering company at Antalya airport at the time. They supplied the company with those round buns and croissants that were offered in planes.

Albesin Bakery had indeed contributed a lot into promoting German bread in Turkey but, it was closed in 1996 due to financial hardship.

A few years passes before a new German entrepreneur, Mr. Dietz opens the Dietz Bakery in Alanya. He fast gained fame in a few months with his bakery on the seashore. Indeed, he was so successful that he opened two Dietz Branches in Antalya. Today, many Turkish bakeries strive to produce similar products to Dietz' and some are surely successful.

However, the only business that is truly continuing the tradition is the Backstube bakery, located on a small side street in Lara region of Antalya.

The fame of "royal" products produced there seems to have spread at once around Antalya. Extremely cautious in finer details, Mr. Kemal Aral, who has a good command of German, has apparently learned the trade in Germany and currently works by himself in production and marketing.

Do visit his shop. You won't be disappointed and will in fact feel happy to have found him.
My only remark will be: "Yummy Bienenstich" tart...

When talking of bread, of course one should not forget the cakes shops or with their newly acquired names, the patisseries. One will find a great variety of delicious cakes, deserts, baklavas, sweet or salty biscuit varieties.

Cafe Salman Patisserie, located in Işıklar, is leading the way for 27 years in Antalya. This is a perfect and most preferred meeting point for those with palatal delight. One may find the shop opposite the old stadium next to a Tchibo franchise. By the way, you will be able to find delicious cake slices at  Tchibo as well, not to mention the many other "pastanes-cake shops" scattered along the beautifully designed Işıklar Street (along the tramway), which serve deliciously tantalizing calorie bombs!

A suggestion from me:

Go in pairs and ask for two forks and single portion, just for –taste purposes-

The panoramic view of the Deutsches Eck near …