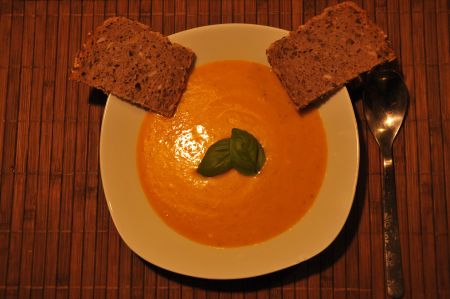 The discoloration of the leaves on the trees and other typical signs of approaching autumn slowly appear - unfortunately this often is accompanied by the first colds together with infection.

Well, quite positive, if then an ancient home remedy at hand, which with the ginger was, especially in Asian medicine, an application for centuries. Even better getting cold outside, when you can take a seat at the dinner table and an aromatic scented ginger-curry carrot soup is being served.

The smell of ginger is aromatic, the taste burning little hot and very spicy. Essential components in ginger are the essential oils, resin acids and neutral resin and ginger oil, a sharp aromatic substance. The ginger oil is that part which is responsible for the sharpness. The underground main stem of the ginger, the ginger rhizome, which is often called ginger root is used as a cooking spice or for medicinal products.

The ginger rhizome contains a viscous balsam, which consists of essential oils and a pungent material content, the ginger oil and shoga oil. Preparations of the ginger rhizome are awarded antioxidant, anti-emetic, anti-inflammatory and create stimulating effects on the gastric juice, saliva and bile formation and bowel function and therefore particularly in traditional Asian medicine are prescribed for the treatment of rheumatism, muscle aches or colds. Various Commission advocate the use of ginger roots in gastrointestinal discomfort and nausea.

Ginger often acts very supportive with existing illnesses and is a proven home remedy. Everyone, no matter what age, can benefit from this small root. And just in the fall and winter the mild-spicy ginger creates heating from the inside, which can maintain a cold front and malaise.

Although many sailors swear to the effect of ginger against seasickness there has been little evidence to the effectiveness of ginger in the treatment of seasickness. Ginger may even have an inhibitory effect on blood clotting, as described in some case reports. But now let us turn back to ginger curry carrot soup which is delicious and also conveyed to health.

The onion, two cloves of peeled garlic, shall be coarsely chop and fry in olive oil.
The ginger cut into cubes and added, the amount is depending on your taste, the more ginger, the more focus, the soup has later. Wash approximately 1 kilo of carrots, peel them and roughly chop and add to the pot and sauté briefly. Curry and maple syrup (brown sugar or honey do it), add stir and fill with about 2 liters of broth.

Then simmer for about 30 minutes and then purée in a blender or with a hand blender. Add some salt, pepper, nutmeg, curry and cream and again let it simmer briefly, .... done.

Add the ginger curry carrot soup on a plate and garnish with basil leaves.

Ingredients (due to taste ingredients are definitely interchangeable)

Enjoy your meal and have fun in the preparation!

Since ginger has anti-inflammatory effects and the sharp ingredients irritate the mucus, better shows expectorant effect, ginger is quite good tea for infection and colds. Cut the ginger into thin slices, pour boiling water over it and can then wait for some time. Even the tea can quietly simmer a little longer, since its ginger contents are released well in the water.