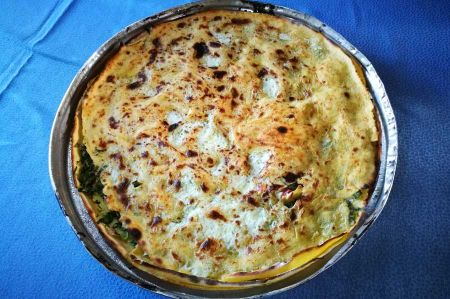 In every country, and often even in the respective sub regions, there are special foods and dishes that not only make experiencing unforeseen taste sensations but also often new cooking ideas in general.

Of course that also applies to Macedonia, which, like the rest of the Balkan countries, has something to offer in culinary terms (although it is not always the culinary highlights that are so pleasantly surprising, but often the local home cooking). At Camping Rino we noticed an at least surprised look from our host Pimi, when we wanted to order two pizza with leeks for dinner. A smile crossed his face as he described the leek pizza prepared by his mother here in Macedonian home-cooked food, which would be large enough for at least two people.

Leek in the gardens of the city of Ur 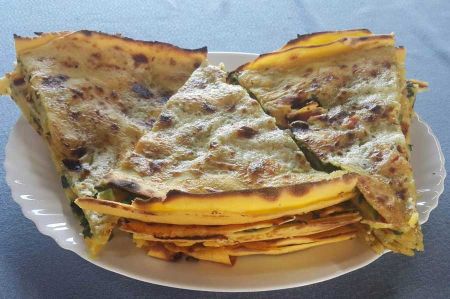 Of course, our interest was aroused, especially as wehad seen Pimis grandma in the early afternoon cutting lots of leeks, what we could observe. The leek is ultimately a cultivated form of the field plant (Allium ampeloprasum), which occurs wild throughout the Mediterranean and is cultivated in various forms. Incidentally, leek was already known as food extension around 2100 BC. The Sumerian ruler Urnammu had cultivated leek in the gardens of the city of Ur. Even in ancient Egypt leeks were used in the kitchen. According to Herodotus, it is said about the rulers of Egypt to have served leek as the staple food for the workers who built the pyramids. Leeks were highly valued in ancient times throughout the Mediterranean. The leek has probably come from Italy to Central Europe in the Middle Ages.

Leek contains vitamin C, vitamin K and folic acid as well as the minerals potassium, calcium, magnesium and the trace elements iron and manganese. Leek is used as a vegetable (usually winter-garlic) and also as a kitchen spice (usually summer-garlic); You can eat it cold or hot as a vegetable or salad. Together with carrots and celery, leek is used as a spice in soups as so-called soup greens. It also finds further use in the North Hessian specialty bacon cake or as leek cake in cold and hot version. We now learn here at Lake Ohrid that leeks are also perfect as a topping for a corn pizza.

As an alternative to leek, the spinach applies 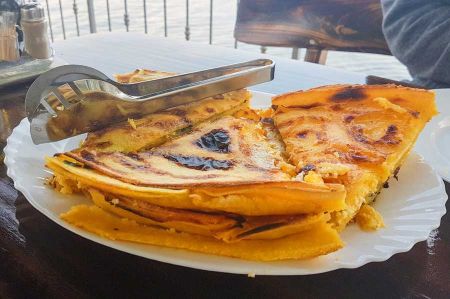 In the German kitchen we usually know spinach in pureed form and traditionally accompanied by eggs and potatoes, in Swabia often served with spaetzle. In order to soften both the slightly metallic-bitter taste and to reduce the nitrate content, spinach may be blanched before further preparation. Blanching leaves much of the water-soluble nitrate in the cooking water, but it also causes some of the other ingredients to be lost.

A forerunner of the spinach known to us was probably cultivated in Persia as "ispanā" and was brought to Spain by the Arabs as "isbanāh". It was first reported there in the 9th century. In Spain, the name changed to "espinaca". In Central Europe, Albertus Magnus mentioned it for the first time in the 13th century: "It exceeds the registration, has borage-like leaves, flowers similar in appearance and prickly fruits." In Mainz's Hortus Sanitatis of 1485 spinach is described as a medicinal plant. The botanist Leonhart Fuchs called it in his herbal book in 1543 "Spinachia" and wrote: "Spinach or Spinet would be synonymous Beynetsch genent ... in Hispanic Arabic ... as Hispanachkraut, maybe because, that it came from Hispania first, then has been brought to other nation... It helped on Indigestion and is also used externally. "At this time, spinach was already widespread and displaced as a vegetable increasingly popular in the Middle Ages, related gardening.

The typical local pizza at Camping Rino is not made with wheat flour and yeast dough, but with corn flour, it is therefore rather to understand as a thick, to bake polenta, because it resembles a yeast dough. Important here is the always fresh production, which is a bit more time-consuming than a yeast pizza. So the best pizza should be pre-ordered, so that it does not take too long, for example, if you come back hungry from a day's hike. Of course, we were looking forward to our corn pizza and ...... were so excited that we asked for the recipe.

Here's a quick guide to the corn puff pizza:

Make a thick polenta out of vegetable stock and corn grits.
Wash and cut the leek as small as possible, the onion and garlic as well. Then steam the onion and garlic in olive oil.
Then add the thick polenta to a large, flat baking dish and spread thinly. Spread the chopped leek on the polenta, along with the steamed onion and garlic, some salt and pepper. The small-buffed sheep or goat cheese (we like it mildly mild) in the topping with distribute.
Apply a second layer of polenta to this layer and distribute. Then put the pizza in the oven and bake at 200 ° C for about 20 minutes until the cheese has melted. For further refinement, finely whisked eggs can also be applied to the topping.

1 liter vegetable broth / alternatively also other broth, according to taste
250 grams of corn semolina, fine or medium-fine
3 bars of leek alternatively also spinach / deep frozen or fresh
Sheep or goat cheese, or Gouda, depending on your taste
2 tablespoons olive oil
1 onion and a clove of garlic
Butter for the large sheet metal shape for the purpose of aging
a little salt and pepper