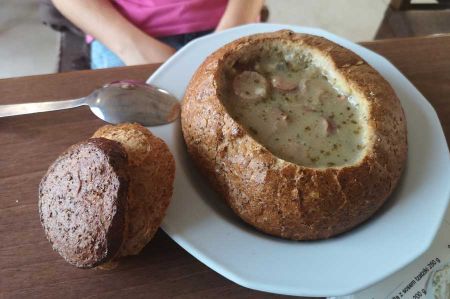 We were in Rewa with friends when we came across this local specialty in a restaurant that we had not seen before: Zurek Soup in the Bread Bowl.

Anyone who would like to serve his guests a soup in a somewhat unusual way in the future, may read on and, if the occasion arises, replace the soup plate with a soup bowl made of bread.

A soup plate of bread? The idea is basically not just very decorative, but also quite practical: Because the lid and bowl wall (at least partially) serves as an edible side dish. Because who likes, can eat the inner layer of dough, which has been soaked with soup. And since the loaf on the outside stays nice and crunchy, you can also break off pieces of bread from the edge.

Mixed rye bread as a bowl for Zurek soup

Traditionally used in Poland as an edible soup plate are mainly small round rye mixed loaves, either fresh and crispy bought from the bakery or much better home made. Mixed rye breads do not soften so quickly, even after filling with hot liquid still retain their shape and convince with their powerful aroma. Whether borsch, goulash, vegetable stew or cheese soup - apart from very fine broths, almost every soup can be served in the loaf of bread. The more hearty, the better, so we try the typical Zurek soup.

Zurek soup tastes much better than the name suggests, because translated Zurek actually means "fermented rye meal". This main ingredient owes its name to the Polish Zurek soup, which is considered to be a local specialty, especially at Easter, and its tart note. Often this sour note is enhanced with kefir or buttermilk. In addition, Kabanossi sausages, potatoes and garlic belong to the spicy specialty.

Preparation of the Zurek soup - Fermentation of rye meal 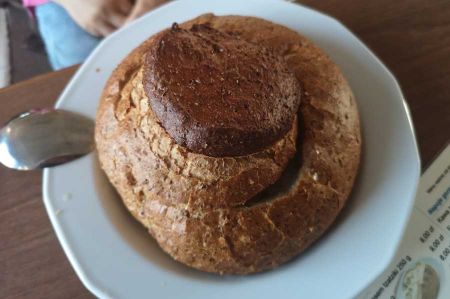 A good Zurek soup is planned, because the fermentation process of the rye meal takes time. Already two to three days before you want to prepare the soup, the actual Zurek, the fermentation of rye meal, must be prepared. Put the rye meal in a container / preserving jar with about 400 milliliters of warm water. As a closure a piece with a pin finely punched piece of baking paper can serve. Place the container in a warm place for one to two days. Traditionally, Zurek is set in a clay container.

Once the Zurek has finished fermenting, it continues to the additions. Peel and dice potatoes, garlic and onion. Then slice the Kabanossi sausages and place them together with the vegetables in a pot. Sweat all of the mixture. The broth is used to quench the aromatic mixture in the pot, season with the dried marjoram and simmer for another 20 minutes. Use the time waiting to cook two eggs and then scare them off. Then it's time to peel and halve the boiled eggs.

Add the fermented rye meal to the soup and let it cook for a little more than five minutes. If the mixture is too thick, you can add some broth.

Remove the almost finished Zurek soup from the heat and stir in the sour cream or the kefir according to taste. Then taste the dish with salt and pepper.

Here are the ingredients for 4 people:

Bake the edible bread bowl yourself (for four soup bowls): 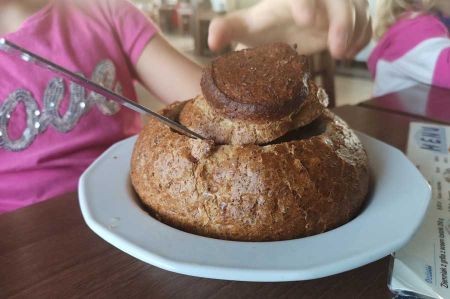 Mix 500 grams of whole meal rye flour and 400 grams of wheat flour in a large bowl and squeeze a bowl into the center. Crumble two cubes of yeast and pour two teaspoons of honey on top of it. Heat about 500 milliliters of water, about 200 milliliters in the bowl and stir with a wooden spoon from the inside out. Cover with a cloth and let this dough rise for 15 minutes.

Add to taste a little salt and the remaining 300 milliliters of water in the bowl and knead vigorously for five minutes. Make yeast dough into four balls (for 4 people!), Place it on a tray covered with baking paper, cover it with a cloth and let it rest for another 30 minutes in a warm place.

Bake in preheated oven at 200 degrees for about 50 to 60 minutes. When baking, put a small bowl of water in the oven. The steam makes the crust nice and crispy.

Before serving, a small lid is cut off the top of the round loaves and the interior is gently released. Either the soft filling is cut in a lattice with the knife and then removed by hand or you work out with a tablespoon. The main thing is not to remove too much dough so that the bread does not get soaked at the table too quickly. For home-baked bread: before you cave in, it should cool down completely, otherwise the crust can break.

A little tip: before serving the bread bowl in the oven, then the crust is wonderfully crispy.

Now spread the Zurek soup on the four bread bowls and add half an egg each, then add some parsley for some color, and you're done!