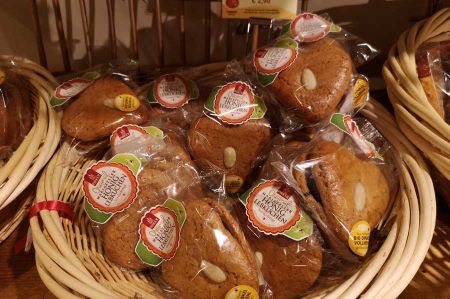 Our friend Bertl had invited us for a walk in the city centre of Vienna, an invitation we gladly accepted, as there is always something special to see or do with him.

From our location Camping Wien West we first walked to line 4 at the subway station Hütteldorf, then passing 9 stations to Karlsplatz. From here it is just a few hundred meters to the centre of St. Stephen's Cathedral. A deep humming from behind together with a light touch of the shoulders caused a small shock on the stairs to Karlsplatz - Bertl had reached our meeting point almost simultaneously.

A tour with explanatory hiking of Vienna is a must, as Bertl says! 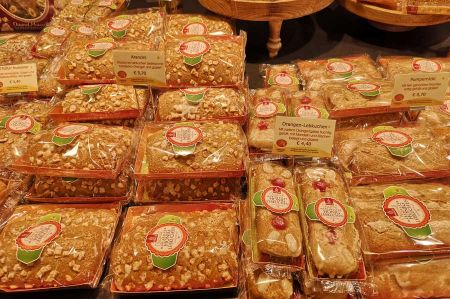 After a few steps, the first explanations regarding the buildings on the way followed, because it went along the Opera Ring towards Heldenplatz and Hofburg from Vienna. No wonder that we soon stopped in front of a building that tempted us with smelly offers in the shop window - honey gingerbread. Known and enjoyed everywhere at Christmas time, we were surprised to find a company that not only runs a large shop for sales, but also the manufacturing itself, and a family run business that has been established for many years.

It is characteristic of all gingerbread that they are traditionally made with honey as a sweetener, with little, if any, water, milk and fat added. The dry, sugar-rich texture results in a very long shelf life. A very typical feature is that gingerbread is seasoned strongly, so that they taste extraordinarily strong and sweet overall. Typical gingerbread spices are anise, fennel, ginger, cardamom, coriander, mace, nutmeg, cloves, allspice and cinnamon. However, it is questionable what the original gingerbread recipes of the 13th century looked like, where there were no better spices like cardamom or anise from the New World. 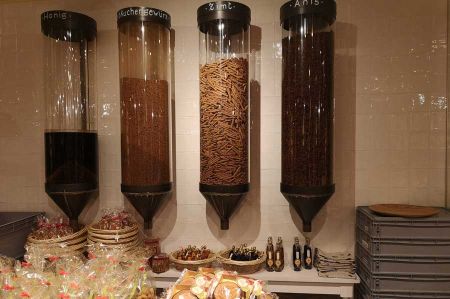 The first written evidence of small spiced honey cakes was made around 350 BC, but previously the ancient Egyptians had known honey-sweetened cakes, as is known from ancient grave goods. The Romans knew panis mellitus: honey was spread on a cake, then baked with the cake. Unlike today, the gingerbread was not only consumed at Christmas time, but also at Easter or other times. The gingerbread was part of the fasting kitchen and was also served with strong beer.

The gingerbread in the form still known today was originally invented in Dinant, Belgium, then adopted and modified by the Aacheners (Aachener Printen) and finally adopted by the Franconian monasteries and slightly modified again. The nuns made the pastry for dessert. It is mentioned in Ulm as "gingerbread" as early as 1296. In the 14th century, the gingerbread was known in and around Nuremberg, where it was baked in men's monasteries. The Nuremberg gingerbread has its origin in the nearby monastery in Heilsbronn. Gingerbread was popular because of its long shelf life, because it could be stored and was distributed by the monks in bad times. 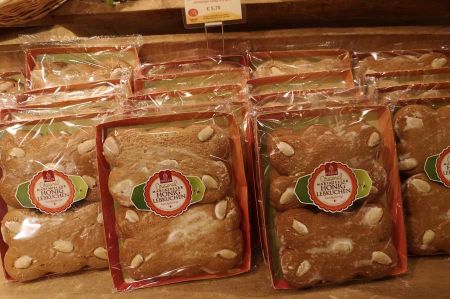 Since rare spices from distant countries were needed for the production, cities in particular at important trading hubs have a long gingerbread tradition. In addition to Nuremberg and Pulsnitz, these included Augsburg, Ulm, Cologne and Basel. In Munich as early as 1370, a “Lebzelter” was listed in the tax register, a gingerbread baker. While in Munich the pastries were cut out with shapes and decorated with coloured sugar, the Nuremberg cakes were decorated with almonds or lemon.

In addition to the Ratibor gingerbread, the Thorner gingerbread, also known as the Thorner cobblestones, from the West Prussian city of Thorn, which was nicknamed after the monastery of St. Catherine of Alexandria “Kathrinchen” or the Neisser confectionery, also called Neisse gingerbread, from Neisse in Silesia, which is occupied from the 16th century.

Gingerbread was also baked on wafers in monastery bakeries where hosts were already made. In southern Germany and Austria, the flat cake tents and thus the bakers were called Lebzelter. The Lebküchler or Lebzelter were united in guilds.

The advent of baking powder at the end of the 19th century also had an impact on the development of the gingerbread. The baking powder let the spicy dough rise. This resulted in many types of pastries, some of which are dense in taste and consistency and some further away from the original gingerbread, such as numerous variants of honey or spice cake.

The preparation of honey gingerbread is a fragrance experience and is ideal as a pastry for the Advent or Christmas bakery. The Nuremberg original, the Nuremberg Elisen gingerbread, is still hard to beat. Of course, each manufacturer has its own recipe and sometimes makes it a secret. So our Lebzelter did after questioning, for that here is just a relatively well-known Hausmanns recipe 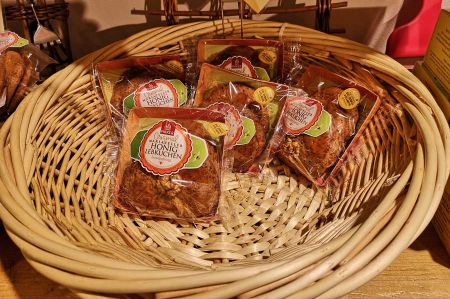 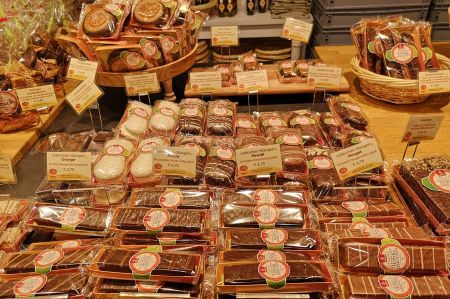 The best flavour for the cookies develops after about a week.