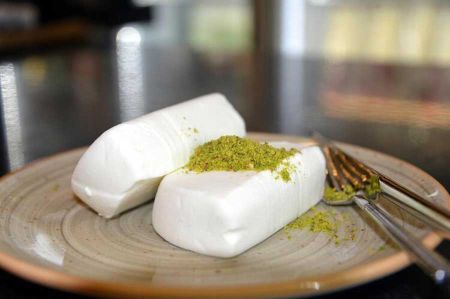 Who of us adults and children is not a fan of ice cream, this delicious, cool mass that is now available in countless flavors in the relevant ice cream parlors.

Even at home, the range of ice cream flavors and varieties is more diverse than ever before.
Colorful, sometimes huge sundaes of ice cream, which are also served with cream and / or fruit, are not unjustifiably regarded as calorie bombs, so one tries to take some

pressure off of the not entirely unjustified criticism with a low sugar content and / or yoghurt types. The search for new ideas and flavors is just one way. 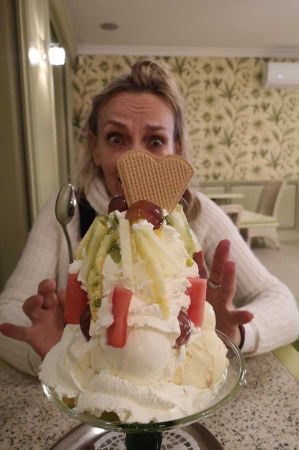 So far, our favorites in ice cream production have always been considered to have at least their roots in Italy. Last but not least, you can find the addition “Italian” ice cream parlor almost everywhere on company signs. Hardly anyone tries “German” ice cream here, and there are numerous ice cream parlors with new types of ice cream, which are certainly original German creations. So why not try Dondurma?

Dondurma literally only means “frozen”, but it is actually the Turkish name for ice cream. However, the basic ingredients, apart from the milk and sugar used, are completely different from Italian ice creams: mastic and salep. Originally, Dondurma is said to come from the area around Kahramanmaraş and is therefore also known under the name "Maraş ice cream", in Maraş Dondurması in Turkey.

The special manufacturing process of Dondurma 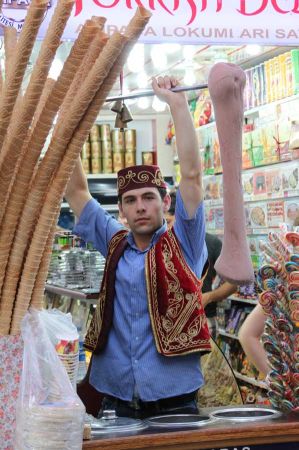 In the production of Dondurma, the ingredients are brought to a boil with water or milk and then frozen. Adding Salep in a ratio of 1:40 - 1:50 to milk or water gives the ice cream a viscous, almost sticky consistency. This is also the main difference to the other types of ice cream known in Europe. Another effect of adding Salep is the delayed melting of the ice. This makes Dondurma particularly popular in the warmer regions of Turkey. A relatively high proportion of salep is used in the region around Kahramanmaraş. This makes the ice cream so tough that it can only be eaten with a spoon and fork.

In Turkey, Dondurma is mostly sold by street vendors. The ice cream is mixed by them on site in large metal bowls and then cooled. By constant stirring, the mass retains its elastic consistency. Buying Dondurma in Turkey is often associated with entertaining street entertainment, as the street vendors celebrate the handover of the ice cream and combine it with fun. Anyone who has experienced this procedure will not forget it.

Salep - quite a rare raw material 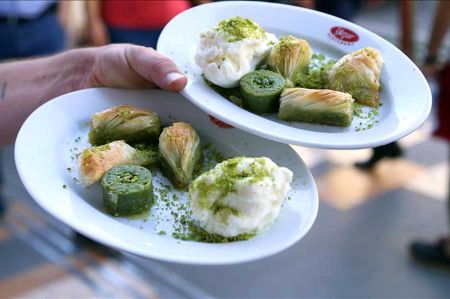 Salep is obtained from the tubers of some terrestrial orchids. These are now specially protected within the EU and the trade in Salep has been banned. Dondurma, which is made with Salep, is therefore almost exclusively available in Turkey. In the EU, tapioca starch is mostly used to make Dondurma.

In 2003 in particular, researchers warned about the impact of increasing ice production on the orchid population. Some orchid species, which are only native to Turkey, were threatened with extinction due to the increasing demand for salep. This initially led to protective measures and then later to the cultivation of orchids within Turkey.