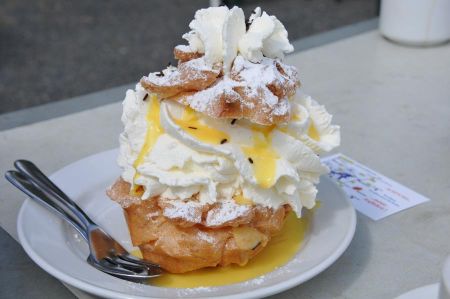 We had arranged to meet friends for a coffee in the Harz mountains. Since we hadn't seen each other for a while and therefore had to exchange and discuss a lot of information, we chose a restaurant at the Oker Talsperre as a meeting point, which is known far beyond the borders of the Harz Nature Park for its large and always fresh cream puffs.

In terms of tourism, the Oker Talsperre and its surroundings are known to offer some interesting opportunities for leisure activities, be it in winter or in summer. In addition to extensive hiking tours through the Harz Nature Park, there is even an excursion boat on the dam.

A trip to the Okertalsperre 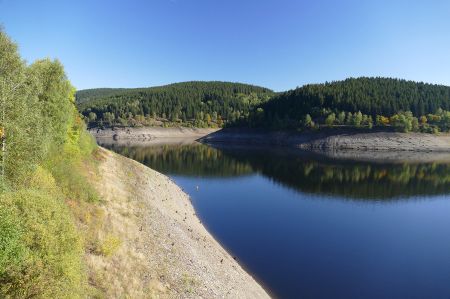 Also known are the Romkerhaller waterfall and the smallest kingdom in the world opposite the waterfall, we have already reported about it. In the immediate vicinity there are the holiday resorts of Altenau and Clausthal-Zellerfeld with its ancient wooden church or the Torfhaus with its legendary view of the Brocken, which can also be hiked from the Torfhaus.

Due to construction work on the bridge construction over the Oker dam, we initially had problems reaching our meeting point at all. So we only had to return in the direction of Clausthal-Zellerfeld and then turn left in the direction of Altenau. Only shortly before the turn-off was the road along the banks of the Oker dam reached, which was then open to visitors despite the closure up to the restaurant. A little later we had already arrived at the parking lot, where we were already expected. 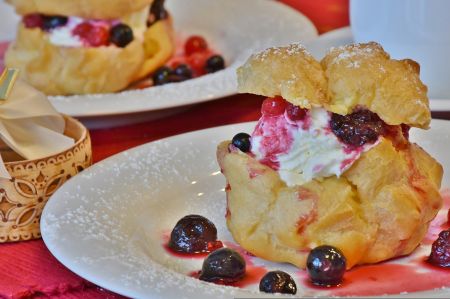 Since the weather also played along, we looked for a free table on the terrace, which was free right on the shore of the reservoir. In keeping with its reputation, there was a large number of cream puffs with different fillings, ranging from sweet to savory. The decisions for a cream puff each with cream, eggnog and hazelnut ice cream and a cream puff served with cream and hot cherries were quickly made. And without a doubt, simply delicious. Even the detour due to the construction site was quickly forgotten.

Cream puffs are mostly fist-sized, hollow pastries made from burnt mass. They are often filled with whipped cream or vanilla cream, possibly also with fruit. Since the choux pastry is not sweetened, cream puffs can be filled with either sweet or savory fillings. As a basis for fillings such. B. quark, cream cheese and pureed avocado.

Here is a cream puff recipe: 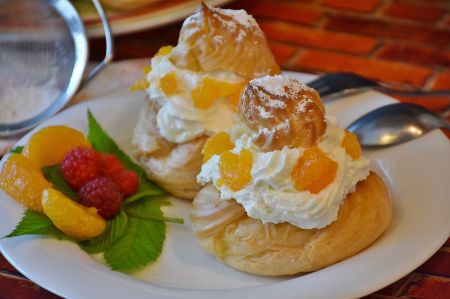 To prepare it, small portions of charcoal are placed on a baking sheet with a spoon or sprayed with a piping bag. Cream puffs are cut open on the side while still hot and filled after cooling. 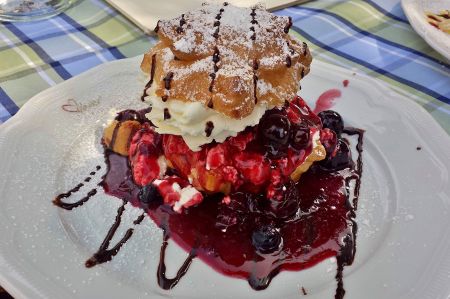 Bring the water, salt and fat to a boil in a narrow saucepan. Take the pot off the heat, add the flour and stir until smooth, "burn" on the heat until the mixture comes off the pot as a lump and a white skin forms on the bottom of the pot. Allow to cool and stir in the beaten eggs one at a time.

Place heaps of the desired size on the baking tray and bake at 225°C on the middle shelf for 30-40 minutes (leave enough space between the individual heaps to allow them to rise).

Ohrid Lake - The place of the Living Fossils