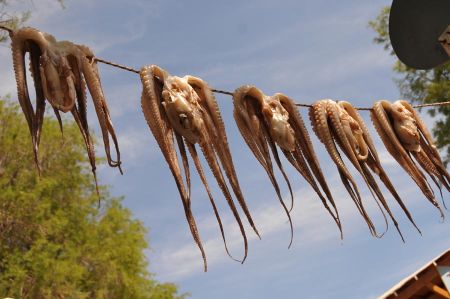 During our tour of Lesbos we had come to Skala Sikamineas, a dreamy fishing village on the island that we had already mentioned in our Lesvos article. In addition to the baked feta cheese, we were tempted by the fresh calamari that had been hung on a line to dry along the way.

Titled as the upper group with squid, the squid are actually, from a biological point of view, animals that belong to the genus snails. For this reason, the term ink snail is often found in popular science.

Cuttlefish belong to the group of cephalopods 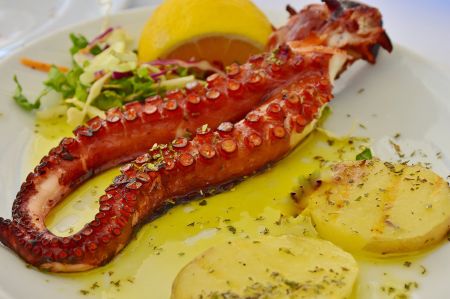 Fish are vertebrates and squid do not have vertebrae. Accordingly, the squid belong to the group of cephalopods. Responsible for the naming is the "possession" of an ink bag, which the animals use for self-defence in case of danger, in order to make themselves invisible by spraying ink. However, not all cephalopods have this ability. Today about 800 species are known, which occur in almost all of the world's oceans.

The two largest groups of squid are called squids and octopods. They are among the most intelligent molluscs on earth, surpassing all other molluscs in terms of mobility and responsiveness. The squid's nervous system shows a high degree of centralization with a brain in the back of the head. The ink sac in the octopod is much larger than in the squid and can therefore be used several times in a row.

Our scuba diving friends have reported several times about the squid's defence strategy, which rapidly ejects a cloud of ink secretion, which then remains where the squid was moments before. The attacker, or rather the hunter, snaps into the cloud and ..... misses his target. Due to its quick reaction, the squid has long since disappeared by recoil. The principle of the "smoke screen" is therefore more that of deception that the victim is still in place than that of camouflage. Incidentally, the ink secretion consists of copper proteins that are sprayed in the water.

The principle of the "smoke screen" 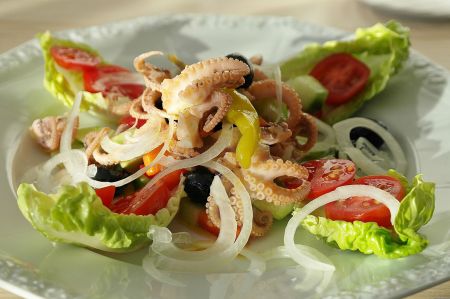 Squids are one of the oldest animal groups on earth and humans have been using this animal species for food for a correspondingly long time.

We usually find squid under the terms squid, calamari or calamaio, which say little about the actual species.

The most popular are squids from the cuttlefish, squid and octopus groups, which are widespread in the world's oceans.

The tentacles and the body after removing the head, the chewing tools, the suction cups and the innards are mostly used, although this varies according to the size of the animals. Commercially, squid rings and fillets are the most common. 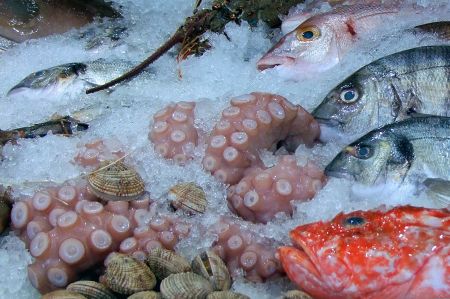 In our restaurant here in Skala Sikamineas, the cleaned tentacles are dressed with garlic and fried, which is probably one of the standard preparations and therefore does not mean any great secrets in the recipe, only some ingredients are supplemented or replaced regionally. Our chef willingly shared his recipe with us, because it tasted excellent.

The recipe from Skala Sikamineas: 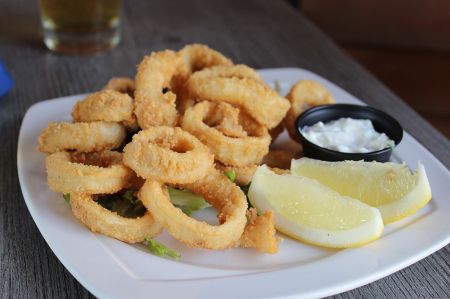 Finely chop or chop the peeled garlic cloves. Cut the spring onions into thin rings. Also finely chop the parsley. Choose medium size pan, fill in olive oil and heat. Sauté the garlic over low heat, then add the parsley and squid. Steam the mixture for about 1 minute, stirring constantly, then add the wine, vinegar and 3 tablespoons of water. Season with a little salt and a pinch of sugar and serve. Serve with baguette or Turkish pide, done.

It is important that the squid only simmer briefly over a mild heat. Otherwise, it can easily taste like rubber.