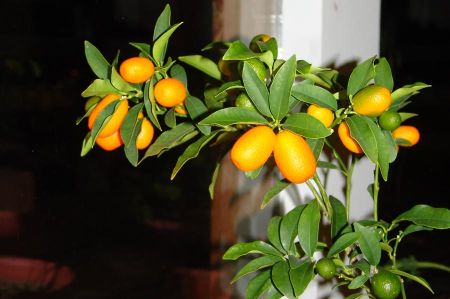 The kumquats or cumquats are a family of small fruit-bearing trees in the flowering plant family Rutaceae, in the genus Fortunella which is often included in the genus Citrus.

The edible fruit closely resembles that of the orange (Citrus sinensis), but is smaller and is often oval.

They are slow-growing evergreen shrubs or short trees, from 2.5 to 4.5 metres (8 to 15 ft) tall, with sparse branches, sometimes bearing small thorns. The leaves are dark glossy green, and the flowers pure yellow, similar to other citrus flowers, borne singly or clustered in the leaf-axils. The kumquat tree produces 30 to 50 fruit each year. The tree can be hydrophytic, and fruit is often found floating near the shore during the kumquat season.

Kumquats originated in China, appearing in literature dating to the 12th century. They have long been cultivated in Japan, and were introduced to Europe in 1846 by Robert Fortune, collector for the London Horticultural Society, and shortly thereafter into North America. Originally placed in the genus Citrus, they were transferred to the genus Fortunella in 1915, though subsequent work (Burkill 1931, Mabberley 1998) favours their return to Citrus.

Kumquat, rich in vitamin C, plays an important role in the prevention of infection when consumed with its shell. Kumquat, which also contains A, B1, B2, B3 and calcium and some copper, allows the nervous system to work healthier. The skin of Kumquat tastes tartly sweet. The pulp, on the other hand, is bitter to sour. The color of Kumquat is dark orange to golden yellow. The large edible seeds of this fruit are distributed in the pulp divided into six segments.

The kumquat is consumed raw as fresh fruit. It is completely eaten with shell and seeds. If you take the fruit of the Kumquat in your hand and roll it back and forth in it, the shell unfolds its special scent, becomes sweeter and less bitter. Rolling in the hand causes the shell to dissolve essential oils and soften them.

Kumquat is usually eaten with its shell and other fresh fruits.
Often kumkuat is prepared as jam, compote, jam or jelly.
Kumkuat has a completely different taste.
Kumkuat is also used as a fruit juice and gravy.
It is a popular dessert and an addition to the salad in exclusive restaurants.
The kumquat is also eaten dried.
Even in rum, the kumquat is a treat when put in rum with pears, pineapple, mango, lychee or prickly pear.

Kumquat is an option for cocktails and soft drinks too

Their taste is also very good for preparing cocktails. It is an excellent way to refine desserts, fruit salads and desserts. Kumquats are generally suitable for all meals that you would use oranges. Wrapped in chocolate, the kumquat is a particularly delicious treat. You can also put them in sugar syrup. When baking, the kumquat can be used instead of orangeate, also ground. There are many recipes for this exotic fruit.

Very delicious option to use Kumquat

Halved kumquats can be filled with whipped cream or marzipan, for example. For the friend of alcoholic delights, it is recommended to place the kumquats in whiskey together with a cinnamon stick, similar to the rum pot. This whiskey pot stops for four weeks. In this country, it is valued less because of its taste, but more because of its external appearance. The kumquat is ideal for decoration.
On every cold buffet, on cold plates, meat and fish dishes and on the plate, the kumquat is always an eye-catcher, both as whole fruit and cut open.

Still rarely found at European weekly markets or in supermarkets, Kumquats, of course, depending on the season, can be found everywhere on many street markets in Turkey, including Antalya markets in Turkish called Antalya semt pazalari

A short video about the kumquat plant