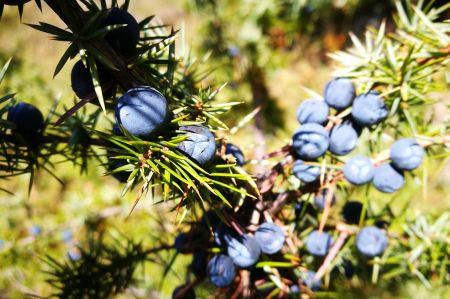 The surroundings of the Campsite Rino in Struga also offers a real lure and challenge for hikes in the area, in addition, the autumnal leaves of the trees lured in unimaginable splendor of color, plus the still lovely sun.

After first tour experiences with Jana and her daughter Lucinka in Vevčani we had planned a mountain tour, which should lead us up to the local mountain lakes.

It is autumn in the mountains of Macedonia

Not only the splendor of autumn deciduous trees kept us pausing again and again, so it were also bushes and trees with still existing fruit that invited us to contemplate and to philosophize. It is always very interesting to talk to people from other cultures about the names and uses of the fruits, as well as to learn about their history in the cultural circles. This time our interest was concentrated particular on the very adaptable Juniper.

Juniper - versatile in the use of its ingredients

Juniper species thrive in climatic regions ranging from the subarctic tundra to the semi-desert. Almost all species are well adapted to low rain periods. In mountain regions, it is often juniper species that still thrive at the tree line. The short-leaved juniper, which grows in the Azores, is the only coniferous species that has been able to establish itself on a volcanic island chain lying in the middle of the ocean. The seeds of the ancestors of this species probably got there in the digestive tract of birds.

Juniper wood, twigs and berries are often used to smoke meat and fish, as juniper smoke is considered to be cleansing and disinfecting and has been used since the Middle Ages.

Juniper as a tea, so says the vernacular in many regions, promotes digestion, urinary excretion and acts against heartburn. It supports rheumatism and gout therapy. Juniper is not allowed as a diuretic. The diuretic effect is caused by the kidney-stimulating ingredients of the pseudopods. Juniper may therefore only be used in combination with other diuretics, as the use of juniper as a single drug can otherwise easily lead to overdose and resulting kidney damage. In the Middle Ages, juniper berries were used, among other things, as an ingredient in ointments in the treatment of joint diseases.

The berries are an important raw material in the production of alcohol. It creates juniper schnapps or gin. Spirits such as Krambambuli, Steinhäger and Genever get their special flavor by the juniper berry.
Furthermore, juniper berries are also used as a flavoring for lemonades, such as root beer or in Sweden Enbärsdricka. Young shoots of juniper are used in Scandinavia in beer production.

The juniper is also used as a spread

In some regions of Switzerland, a concentrate (juice) is made from juniper berries, which is then processed together with glucose syrup, raw sugar, water and caramel sugar to make the spread Latwerge. The recipe for this spread has long been handed down orally. Since a few years, Latwerge is offered at major distributors and health food stores. The cones of the Syrian Juniper are collected by Anatolian mountain farmers and used as vitamin and sugar rich Mus called Andiz Pekmezi.

Juniper berries in the kitchen use

In the dried state, the juniper berry (Kronwittbirl), also called Krammatberry and locally spicy berry, like in the preparation of sauerkraut, as well used in many kinds of meat preparations (Sauerbraten, roast wild game).
It is also important in the production of smoked meat or fish. The berries are added to the brine mixtures in a crushed state, both in salt mixtures and in watery pickle liqueurs. The taste of the juniper berry promotes the development of flavor in the smoking of meat or fish. In old recipes you will find information like this: 8-12 juniper berries per kilogram of bacon or ham.
Also the wood of the juniper shrub is added in the form of chips to the usual smoked flour, in order to achieve an aromatization by the smoke. In old recipes one frequently finds, one Kranewitt branches (juniper branches) add to the smoky heat, in order to improve the taste. Too high dosage of berries or wood, however, leads to a soapy taste.