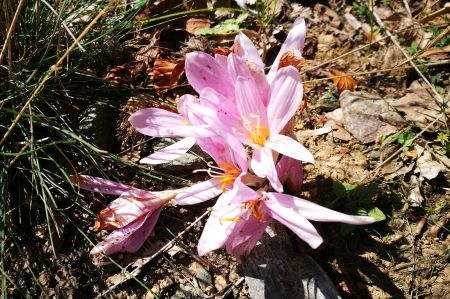 In one of the fairytale legends of Greek mythology, Zeus is reported to be sleeping on a bed filled with saffron. Wealthy Romans scattered saffron threads on their wedding beds, which probably led to the Latin saying "dormivit in sacco croci" meaning "he slept in a bed of saffron".

This meant the state of unspoilt cheerfulness. The Phoenicians used saffron not only as a spice, but also as a remedy. In many cultures it was customary to dye the wedding veil to yellow with saffron. Once introduced to the silk road from India, saffron was already a real luxury article in ancient times.

Homer reported that every required price for saffron was paid. In the Middle Ages it was three times as expensive as pepper. Saffron was used to prepare ointments, medicinal pavers, balsams and aromatic oils, and the dishes were seasoned with the intense aroma of saffron, Cicero and Petronius reported in the Cena Trimalchionis: "All the cakes and all the apples, when just gently touched, began to splash water of saffron, until the unpleasant liquid hit our face." As Plinius the Elder noted, it served as a medicine and a herbal supplement and Emperor Heliogabal was said to have preferred to bathe in saffron-mixed water.

Saffron is a crocus species, which in autumn reaches full bloom in violet color. The spice known as "saffron" is made from the stamps of the flowers of the saffron crocus, which is why raw saffron is often found in the form of filaments. Each flower contains the pencil or punch, which is branched in three scars, which is later dried and crushed as a spice. The aromatic sweet-smelling stamens have to be harvested in pure handwork, whereby a good picker can collect between 60 and 80 grams of the stamens daily. In order to obtain a kilogram of these threads, about 150,000 to 200,000 flowers are to be collected in the autumn from a cultivation area of approximately 1,000 square meters. Only once a year it blooms and the same on the whole field within 14 days at the same time. Saffron is, because of that, one of the most expensive spices in the world, at a price of about € 19 per gram.

The saffron plant as a perennial crocus species belongs to the family of the Iris family, which does not expel until autumn and persists in the soil for the rest of the year. So saffron is a tubing plant. The flowering of the saffron plant is composed of 6 lilac-colored perigone leaves, which open in the flowering tube. Each saffron plant produces annually a light yellow stylus, which is located within the petiole. This bright yellow stylus divides at the upper end of the flower into three 2.5 cm - 3.5 cm long red scarring branches. After harvesting, these 3 scars are the final saffron spice.

The main cultivation area for saffron is in Iran, which produces almost 80% of the world tea, which is about 200 tons per year. There are also larger areas of plantations in Afghanistan and Kashmir. In Europe saffron is also cultivated, here mainly the Mediterranean countries such as southern France, Spain, Morocco, Italy and Greece, which deal with the cultivation of saffron. In Turkey, there are larger areas of cultivation in the Safranbolu region, which can be assumed by the name alone. Almost 700 years, the central Anatolian small town Safranbolu was the hub for the trade caravans along the Silk Road, so it is little wonder that people also tried to grow saffron there. Even in Austria and Switzerland, saffron is being cultivated, but harvesting amounts are only between 1.5 and 2 kilograms. Near the Swiss village mouth lies the Swiss cultivation area of ​​approx. 18,000 square meters, the harvest result of which of course is strongly dependent on the respective weather. Under the name of Pannonian and Wachauer saffron, the Austrians are trying to gain market share.

Anyone who attempted to distort saffron in earlier times, or even to "cut it out", needed to fear due to draconian penalties. Even today the counterfeiting of saffron is still widespread: counterfeits usually consist of a mixture with turmeric. A quite safe chemical proof for blended saffron is the addition of sodium hydroxide solution to a solution of some "saffron powder." If it is pure saffron, the solution remains yellow, if it contains turmeric proportions, it becomes turbid and turns red. This test was already practiced centuries ago with the spice traders of the Near East. It is based on the different chemical properties of the dyes contained in saffron and turmeric.

Previously, the dye dumplings, also called false saffron, were used to color silk. This plant, also called safflower, is still used today for the cutting of real saffron. In a direct comparison, however, this spice dishes discolor much weaker than true saffron and does not have a distinct flavor. The trained eye of the expert can also distinguish the tube blossoms of the dyer's thistles from the filiform scars of the true saffron with the naked eye. These are usually two to three centimeters long, funnel-shaped rolled up and notched at the top.

In the modern homeopathic application Saffron finds its uses as well as in the kitchens of the world, as the following two recipes show.
Salmon fillet with vegetable julienne in saffron sauce
Cut the carrot and the leek into thin strips to a julienne, boil the white wine and the fish boullion (maybe replace with water), add the vegetables, let boil for 2 minutes, remove, rinse and place aside.

Season the fish fillets and let them heat for 10 minutes without boiling. Remove and warm up. Soften the saffron in hot water and place in the soup, boil the soup for 10 minutes. Combine with cream and possibly food.
Melt butter in a pot. Sprinkle the Julienne vegetables briefly in the warm butter. Serve the salmon fillets on the vegetables and with the sauce.
Without rice as a starter, with rice a main dish.
The ingredients for two people:

Cut the chicken breast into bite-size pieces. Dissolve the saffron powder in the natural yoghurt. Add the cut chicken breast and let marinate for about 2 hours in a refrigerator.
Peel the onions, cut into fine rings and mix with the ground almonds and the garlic (crushed or finely chopped).

Ghee in the pan, then the coriander and cross-cereal powder with the cinnamon and cardamom and fry in the pan. Then add the onion mixture and sauté. Now pour the natural yoghurt with the chicken into the pan, briefly simmer or leave to simmer. Then add the vegetable broth or the coconut milk (according to preference).
Turn the temperature down so that it simmers slightly. Allow to cook (approx. 45 min.), so that a thick consistency is formed. Add raisins after half the time. Finally, season with salt and cayenne pepper and serve with the almond sticks.