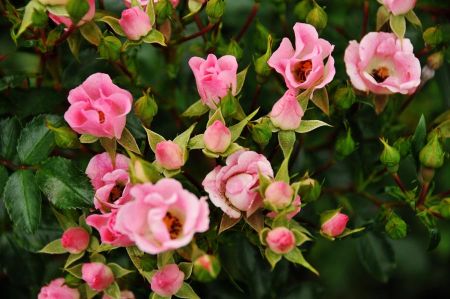 Slowly our meeting of authors in Halle approaches to the end. We took advantage of the rainy, but already autumnal morning for last talks.

Detlef then had scheduled a short trip to the European Rosarium at Sangershausen as kind of conclusion of the meeting, if the weather would allow. And lo and behold, around noon, the dense cloud covering cleared up, so we started shortly later. Via the Eislebener Chausee we drove towards Eisleben to then take the Highway 38 to Sangershausen, a way of about 65 kilometers from the center of Halle, which also led us along the "Sweet Lake" with its impressive castle. Another future goal was thus identified. 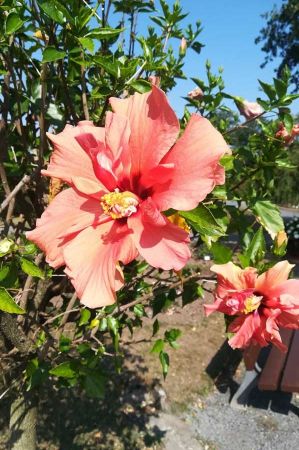 Certainly we do not need to explain what a rosarium is at this point, because just the term rosarium indicates it: roses in colorful biodiversity in a public, artistically landscaped park. Parks of this kind are found in a variety of towns and cities, mostly built at the beginning of the 19th century, when on the one hand people thought about the extinction of rose plants and on the other hand it was "smart" to decorate gardens with roses. Probably the most well-known rose lover was undoubtedly the so-called "Rosenkaiserin" Josephine, the wife of Napoleon I, who had a large collection of varieties of roses not far from Paris in Malmaison, indeed well bred. At the time of her death, she had all the varieties of roses available at that time, after all, there were 250 varieties in her garden. The French businessman Jules Gravereaux (1844 - 1916) had created his rose garden in 1899, which can still be visited today: Roseraie du Val-de-Marne in L'Haÿ-les-Roses south of Paris, which is still the largest Rosarium in France.

So what is special about the European Rosarium in Sangershausen? Well, quite simple: The European Rosarium in Sangershausen, which was also founded in 1903, has the largest collection of roses in the world, as it houses more than 8,300 rose varieties and varieties of 75,000 rose bushes. What are 250 varieties of rose queen Josephine? Sure, today there are quite a few new varieties and hybrids, so that the number of varieties has certainly risen, but on 8,300 varieties? We were curious.
The approach turned out to be easy, also parking lots were now sufficiently free at the beginning of September. So was our conversation because more of the question, whether it is because of the flowers, perhaps because of the season already too late. These thoughts were also unfounded, because we were given such a diverse, colorful picture that it is almost impossible to describe. Of course, the first flowers were long since bald and circumcised, but there were other varieties in full splendor. In general, the 13-hectare Roses-park offered such a variety of plants that the view was never bored. In addition the constantly changing smell, simply wonderful. Even the sun came to light again, so that our pictures could capture the special nature of the park.

In 1897 it was when the rose breeder Peter Lambert from Trier suggested to build a center for roses to the club "Deutscher Rosenfreunde". His background was the collection of old and endangered varieties to preserve for future generations. 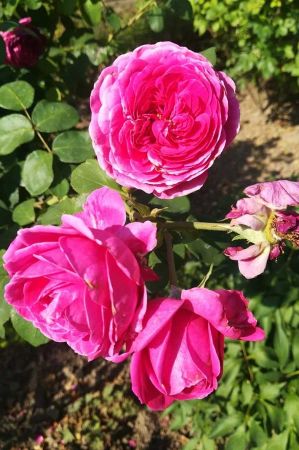 With the help of his friend Albert Hoffmann, he managed to get a piece of land from the city Sangershausen, which lay fallow at the time. As early as 1903, the Rosarium was opened on an area of ​​1.5 hectares. At first it was the collector's passion of the rose gardeners, followed by first breeding successes, so that the area of ​​the garden was soon no longer sufficient. New areas were added and soon rose varieties from all parts of the world were represented in Sangershausen.

Sangershausen - Highlight is then in June and July

In addition to the attractive park design, there are also varieties of rare trees and shrubs, which form a magnificent backdrop for the roses with their about 300 species. So it is not surprising that more than 100,000 visitors flock to the Europa-Rosarium every year. At the end of May, the magic of the flowers of about 500 species of wild roses begins. Highlight is then in June and July, the heyday of park roses, which convey a wonderful play of colors, quite apart from the scents. Now, the countless climbing roses pyramids come into their own.

We experience, now in early September, still beautiful climbing roses arrangements in full bloom and bedding and shrub roses whose color nuances were unknown to us. No wonder that the camera "glows".Rose attractions, such as the roses from Goethe's garden, the world's smallest roses and genuine oil roses, are just as much a part of this as are various moss roses and "green" and "black" roses. In short, such a variety of flowers, at parkways and varied park design is something special, so that the journey was more than worthwhile. Whether one chooses the circular route crossing the Scherbelberg, the Wolfsschlucht or the Alpinum, it is advisable to think of a picnic on the way due to the size of the park. So there are not only flowers in the park but also epicurean delicacies, which are expected to have something to do with "roses", how different could it be: we recommend the rose ice or the rose cake.
If this is not enough for you, you can stock up on literature on the subject of roses in the "Garden Dreams" shop, and even a sales area with a wide range of roses is waiting for customers. A worthwhile destination, which is not only interesting in midsummer and therefore worth visiting.