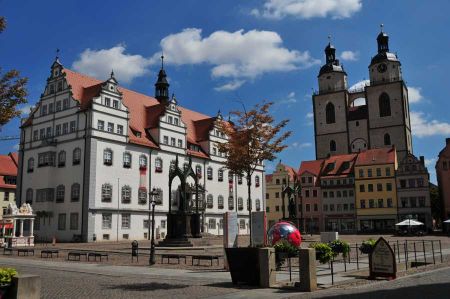 Already from afar we had spotted the striking main eye view of the city at the castle church during the journey to Wittenberg, nevertheless little unusual to be called church tower.

In this construction as a church tower unknown to us so far, one of the two castle towers of Wittenberg had been rebuilt to a church tower. On the massive round tower shaft, the church tower carries a filigree, copper-covered neo-Gothic tower dome from 1885/92, reaching a proud height of 88 meters. This really makes it visible from afar and strongly influences the cityscape. Underneath the bonnet, a banner made of mosaic stones encloses the tower, on which the words of Martin Luther's hymn "A stronghold is our god, a good weir and weapons" can be read.

Another striking feature is the roof of the castle church, which is covered with colorful glazed roof tiles in a diamond pattern. The roof has a gothic-style roof ridge and some shaped dormer windows, with matching with gothic arched windows between the outer pillars. The western gable is decorated with Gothic tracery. The Wittenberg Castle Church is one of the single-nave pilaster churches over five yokes and an apse with a 5/8 end, with the rear yoke occupied by the organ loft. The interior ceiling covers a delicate network vault. 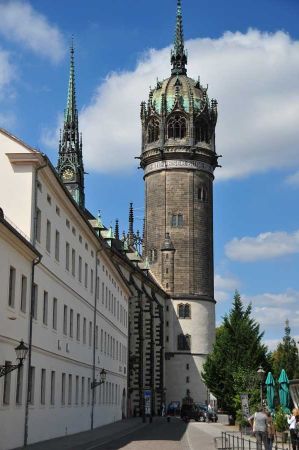 The first castle in its present location and with it the earliest castle church, the chapel of all saints, was built around 1340 by the Ascanian Rudolf I. On May 6, 1346, the Foundation "All Saints" was done, which was located in the newly built Ascanian castle. The Chapel of All Saints, donated by the Ascanian Duke Rudolf I, was placed under the direct rule of the Roman Seat.

From 1490 to 1515 Frederick the Wise rebuilt the entire castle. Since then the castle church forms the north wing. It was consecrated on January 17, 1503. Frederick the Wise laid an extensive collection of relics inside, the pilgrims were attracted from far away, and equipped them accordingly consuming.

After the founding of the Wittenberg University of Leucorea in 1502, the castle church was donated to it in 1507 as a university church, and the church developed into an academic sanctuary. Here, the students received their doctorates, here Philip Melanchthon made his famous inaugural address, prayers were performed in the church, and the academic dignitaries of the university were buried here.

Some of these dignitaries are still visible on the walls in their epitaphs.

The main portal, then made of wood, was used by the university members for pinning information. Martin Luther, conventual's of the Augustinian monastery and professor of theology, is said to have posted his 95 theses here on October 31, 1517, the eve of the patronage day of the castle church, in order to call for a disputation on the sale of indulgences. That was the trigger of the Reformation.

Luther's Thesis Door at the Castle Church of Wittenberg 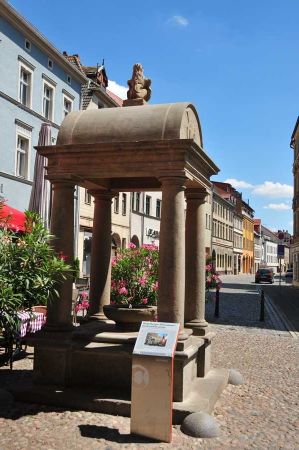 The old door of the Wittenberg Castle Church, to which Martin Luther allegedly struck his 95 theses in 1517, was destroyed by fire in 1760 and replaced by a wooden door. At this theses door today the so-called bronze Thesenür reminds all international visitors, given by the Prussian king Friedrich William IV to the city Wittenberg in 1858. It contains the text of Luther's 95 theses and is crowned with musical boys. After a drawings by Ferdinand von Quasts and models by Friedrich Drake it was cast by the Erzgießer Friebel from Berlin.

The strongly profiled door surrounds of the church door is still original; On both sides of the crest stone one sees the year 1499. In 1845 the figures of Elector Frederick the Wise and Duke John the Resilient of Frederick William Holbein were placed on high, wappengeschmückten pedestals on the portal. The designs for this are from Friedrich Drake. In the arch field is a crucifix with Luther and Melanchthon in front of the Wittenberg city silhouette of August von Kloeber in lava painting. The spandrels of the rectangular frame contain a barely legible capital inscription reminiscent of the 1760 fire and subsequent repair. 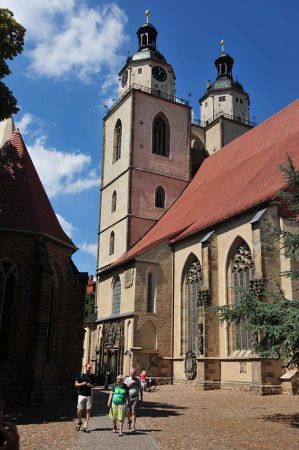 In the west of the old town of Wittenberg, at the end of the market street coming from the market, lies next to the castle church probably the most famous attraction of Lutherstadt Wittenberg, the parish church of St. Marien, which is considered the mother church of the Reformation. In 1521 the first Protestant mass was held by Justus Jonas the Elder and Andreas Bodenstein from Karlstadt. The artistic equipment Stadt- und Pfarrkirche St. Marien is well preserved and includes works by Lucas Cranach the Elder and Lucas Cranach the Younger, among others.