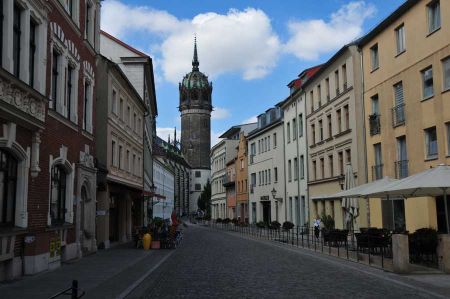 At Luther's time just about 2,000 people lived in Wittenberg. Apart from a few stone buildings such as the church and town houses, the roofs of most mud huts were mostly covered with straw. Between 1500 and 1550, only 54 new houses were built within the fortress ring.

The gaps in the streets began to close, just between the market and the city church a few places stayed. Between Collegiate and Mittelstraße smaller craft houses without backyards were created. For almost 40 years - from 1508, with a brief interruption, until 1546 - Luther lived in the Wittenberg hermit monastery. For the first time in his life, he was able to work on his ideas and unattended in his own even heated room in the tower room there. After the dissolution of the monastery and the marriage of Luther in 1525 Elector Friedrich III. gave the building to the reformer and his family.

95 theses - the beginning of the Reformation movement 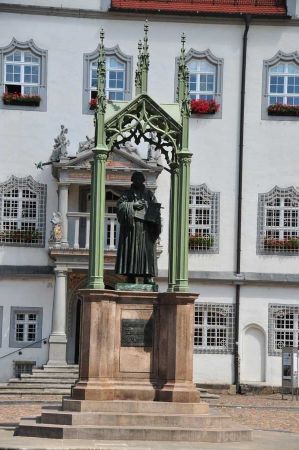 From the year 1517 onwards, the spread of Martin Luther's 95 theses fixed to the entrance portal of the Wittenberg Castle Church began, which, contributed to this, can be regarded as the beginning of the Reformation movement and by that Wittenberg could exert a strong attraction on scholars and students. In 1518, the chair of the Greek language was established for the first time. Frederick III. personally wanted to choose the person for the professorship and asked the philosopher and diplomat Johannes Reuchlin for a recommendation by letter. In the reply Reuchlin praised the theologian, philosopher and poet Philipp Melanchthon.

Whether the so-called theses attack at the churches door has actually taken place is discussed controversially. The Catholic church historian Erwin Iserloh argued in 1961 that only Philipp Melanchthon first mentioned a theses attack. Melanchthon can not have been a eyewitness of the event. In Melanchthon's publication in 1546 Martin Luther was already alive no longer. On the other hand, the supporters of the theses attack refer to the fact that the Faculty of Theology of the University of Wittenberg prescribed to make calls for academic disputations on church doors. The historian Daniel Jütte also came to the conclusion in his research that church doors in Luther's time played an important role as information boards in public spaces. Perhaps the attachment of posters had been so commonplace that Luther did not mention them in his writings. Posters, according to the historian, were glued or seal waxed and not hammered, as Melanchthon claimed. 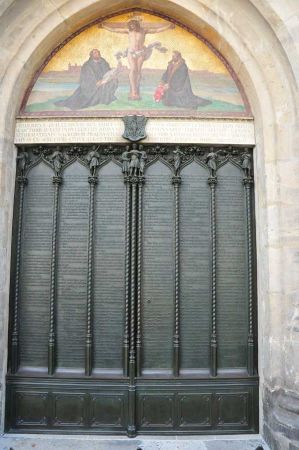 The reformer Martin Luther, like almost all the people of his time, was convinced of the existence of the devil. Luther himself believed he was personally persecuted by the devil. Therefore, the step to the witch faith for Luther was done quickly. Although he did not organize witch hunts in Wittenberg, he actively called for the killing of alleged witches from the pulpit. In 1526 Luther announced in the city church of Wittenberg:
"It's a very just law to have the sorceresses killed, because they do a lot of damage, which is sometimes ignored ... If you see such women, they have evil forms, I have seen some. That's why they should be killed. "- Martin Luther

Luther contributed to the fact with his sermons that the witch hunt already began in Wittenberg in 1540: Prista Frühbottin was arrested by the electoral bailiff, because she was accused of having poisoned the cattle in the pasture with the help of her son and two farmhands. In truth, a drought had killed the cattle. However, after the trial and torture, the defendants were tied to oak piles in the marketplace on June 29, 1540, and were burned alive by the fire below them.
The artist and eyewitness, Lucas Cranach the Younger, made a woodcut of the pyre. The Wittenberg executioner Magnus Fischer was also suspected of having been in close contact with Prista Frühbottin. He as well was seized and sentenced to death by burning, executed in Eisleben on July 7, 1540. In Wittenberg at least 21 people from 1540 to 1674 were affected by witch-hunts: eight executions are witnessed, of 13 other procedures is the output is not known. In connection with the trial of Prista Frühbottin, it is said in the documents handed down that many others have been arrested and convicted.
The Lutherstadt Wittenberg Council issued a social-ethical rehabilitation of victims of the persecution of witches on 30 October 2013.