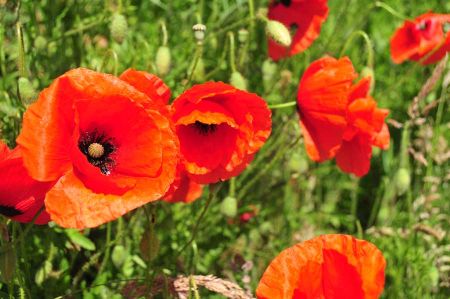 The poppy has always been a distinctive cultural companion in our arable and cultural landscape due to its blood-red flowers, a splash of color in the otherwise predominantly monotonous gray monocultures.

In the past, poppies were often found on agricultural fields and at field edges. Due to the increasing use of herbicides as well as the application of agricultural efficiency measures, the poppy was hardly to be found on fields. The plant is today more likely to be found on fallow land, on nutrient-rich meadows, on rubbish dumps or on roadsides. Together with the cornflowers, which are increasingly allowed in the margins of our fields to protect the insects, they are now but again the splashes of color that delight our eyes. What just a few know, however, is that the plant, can be used both as a kitchen plant and as a medicinal herb. However, poppies should always be consumed in small quantities, since the alkaloids contained in all plant parts of the poppy may otherwise cause poisoning if improperly dosed.

Corn poppy as a kitchen herb 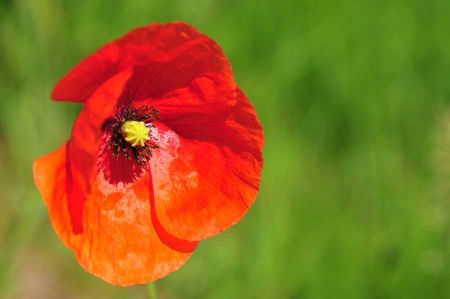 In the kitchen, poppy can be used quite diverse. For example, the poppy leaves can be used as an ingredient in salads. They have a pleasant cucumber-like and slightly nutty taste. Especially the young leaves are well suited in combination with nuts or pine nuts. The young leaves can be used raw before flowering, for example in the already mentioned salads. The red petals are suitable as an edible decoration. You can also eat the young, still green fruits. The leaves can be cooked like spinach, for example with fried shallots and some cream, although the taste is not necessarily comparable. The poppies are also used as a decoration for fruit salads or pies. For this purpose, the individual petals are plucked individually.

The small black seeds of the poppy can be used as a cake topping. However, one should refrain from making a complete poppy seed cake with the seeds, as it can lead to symptoms of intoxication if consumed in large quantities. Incidentally, the typical bark poppy comes from the seeds of the opium poppy, which is used for the production of morphine or heroin. Although the seeds themselves contain some low levels of alkaloids, they are not a problem for healthy adults. Children and especially toddlers and infants should refrain from eating, as it can lead to intoxication.

Corn poppy as a medicinal plant 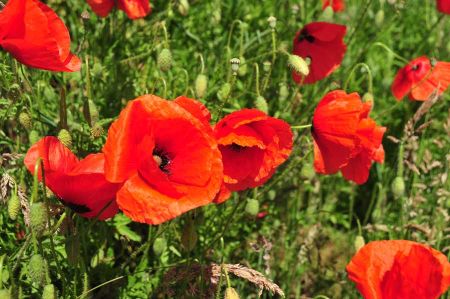 The poppy is rarely used in today's European natural medicine. This is mainly due to the fact that for many diseases and complaints much better natural remedies are available and that some of the ingredients have a weakly toxic effect.

In the Middle Ages, the poppy was a well-known and often described medicinal plant. The plant, often referred to as rattle flower, has been used to treat insomnia, constipation, fever, internal pain, and generalized gynecological disorders. All plant parts were used: from leaves to roots to seeds. In general, an infusion of the leaves and flowers was recommended, but also wine or specialized Methelixiere were quite common. 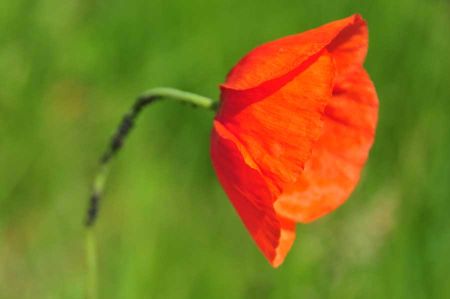 For sleep disorders and nervous restlessness, a syrup from the poppy flowers should be helpful. However, many physicians and well-known psychotherapists refuse treatment because efficacy has not been proven. Corn poppy also contains just very small amounts of the alkaloids acting on the nervous system. In addition, since slight symptoms of intoxication are possible, should be used for the supportive treatment of nervous restlessness or sleep disorders rather recognized medicinal plants such as valerian or lemon balm.

Despite the comparatively low use in today's naturopathy, the poppy is medically not uninteresting. Recent studies have shown that extracts from the poppy leaves have anti-cytotoxic and antimutagenic effects. In laboratory experiments, the effects of a DNA-damaging agent (Zeocin) could be attenuated by these extracts. However, further studies and trials are needed to develop an actual medication.

Side effects and instructions for use: Corn poppy should always be used in small doses. At low dose, side effects are usually not expected. However, if parts of the poppy are taken uncontrollably, there is a risk of poisoning, which may be accompanied by a slowing of the heartbeat, shortness of breath and nausea. If such symptoms occur after consumption, consult a doctor immediately. 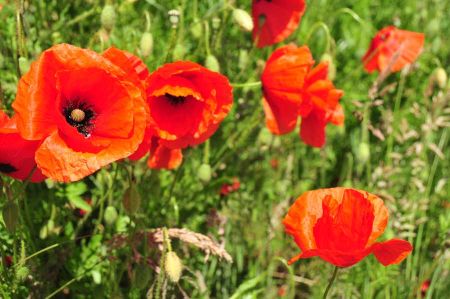 The dried petals serve as drugs. The red poppy flower petals are today contained as a jewelry drug without claim to effectiveness in tea blends of various indications. It used to be used in the form of a syrup for cough and hoarseness and as a sedative for infants, for pain, sleep disorders and restlessness. Since there is no proof of effectiveness, these applications have been abandoned.