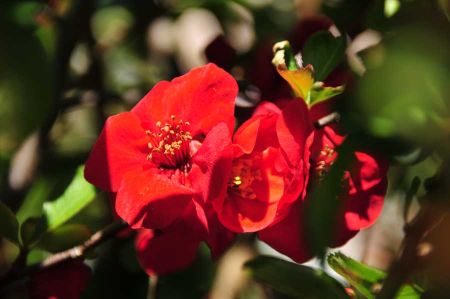 This year, despite the pandemic with all its restrictions, April was a month that gave us unexpectedly much sunshine but unfortunately too little rain.

One effect, while walking through a park, we noticed a green shrub with its bright red flowers, which are mostly hidden in the bush itself, sometimes appearing almost shielded from the leaves - the ornamental quinces are in full bloom.

The quince comes from the Far East in Asia. It was not until the end of the 18th century that ornamental quinces were brought to Europe as an attractive, flowering shrub for the sovereign splendor gardens, as they display their magnificent bloom in spring and even produce bright yellow fruits in autumn. Ornamental quinces are often mixed with real quinces. Both are close relatives, but still different plant species. Ornamental quinces grow as shrubs or hedge plants in many parks and gardens today, while the real quince is usually cultivated as a small tree. The decorative quince is because of that also known as a dummy quince and is not a decorative form of the large quince that we use as table fruit. Contrary to what the name of the popular ornamental shrub suggests, the aromatic-scented fruits of the ornamental quince are also edible and can be used in many different ways as wild fruit.

Quince fruits - a wild fruit with a lot of flavour 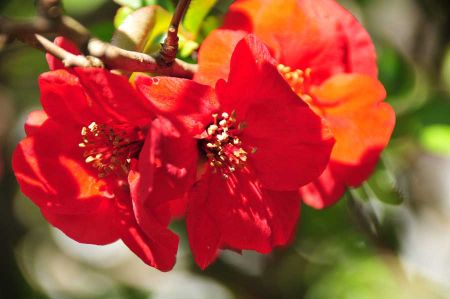 Ornamental quinces are usually harvested from September. However, it is worth waiting a bit longer for the harvest, because the fruits are usually ripe at the end of October when they have a rich yellow colour and a lovely fragrance. Quinces are less suitable for raw consumption, as they are quite hard and very acidic even when fully ripe, but this is a question of taste too. The yellow autumn fruit is because of that, rather processed into some goodies.

Decorative quince develops the best aroma when they already have got some frost. However, the fruits must also be harvested immediately after the first frost and used up as quickly as possible. If you want to store ornamental quinces as a supply, you should harvest them shortly before the first autumn frost so that they do not form brown spots later. Stored in a cool and dry place, the decorative quince can be kept for several weeks and ideally stay even for months.

After the first autumn frosts, the fruit produces a tasty jelly. They can be used just as varied as the large quinces. The fruits of the decorative quince contain little sugar and a lot of pectin, so they can also be used as a gelling aid (less gelling sugar) and they even work against diarrhoea. The sour juice can serve as a substitute for lemon juice.

The best known of the five types of quince is the Japanese quince and the Chinese quince. These two species later gave rise to numerous hybrid varieties, which are relatively widespread today in urban green spaces and gardens. 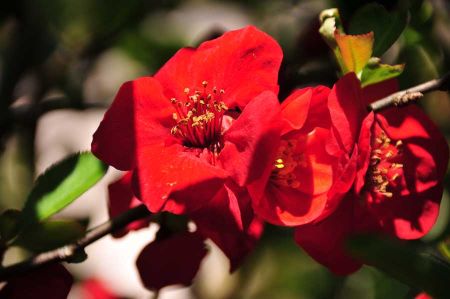 Ornamental quince can, as already mentioned, be processed into many goodies. The fruits are very suitable for the production of jelly or jam. Pure quince jelly does not necessarily taste good due to the naturally slightly bitter note of the fruit, especially since the decorative quinces are often much more acidic than the real quinces. So that the jam or jelly tastes better, it is recommended to add a few sweet fruits such as e.g. mix raspberries, strawberries, apples, pears or plums. In this way, the yellow autumn fruit can be conjured up into a fruity, delicious spread that no longer tastes too sour. 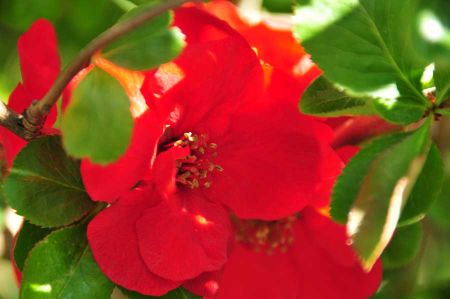 At Christmas time quince bread is very popular as a fruity sweet dessert. The name for this delicious candy is a bit irritating because it is not bread at all. Quince bread or quince confection is made from thickened quince jam. For the necessary sweetness it is mixed with sugar or honey and e.g. cooked apples. After that, the mash is spread on a baking sheet and pushed into the oven to dry out. After a while, the mash becomes firm. The finished jelly-like fruit mass can then be cut into square, triangular or diamond-shaped pieces as required. Most of the time, the delicious pieces of fruit are refined with granulated sugar or coated with chocolate. 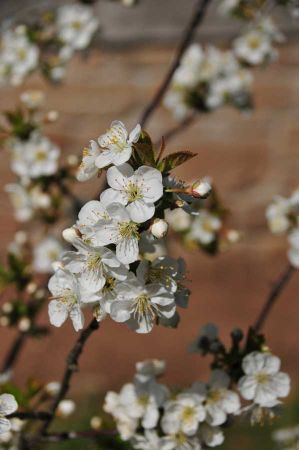 Quince liqueur is also popular. With an additional vanilla bean, the quince liqueur gets a very special touch. Another possible use for decorative quince is e.g. as squeezed juice. Due to the acidity of the decorative quince, it is suitable as a substitute for lemon juice. The decorative quince juice not only resembles lemons, but also provides plenty of vitamin C, even twice as much as the popular citrus fruit itself. Often, however, the fruit for squeezing the juice is not very productive because it is quite small.

Unfortunately, the presence and usability of the fruits are no longer known to many people today, so they mostly go carelessly through their surroundings. The fruits in particular could make a significant contribution to their own diversity in consumption. And it's free. And this not only addresses the ornamental quinces, but also raspberries and blackberries, even apples and pears, which are still in bloom on the country roads in astonishing blooms, produce their fruit, which then often carelessly mold in the trenches in autumn. A strange world that we have created.