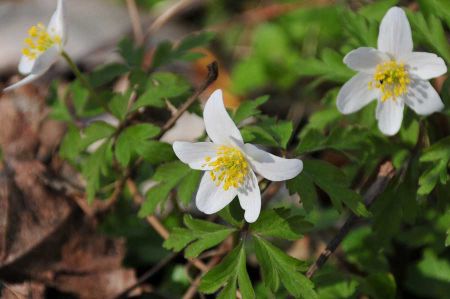 In times when, due to the reduction of movement and meeting with others because of the risk of infection, when even while travelling the maximum number of people is two and you should avoid meeting with other people as completely as possible, it is getting difficult for many to even leave the house.

Those who have the forest next to their doorstep and who can be that much close to nature, even if it is only for a short walk, can count themselves as really lucky. It is difficult for us too, to forego the obligatory family visits, camping and meeting friends, especially at Easter. But, we were able to use the wonderful weather before Easter several times to explore the surrounding area on foot. 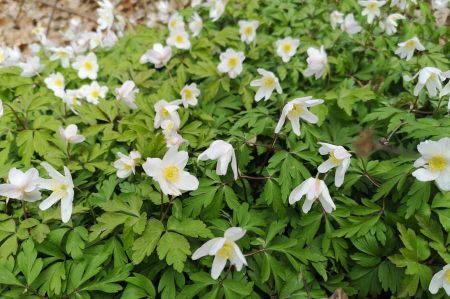 We were once again out in the forest, where the numerous spring bloomers naturally encouraged us to take pictures. Actually, looking for woodruff, we had to realize that it was still too early for this forest flower. However, there were numerous other blossoms that aroused our interest: "Look, what a large spread of the eye flower (East Frisian language for the anemone) are here," my comment. "What are eye flowers, you certainly mean the Witte Oeschen (name in Mecklenburg)", so it came back. This point in the naming was reason enough to deepen the conversation about the so-called wood anemone. 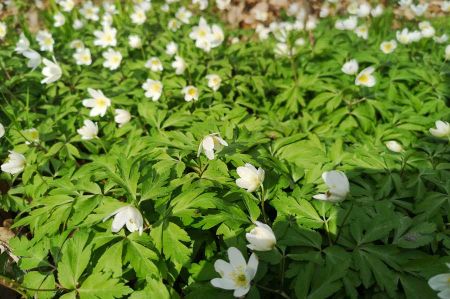 The wood anemone is actually called the witch flower, in Switzerland it is also called the Geisseblüemli. Here are just a few more names: Wittögschen or Zegenblaume is said in Göttingen, Käsblümchen in the Eifel near Kirchweiler, Morgendämmcher in Transylvania, Osterblome in Bremen, Zitlosa in St. Gallen in Switzerland, Gockeler in Augsburg and Schneekaterl in Salzburg. What becomes clear at the same time that the wood anemone is spread over almost the entire northern hemisphere, because its distribution area includes mainly the more Atlantic to subcontinental Western and Central Europe as well as parts of Asia from the plain to the mountains, in Austria often up to over 2000 meters above sea level . Germany is largely closed except for the coastal marshes and similar forest-free landscapes.

The wood anemone is a typical spring flowering plant that forms the herb layer in the woods while the trees are not yet bearing any leaves. Since the wood anemone has high light requirements, the entire life cycle of the plant takes place in spring. Large areas of this socially growing species are often taken up and covered with a carpet of white flowers. Moderately fresh to moist, nutrient-rich, deep, loamy gauze soils are settled in deciduous forests such as beech mixed forests, oak-hornbeam forests and hardwood riparian forests. The wood anemone is considered moderately demanding from an ecological point of view.

In the garden, the wood anemone thrives best in undisturbed places below trees. An occasional addition of humus is sufficient as care. Every tillage measure disturbs the development of the plant.

But be careful - the wood anemone is poisonous! 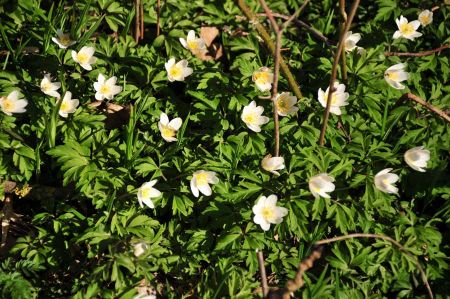 The wood anemone usually develops only one flower per plant specimen. The petiole stems from the union of the three bracts and is covered with numerous small hairs that are curved upwards. The flower contains six to eight white leaves, tinged slightly pink on the outside. The petal tip is usually rounded, but sometimes notched slightly.

The survival buds of the wood anemone are located on its sprout at a depth of more than one centimetre below the earth's surface. The leaves shoot out in early spring. After scattering the seeds, the aerial parts of the plants move in in the course of early summer. The nutrients for the next growing season are stored in the soil sprout. 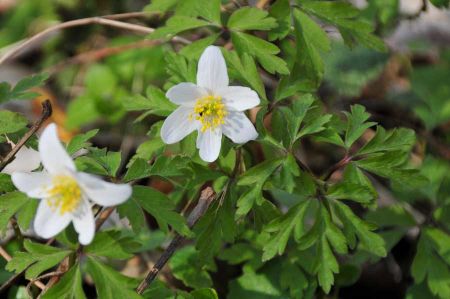 The flowers are closed at night and in cool weather due to growth movements; the outside of the petal grows faster than the top at low temperatures. The beginning of flowering of the wood anemone is considered the onset of the first spring.

All parts of the wood anemones are poisonous. The main active ingredient is proto anamonine, which is converted into an ineffective anemonin when it is dried. Little research has been done on other, partly unknown, toxins.