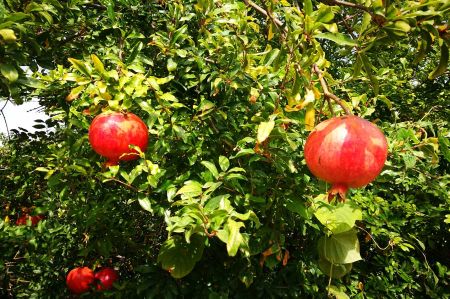 Slowly they ripen, so their red color becomes stronger, the smell more intense until the first fruits fall - the pomegranates, which grow almost uncultivated along the paths and shine so much beautiful in the sun.

The pomegranate is a symbol of life and fertility, but also for power, blood and death. In the Christian symbolic language, the pomegranate may stand for the church as Ekklesia, a community of believers. It also symbolizes the containment of creation in God's hand or Providence.

The pomegranate plays an important role in the Holy Bible 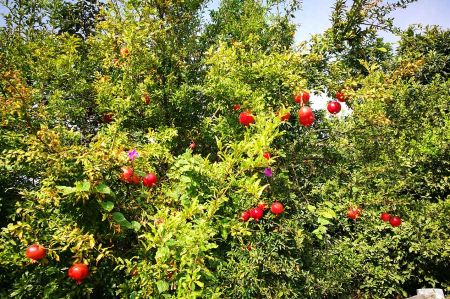 The pomegranate is mentioned several times in the Tanach or Old Testament. It is considered one of the significant seven fruits with which the Promised Land of Israel was blessed. Pomegranates were, according to the description in 2 Mos 28,33, part of the ephod of the high priest, whose execution God commanded the Israelites. The final knots of the two pillars, Jachin and Boa, in front of the Temple of Solomon were decorated by two rows of pomegranates. King Saul lingered under a pomegranate tree. In the Song of Solomon, the word pomegranate is used several times to underscore the beauty of a woman. Finally, the pomegranate tree is still described by the prophet Joel.

Pomegranate appear in the Koran - in the 6th and 2nd surah 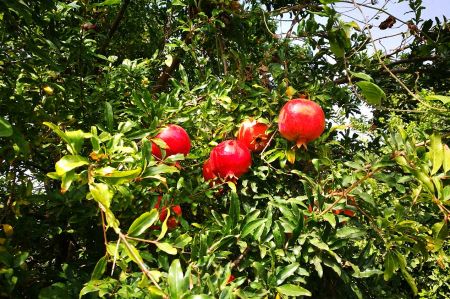 The pomegranate fruit is also mentioned in the Koran. The Cattle (6th surah), 99: "And it is Him who sends down water from the cloud, with which we bring forth all kinds of growth; With this we bring forth green, from which we sprout forth grain, and from the date-palm, from its bloom-umbels, down-hanging date-grapes, and gardens with grapes, and the olive and the pomegranate-similar and dissimilar. Consider their fruit when they bear fruit, and their ripening. Truly, these are signs for people who believe. "

The cattle (6th sura), 141: "It is Him who grows gardens, with rebar palaces and no rebar trellises, and the date palm and crop fields, whose fruits are of various kinds, and the olive and the pomegranate, similar and dissimilar, eat from their fruits when they bear fruit, but give Him the charge of it on the day of harvest, and not exceed the limits. Truly, He does not love the Exalted. "
The whereabouts of the true believers after their death is a garden, "traversed by streams" (Sura 2:25), in which numerous fruits grow. Palms, vines (2, 266, 17, 91, 36, 34) and pomegranates (55, 68) are mentioned in plants. "In both will be fruits, and dates and pomegranates."

The treatment of diseases with the help of pomegranates 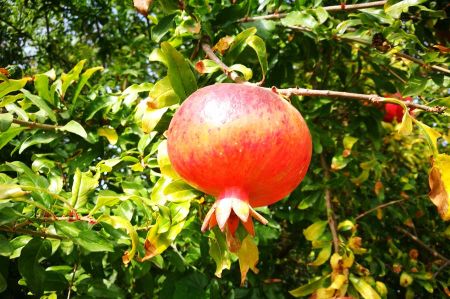 Historically, pomegranates have been used to treat various diseases, such as diarrhea and ulcers. The root, the bark and the cooked shell were used until the Middle Ages as an anthelminthic against tapeworms. In Unani medicine pomegranates are used to treat diabetes mellitus - diabetes.

As not only the fruit itself, but also other parts of the tree are rich in phytochemicals of possible therapeutic importance, the plant has become increasingly in the focus of scientific interest in recent decades. Numerous studies have investigated the possible positive effects of pomegranate juice in cardiovascular diseases and arthritis.