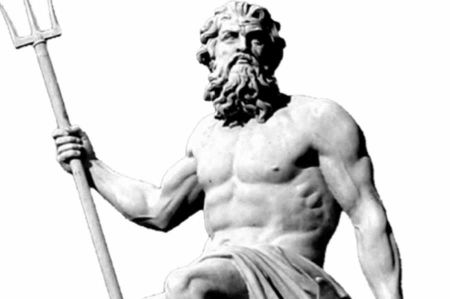 Poseidon (Latin: Neptunus) was the god of the sea and, as "Earth-Shaker," of earthquakes in Greek mythology. The name of the sea-god Nethuns in Etruscan was adopted in Latin for Neptune in Roman mythology: both were sea gods analogous to Poseidon.

Poseidon was a major civic god of several cities: in Athens, he was second only to Athena in importance, while in Corinth and many cities of Magna Graecia he was the chief god of the polis. In his benign aspect, Poseidon was seen as creating new islands and offering calm seas. When offended or ignored, he supposedly struck the ground with his trident and caused chaotic springs, earthquakes, drowning and shipwrecks. Sailors prayed to Poseidon for a safe voyage, sometimes drowning horses as a sacrifice.

According to Pausanias, Poseidon was one of the caretakers of the oracle at Delphi before Olympian Apollo took it over. Apollo and Poseidon worked closely in many realms: in colonization, for example, Delphic Apollo provided the authorization to go out and settle, while Poseidon watched over the colonists on their way, and provided the lustral water for the foundation-sacrifice. Xenophon's Anabasis describes a group of Spartan soldiers in 400–399 BCE singing to Poseidon a paean — a kind of hymn normally sung for Apollo.

Birth and triumph over Cronus

Poseidon was a son of Cronus and Rhea. In most accounts he is swallowed by Cronus at birth but later saved, with his other brothers and sisters, by Zeus. However in some versions of the story, he, like his brother Zeus, did not share the fate of his other brother and sisters who were eaten by Cronus. He was saved by his mother Rhea, who concealed him among a flock of lambs and pretended to have given birth to a colt, which she gave to Cronus to devour. Poseidon was raised by the Telchines on Rhodes, just as Zeus was raised by the Korybantes on Crete.

According to a single reference in the Iliad, when the world was divided by lot in three, Zeus received the sky, Hades the underworld and Poseidon the sea. In the Odyssey (v.398), Poseidon has a home in Aegae.

The walls of Troy

Poseidon and Apollo, having offended Zeus, were sent to serve King Laomedon of Troy. He had them build huge walls around the city and promised to reward them well, a promise he then refused to full fill. In vengeance, before the Trojan War, Poseidon sent a sea monster to attack Troy (it was later killed by Heracles).

His consort was Amphitrite, a nymph and ancient sea-goddess, daughter of Nereus and Doris.

A mortal woman named Tyro was married to Cretheus (with whom she had one son, Aeson) but loved Enipeus, a river god. She pursued Enipeus, who refused her advances. One day, Poseidon, filled with lust for Tyro, disguised himself as Enipeus, and from their union were born the heroes Pelias and Neleus, twin boys. Poseidon also had an affair with Alope, his granddaughter through Cercyon, begetting the Attic hero Hippothoon. Cercyon had his daughter buried alive but Poseidon turned her into the spring, Alope, near Eleusis.

Poseidon rescued Amymone from a lecherous satyr and then fathered a child, Nauplius, by her.

After having raped Caeneus, Poseidon fulfilled her request and changed her into a male warrior.

Not all of Poseidon's children were human. In an archaic myth, Poseidon once pursued Demeter. She spurned his advances, turning herself into a mare so that she could hide in a herd of horses; he saw through the deception and became a stallion and captured her. Their child was a horse, Arion, which was capable of human speech. Poseidon also had sexual intercourse with Medusa on the floor of a temple to Athena. Medusa was then changed into a monster by Athena. When she was later beheaded by the hero Perseus, Chrysaor and Pegasus emerged from her neck. There is also Triton, the merman; Polyphemus, the cyclops; and Oto and Ephialtae, the giants.

Zeus - the king of gods from Mount Olymp