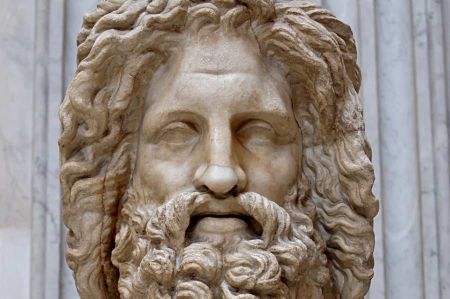 Zeus is the King of the Gods in Greek Mythology.  Zeus was viewed as a king who oversaw the universe. In Hesiod's Theology, he assigns the various gods their roles. In the Homeric Hymns he is referred to as the chieftain of the gods. He is also called the "Father of Gods and men", according to Hesiod's Theology.

He ruled the Olympians of Mount Olympus in ways representative as both a father as head of the family and a king. He was the god of sky and thunder in Greek mythology. His symbols are the thunderbolt, eagle, bull, and oak. In addition to his Indo-European inheritance, the classical "cloud-gatherer" also derives certain iconographic traits from the cultures of the Ancient Near East, such as the sceptre. Zeus is frequently depicted by Greek artists in one of two poses: standing, striding forward, with a thunderbolt levelled in his raised right hand, or seated in majesty.

Cronus sired several children by Rhea: Hestia, Demeter, Hera, Hades, and Poseidon, but swallowed them all as soon as they were born, since he had learned from Gaia and Uranus that he was destined to be overcome by his own son as he had overthrown his own father— an oracle that Zeus was to hear and avert. But when Zeus was about to be born, Rhea sought Gaia to devise a plan to save him, so that Cronus would get his retribution for his acts against Uranus and his own children. Rhea gave birth to Zeus in Crete, handing Cronus a rock wrapped in swaddling clothes, which he promptly swallowed.

Zeus becomes king of the gods

After reaching manhood, Zeus forced Cronus to disgorge first the stone (which was set down at Pytho under the glens of Parnassus to be a sign to mortal men, the Omphalos) then his siblings in reverse order of swallowing. In some versions, Metis gave Cronus an emetic to force him to disgorge the babies, or Zeus cut Cronus' stomach open. Then Zeus released the brothers of Cronus, the Gigantes, the Hecatonchires and the Cyclopes, from their dungeon in Tartarus, killing their guard, Campe. As a token of their appreciation, the Cyclopes gave him thunder and the thunderbolt, or lightning, which had previously been hidden by Gaia. Together, Zeus and his brothers and sisters, along with the Gigantes, Hecatonchires and Cyclopes overthrew Cronus and the other Titans, in the combat called the Titanomachy. The defeated Titans were then cast into a shadowy underworld region known as Tartarus. Atlas, one of the titans that fought against Zeus, was punished by having to hold up the sky.

After the battle with the Titans, Zeus shared the world with his elder brothers, Poseidon and Hades, by drawing lots: Zeus got the sky and air, Poseidon the waters, and Hades the world of the dead (the underworld). The ancient Earth, Gaia, could not be claimed; she was left to all three, each according to their capabilities, which explains why Poseidon was the "earth-shaker" (the god of earthquakes) and Hades claimed the humans that died. (See also: Penthus)

Gaia resented the way Zeus had treated the Titans, because they were her children. Soon after taking the throne as king of the gods, Zeus had to fight some of Gaia's other children, the monsters Typhon and Echidna. He vanquished Typhon and trapped him under a mountain, but left Echidna and her children alive.

He is described as being "Earth-born" and was gestated buried beneath the ground; this is Gaia's domain, though she had no direct involvement in his birth or development. Other versions of his parentage include a version of the former excluding Poseidon and one with solely Poseidon and Euryale as his parents.

Dionysus - God of Wine and Fun