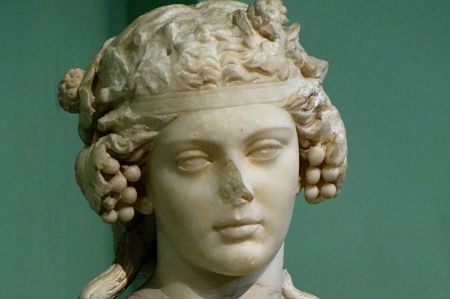 Dionysus or Dionysos is the ancient Greek god of wine, the god who inspires ritual madness and ecstasy, and a major figure of Greek mythology. He is included as one of the twelve Olympian Gods in some lists. Dionysus is typical of the god of the epiphany, "the god that comes".

He was also known as Bacchus, the name adopted by the Romans and the frenzy he induces, bakkheia. In addition to winemaking, he is the patron deity of agriculture and the theatre.

In Greek mythology, Dionysus is made out to be a son of Zeus and the mortal Semele. He is described as being womanly or "man-womanish". The name Dionysos is of uncertain significance; its -nysos element may well be non-Greek in origin, but its dio- element has been associated since antiquity with Zeus (genitive Dios). Nysa, for Greek writers, is either the nymph who nursed him, or the mountain where he was attended by several nymphs (the Nysiads), who fed him and made him immortal as directed by Hermes.

Dionysus is a god of mystery religious rites, of which the most famous were those practiced in honour of Demeter and Persephone at Eleusis near Athens. In the Thracian mysteries, he wears the brassards or fox-skin, symbolizing new life. His own rites, the Dionysian Mysteries practiced by maenads and others, were the most secret of all.

Many Greeks were sure that the cult of Dionysus arrived in Greece from Anatolia, but Greek concepts of where Nysa was, whether set in Anatolia, or in Libya ('away in the west beside a great ocean'), Ethiopia (Herodotus), or Arabia (Diodorus Siculus), are variable enough to suggest that a magical distant land was intended, perhaps named 'Nysa' to explain the god's unreadable name, as the 'god of Nysa.' The Anatolian Hittites' name for themselves in their own language ("Nesili") was "Nesi," however. The Hittites' influence on early Greek culture is often unappreciated.

The bull, the serpent, the ivy and the wine are the signs of the characteristic Dionysian atmosphere, and Dionysus is strongly associated with satyrs, centaurs, and saline. He is often shown riding a leopard, wearing a leopard skin, or in a chariot drawn by panthers, and may also be recognized by the thyrsus he carries. Besides the grapevine and its wild barren alter-ego, the toxic ivy plant, both sacred to him, the fig was also his symbol. The pinecone that tipped his thyrsus linked him to Cybele, and the pomegranate linked him to Demeter. The Dionysia and Lenaia festivals in Athens were dedicated to Dionysus.

Dionysus was another god of resurrection who was strongly linked to the bull. In a cult hymn from Olympia, at a festival for Hera, Dionysus is invited to come as a bull; "with bull-foot raging." Walter Burkert relates, "Quite frequently [Dionysus] is portrayed with bull horns, and in Kyzikos he has a tauromorphic image," and refers also to an archaic myth in which Dionysus is slaughtered as a bull calf and impiously eaten by the Titans. (In the Classical period of Greece, the bull and other animals identified with deities were separated from them as their agleam, a kind of heraldic show-piece that concretely signified their numinous presence).

Poseidon or Neptunus - God of the Sea