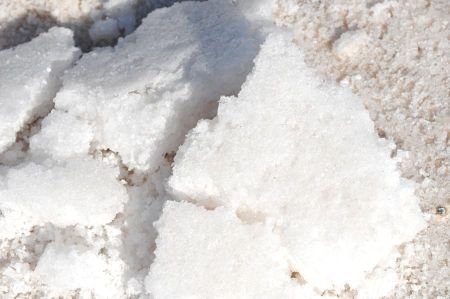 A problem in nutrition was also very closely linked to the transition of people from gatherers and hunters to the cultivation of grain and vegetables.

The physical need for salts and minerals has hitherto been covered in a simple manner by the various animal products on which the gatherers and hunters have mainly fed, the issue of salt deficiency became very acute with the switch to grain and vegetable cultivation. Plant-based foods are usually quite low in sodium and other minerals, which, apart from improving the taste of the food, quickly leads to deficiency symptoms in people and thus to illnesses. In this way, salt very quickly became a coveted product that was traded over long distances. From history we even hear of salt roads along which trade routes ran. 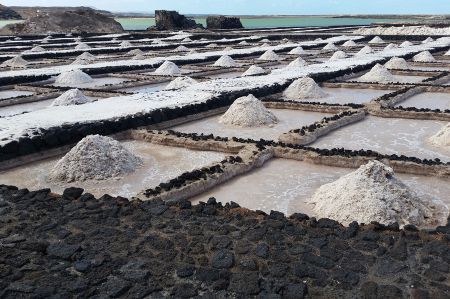 Long before the Romans, the coastal dwellers along the Mediterranean Sea and some large lakes knew that it is relatively easy to get hold of the white gold of the sea and that of the salt lakes. In the flat beach areas, small, shallow lakes were separated by low dams, in which the water was simply allowed to evaporate during the hot months.

What remained was a fine layer of salt, which could vary in thickness depending on the salt concentration. Whether the construction of the dams is actually a human “invention” or whether natural salt flats in shallow basins were found by chance can hardly be clarified.

Tuz Gölü is over 80 kilometers long 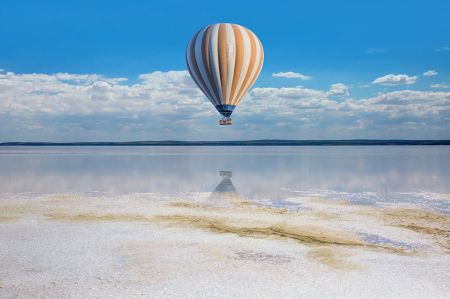 One of the saltiest lakes on earth is the Tuz Gölü in Central Anatolia near Ankara, which, in addition to the saturation of table salt (NaCl) in the lake water with a total salt content of 31 - 36%, has a high concentration of sulfate, magnesium and potassium ions.

The Tuz Gölü is over 80 kilometers long with an average width of over 50 kilometers, making it an area twice the size of Lake Constance. However, its depth is only 30 centimeters even after the snow has melted in spring. Only a small strip, about 15 kilometers long and 7 kilometers wide, shows a water depth of up to 1.50 meters.

Salt crust up to 8 centimeters thick 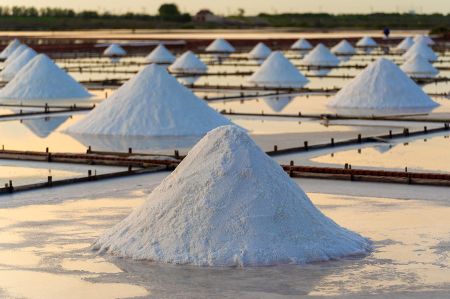 Due to the intense heat in Central Anatolia, most of the water in the lake evaporates in the months of May to August. What remains is a thick crust of salt, up to 8 centimeters thick, which is deposited on the bottom sediment. On parts of this crust, mostly single square kilometers large and up to 20 centimeters deep residual lakes with highly concentrated brine (salt still dissolved in water) remain.

This annually recurring process was probably one of the visual models for people to do the same as nature. At least people had quickly learned that the salt yield can be increased if the basins created for evaporation are designed as flat as possible, so that the so-called salt marshes can be developed, which can still be found on lakes or the sea today.

The salt is then cleaned in “salt factories”. 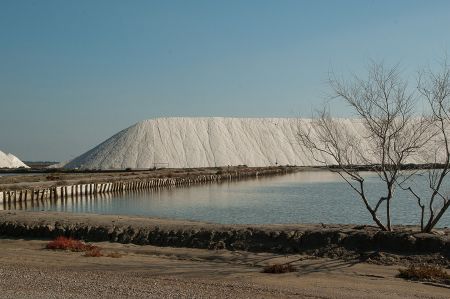 Sultan Murat IV had a dam built on Tuz Gölü in 1639 to improve the salt yield, dividing the lake into two large basins at its narrowest point at Kaldirim. Kaldirim is located at the end of a peninsula about 30 kilometers long that stretches from Sereflikochisar into the lake.

Salt is still extracted from the dry parts of the lake today, but for decades using technical equipment and lorries, which then transport the salt to the large storage heaps. The salt mountains of the otherwise very flat region can be seen from afar. In the so-called surrounding “salt factories”, the salt is then cleaned and packaged ready for dispatch.

Mankind's first salt mine near Hallstadt 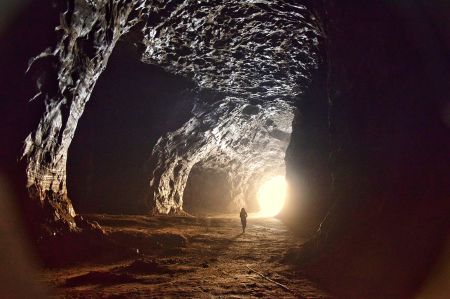 In the Austrian part of the Alps near Hallstatt, on the other hand, the probably first salt mines of mankind were created around 1,000 BC. The circumstances by which the "inhabitants" of the mountain region at that time came to dig for salt in this wasteland will probably remain a mystery forever. Long tunnels had to be driven into the rocks with bronze picks in order to get to the coveted salt. First, however, layers of rock and rubble several meters thick had to be overcome with the help of the bronze pick.

With the further drive into the rock, supporting structures made of wood were then also necessary to secure the tunnels. Since Hallstatt was also far away from the centers of the time, the entire logistics of supplying and disposing of the workers and the building materials had to be taken care of. The removal of the mined salt was correspondingly difficult.

The spring water was evaporated with large boiling pans 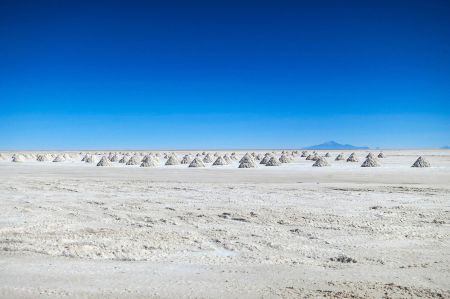 The Hallstatt mine was in operation for more than 500 years and supplied the surrounding towns and large parts of southern Europe with salt. Hallstatt became the most important center of the salt trade at the time. It is still unknown to this day why salt production in Hallstatt was suddenly stopped around 400 BC. Only in the middle of the 13th century is Hallstatt mentioned again in written sources as a salt location. It is also astonishing that no further tunnels were being built at this time, but that the saline springs in the Hallstatt area were used for salt production. The spring water was evaporated with large boiling pans until the pure salt remained in the pan as the end product.

But where do these accumulations of sometimes massive salt deposits come from, which are still being mined underground today? Rock salt deposits are often several million years old. There are huge deposits in Germany in the Neckar area and/or in the Bergisches Land. Huge salt deposits can also be found in the USA, Canada and Russia.

Scientists generally agree that the salt deposits were formed as the oceans dried up during different phases of the Earth's history. We now know that over the course of millions of years, tectonic shifts caused the land masses to be distributed quite differently on the earth's surface.

So there was a huge sea over large parts of Europe. Dry and hot epochs led to the evaporation of the water and thus to the sinking of the sea level. Of course, this phenomenon was particularly true for the arms of the sea that were separated from the sea, which no longer had any fresh water supply. Here, the evaporation processes of the H2O release large deposits of salt very quickly. 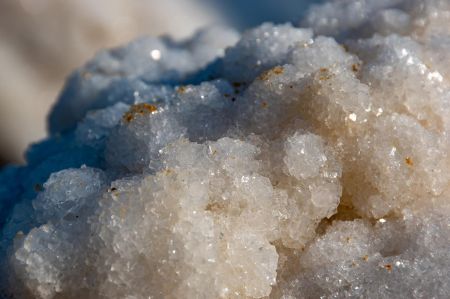 During the evaporation process, lime and dolomite first precipitate out of the water, followed by anhydrite and gypsum, until rock salt and other precious salts are then deposited. Over the centuries, layers of salt could be deposited that were up to 60 meters thick. In the further course of the earth's history, these salt deposits were then covered and conserved by other sediments. If one calculates an average salt content of 3.5%, which is still mostly measured today, the sea over this country would have to have been around 4,000 meters deep.

However, some of the salt deposits that have been found today have layers that are much thicker. In the North German lowlands, for example, there are subterranean salt domes with layers over 1,000 meters thick. With regard to the formation of these massive salt deposits, scientists are not yet in agreement as to whether this was possible solely through evaporation.

Deposit salt in such mighty layers 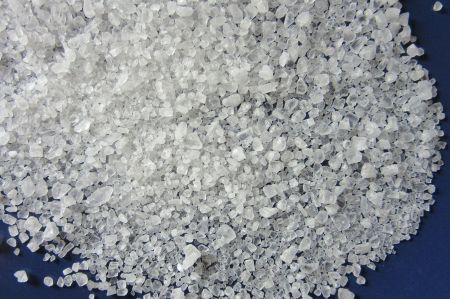 In science, one assumes accordingly that it cannot be a question of pure salt deposits, but that other salt concentration processes must have taken place at the same time.

For example, if fresh seawater continues to flow into estuaries that are not completely separated from the sea, the salt concentration can slowly increase.

Only pure water can evaporate from the surface. If at some point in the history of the earth this arm of the sea was completely separated from fresh water due to uplift or subsidence, salt could also be deposited in such thick layers.

Of course there are huge differences in quality 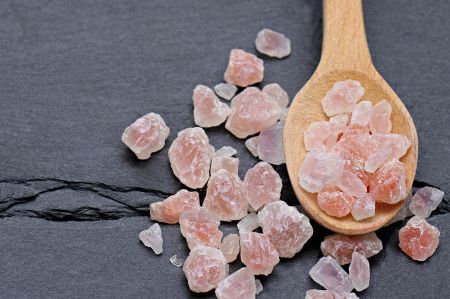 Today, in times of cooking shows in Asia Minor as well as in Europe, we no longer only find pure table salt to improve the taste quality of our dishes. A huge market has long since sprung up, offering salts from different continents, of different consistencies and at corresponding prices. The doctors are divided. One group says that we eat far too salty food and thus harm our body, while others point to the many positive effects of the minerals contained in salt. As is so often the case, the healthy middle ground is the right way. Of course there are huge differences in quality, which are due to the production alone. And a natural salt from the Himalayas simply tastes different than the mass product from a salt refinery.

The health-promoting spoonful of honey in the morning

The Camposanto - Old Cemetery in Buttstädt