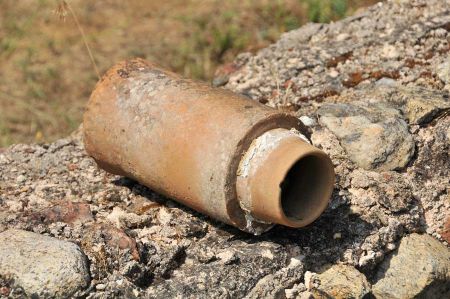 During our search for artifacts along the way of the ancient Via Egnatia in the area of Lake Ohrid, we received a reference to a small collection of artifacts, which a cultural-historically engaged teacher had gathered in the course of his activities from all over the region.

We arranged an appointment with the teacher's daughter, as she was to hold the key to the collection room, and made an appointment to visit the artifac.

As part of our visit to Herakleia Lynkestis, now Bitola, we have already noticed strangely changed details on the hand-molded clay pipes for supplying the city with fresh water that we had so far not perceived in the other ancient ruined cities: the necks were much longer and tapered of the pipes that had to be inserted into the corresponding pipe end of the next section. At first it was still unclear why this type of form, which was certainly far more difficult to negotiate in the making, then quickly became clear the meaning and purpose. The longer and more conical the connection neck was, the easier it was to lay off terrain adjustments or bends. We could see this very impressively when visiting the freshwater pipes of Herakleia Lynkestis.

Privat organised - The Museum at School of Kalishta

In some of the following pictures some of the details can be seen very well, even slight gradients could be easily overcome with the help of these slightly longer and conical neck. Since the conical neck also allowed a secure seal, with this type of pipe also a certain pressure build-up in the lines was possible. The average fresh water consumption of a Roman was about 460 liters per day, about 4 times the amount of water of a modern European. Thus, Roman cities were initially determined in their choice of location according to the criterion of the existing amount of fresh water, and the planned population therefore was already clear when the city was founded.

So we were not surprised to find comparable clay pipes in the collection of artifacts on site in Kalishta, which probably had to come from the same pottery workshop. Building materials trade along Via Egnatia? After all, also a proof that the transport of building materials across the country from city to city worked out well.

In the large collection there were earthen jars in remarkably good condition, stone segments with Hellenistic characters in their sometimes so confusing symbolism, the several characters / letters were combined to form a symbol, here in the picture quite clearly the A and M. A find probably came from Byzantine times from one of the basilicas in the transitional area of ​​the mountains to the alluvial region, typical of the Christian symbolism. In short, there was a very interesting collection that had been collected here over the years. Of course there were a lot of other artifacts from more recent times that included the span of Yugoslav communism. It is a pity, that this collection is not made public to the general tourists. Maybe later this will happen.