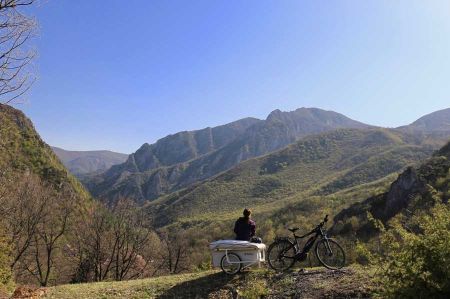 Several times we had reported about the innovative company GentleTent from Vienna, which could cause a stir with their inflatable tent constructions at the various fairs such as the CMT Stuttgart or the Caravan Salon Dusseldorf.

In the eyes of the beholders, it was especially the bike trailer with the integrated, inflatable tent structure, causing the interest. In spite of the still prevailing start-up phase, we are thankfully too, to be able to count ourselves among the partners of GentleTent, cause our project work is also supported.

Well prepared in advance of the current visit to Rino campsite in Struga, we had organised this marketing measure for film and photo shoots, planned shooting scenarios and selected locations, when the messages regarding the constant rain with the onset of snowmelt and flood on the lake surprised us. Too late to postpone the intended event in the wonderful surroundings of Lake Ohrid, after all, 9 people, especially from different countries, should attend the shooting event. Apart from the long journey, the financial effort is of course not insignificant. At this point, we ask for your understanding that the film and photo shootings for the catalogs of the year 2019 were made, so that only a few photos are online right now. 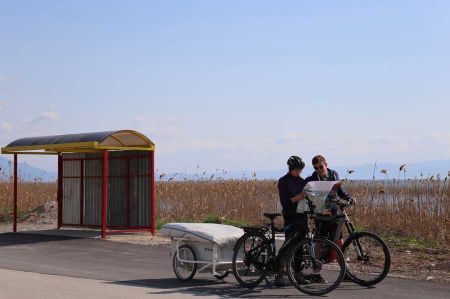 The team from GentleTent had accordingly arrived overnight, so the first shots of the structure of the tents for photo purposes happened in the early morning, almost in the morning sun, due to best light effects. Of course we pay special attention to the roof tent, which we want to test even more in use soon, but especially of course the "Turtl" and it's slogan "Do you still cycle or did you move to Turtl already". Due to the tight schedule and various exhibition fairs only 2 Turtl could be taken with to the Ohrid Lake, which was planned differently in the preparation.

First, the company vehicle was put up with the roof tent on the new site of Camping Rino, which also had lost a few meters of lake bank due to the violent storm with meter high waves. It was followed by other locations in the vicinity of Lake Ohrid, up to the surrounding Jablanica Mountains on the border with Albania. Of course, Pimi and Rino provided for the often needed coffee in between, as well as otherwise the physical well-being of the team was taken care of in the place belonging restaurant. In addition to the tents, since last year at Camping Rino, there are also some guest rooms, which were also occupied by the team.

After three days of intensive work, the spit was over and the team and equipment went back to Vienna. We stayed on site, cause now the test phase of our mountain bike should be done, which was thankfully provided by the company decathlon. First tours we have already presented in short blog reviews.

Thus, the extended test tour with mountain bike and Turtl, which should take place right after the marketing event at Lake Ohrid during our further activities in Macedonia, Greece and Albania, moved a bit forwards, since both Turtl vehicles are still needed for exhibition purposes in Austria. The weather also makes this rescheduling seem very useful, cause there is still too much snow on the local mountains. We will take over our Turtl a bit later in Greece at Zampetas and start our tours from there. But more on that later.

GentleTent Vienna - innovative partner of our project work
Are you still cycling? Or did you start with Turtl´n already?