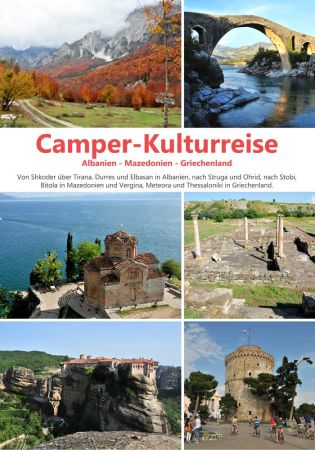 As part of our project to develop gentle camper and outdoor tourism in the Balkans, the "timidity" of many travelers was shown when talks turn to why not choosing the Balkan route on their way south.

This was the decisive criterion for us to develop a first part wise guided camper tour through Albania, Macedonia and Greece within the scope of the project work, which should include cultural as well as interesting hiking and cycling activities in order to establish contact with the respective population and the journey to the south even during the trip it can lead to intermediate stays for several days (topic overwintering in the south).

During the CMT in Stuttgart, we had the opportunity to point out the project work at the booth of our sponsors Fendt-Caravan and Frankana as well as at the booth of that year's partner country Albania and thus also to promote the partly guided camper cultural trip. The interest in Albania was particularly great, so that a first part-guided cultural trip could take place in April.

To the tour itself:

The campsite Legjenda near Shkodra in Albania (just about 245 kilometers from Dubrovnik), which can easily be reached along the Croatian coast via Montenegro, was chosen as the starting point and destination of the camper cultural trip.

Coordinates: GPS: N 42 ° 2'35.88 "E 19 ° 29'19.32" ----- 42.0433, 19.4887
During the reception of the participants and the subsequent dinner in the evening, there were first possibilities of mutual acquaintance learning, the program detailing as well as the first informal discussions of cultural aspects and peculiarities. Skoder itself is the second largest city of Albania in an incredibly beautiful lakes and river landscape, which we should get to know during the following five days. 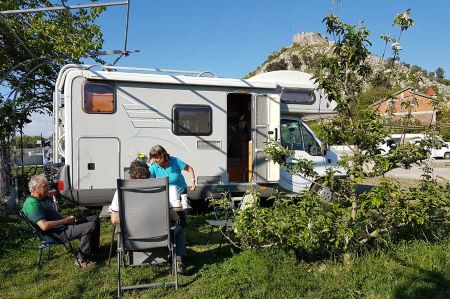 On the first day of the camper cultural trip, the hike up to the castle ruin Rozafa (about 30 minutes of easy ascent) followed by a city tour (4 hours) under German / English speaking leadership, also to recognize the "condition" of the participants and to adjust the other destinations, as already on the next day a bike ride to the Ottoman bridge Ura e Mesit should take place. All thoughts in this regard should turn out to be unfounded, the participants were in good shape.

The castle itself is absolutely worth seeing, because it shows traces of first settlement by the Illyrians and was then greatly expanded by the Ottomans, but the view of the surrounding river and lake landscape worth the effort of the climb. In the cityscape, the pedestrian area of ​​Shkoder is particularly attractive, as a whole block of Ottoman buildings has been restored here, also the extremely interesting museum for photography "Marubi" is located here in the pedestrian area.

After returning, the participants met for dinner together in a daily recurring manner in the restaurant, also to discuss the exchange of experiences.

The next day we cycled to the Ura e Mesit Bridge, about 8 kilometers away, an 18th century Ottoman-era arched bridge that spans the River Kir along an ancient trade route. About 108 meters long and consisting of 15 single arches, the bridge is about 18 meters high at the middle and largest arch, more a work of art than a pure bridge construction. After a little picnic break, we continued up the valley to the rapids. The way back later was much easier in the interest of all participants, as it was mostly downhill, so that also some talks could take place.

The next day was to bring us to the Cem Valley, where we wanted to enjoy the view of the long valley along the border to Montenegro from various viewpoints. Various stopovers were planned, which also invited to short exploratory hikes. In the mountain village of Tamara we had planned the lunch break and ordered our own trout, which were served absolutely fresh and grilled.

An initially somewhat skeptical plan change of the coming day should then be a highlight of the entire tour, despite the onset of rain. A boat trip to Shurdah Island and its ancient ruins was planned with a local fishing boat. But as a group of Albanians student had chosen this destination, the plan change saw a joint tour to the island and through the canyon. What a common fun, laugh, singing and exchange, as good English and German was spoken.

The change of location to the Hotel Baron in Tirana led us on the way to the fortress in Kruja, a medieval castle that also encloses the famous Skanderbeg Museum.

Hotel Baron Pitch No. 9 on www.camper-route.de

Skanderbeg is also an internationally recognized national hero for Albania, which at least partially succeeded in slowing the advance of the Ottomans in the Balkans.

The Hotel Baron is an excellent base for exploring the city of Tirana, where highlights include the Archaeological Museum and the BunkArt Museum should be visited. The city center is very modern, so numerous street cafes invite to linger, while the camper safely stays at the hotel.

A somewhat extended hike in a tributary valley of Tirana then led us into a huge stalactite cave, which is, due to lack of lighting, just with good headlamps and sturdy shoes easy to enjoy. We had extensively discussed appropriate equipment in advance so that we could feel like real speleologists.

Just 30 kilometers from Tirana, lies the modern port of Durres, which we wanted to visit the next day. Already in ancient times there were port facilities here, the Romans founded the starting point of the Via Egnatia here, which led via Ohrid and Bitola in Macedonia to Thessalonica, Kavala and Alexandroupolis to Istanbul.

An imposing Roman theater next to the Venetian wall tower is probably one of the highlights during the city tour. The historically interested reader should also visit the modern-designed museum on archeology.

The following day saw the departure from Tirana, which was to lead via Elbasan to Struga on Lake Ohrid. Also Elbasan was on the Via Egnatia, which still shows  a Roman city fortification in well-preserved condition, so we also made a stopover here. The Pass Quafe Tane the border crossing to Macedonia to the campsite Rino took place a little later. 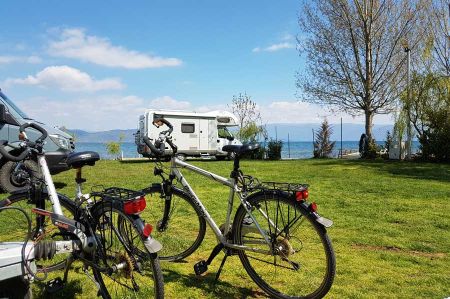 Located right on the lakeshore, Camping Rino is an ideal base for exploring really attractive destinations on Lake Ohrid, considered the second oldest lake on earth and still drinking water quality, a paradise for nature lovers and water lovers. By bike, you can quickly reach Struga, where the lake drains into the Black Drin, admirable here are the wave surfers in the river.

Ohrid itself shows a lot of cultural heritage from the past, so here is a Helenistic theater to see. Also Ohrid is easy to reach by bike (who wants, can also cycle around the lake) from Camping Rino. Absolute highlight is probably the wooden jetty along the peninsula with its cafes and restaurants, which leads as a hiking trail up to the fortress of Ohrid. An interesting walk that ends in the pedestrian area of ​​the Roman city on the Via Egnatia.

Almost opposite the campsite Rino is the well-known monastery Sveti Naum, a tourist magnet for all tourists on Lake Ohrid, according to it, it is crowded in the facilities on the weekend. Located directly on the border with Albania, however, there is also a touristic special feature: from the higher Prespa lake, the Ohridsee is supplied with fresh water, which is pressed through the mountain and in small, bubbling springs surrounded by white lime again. With rowing boats chartered for a small fee, the traveler can view these sources.

Nearby, a pass road through the national park leads to 1800 meters altitude, where there is a wonderful view of Lake Ohrid. Up to the summit of the Magaro at an altitude of 2,400 meters there is a wonderful hiking trail, which was still impassable during our presence due to a lot of snow. Incidentally, in the Galicica National Park, more than 30 well-marked hiking routes are waiting for visitors. Further information available, if desired.

About 120 kilometers from Struga lies the Roman-Byzantine city of Stobi, which has been unearthed by archaeologists who have been known to us for many years, so we were fortunate enough to be guided personally and in detail through the huge excavation site by one of the archaeologists. Stobi was once a rich commercial city where crossroads of various Roman roads, so the mosaics are famous from the time.

After returning to the campsite Rino we also expected a surprise there, because there was the Ohrid trout for dinner, well known far beyond the country's borders, a special type of trout, which only exists in Lake Ohrid as an endemic species.

The next day we left Camping Rino in the direction of Meteora in Greece, not without having made a stopover in Bitola, the former Herakleia Lynkestis, because here, too, are magnificent mosaics from Byzantine times. 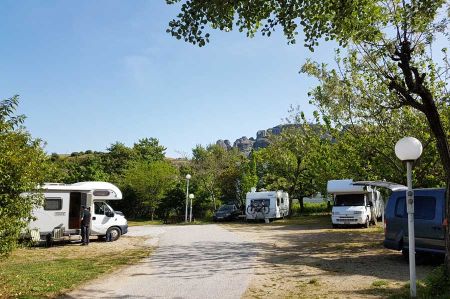 Camping Vrachos is the ideal location for exploring the Meteora monasteries, which are probably known worldwide as an attraction. In addition to well-developed motorways today, the region can also be excellently hiked, so after a walk through the illuminated Kastraki we had planned a hike to the rock needle, which allowed both the view of Kastraki and Kalambaka.

We also spent a whole day visiting three monasteries, which are now well organized open on different days of the week. However, the highlight of our visit to Meteora was the sunset, which we enjoyed with a bottle of wine, sheep's cheese and bread on the rocks.

During our onward journey to Thessalonica for the camper stop Zampetas the next day we stopped at Vergina to visit the imposing museum of the grave site of Philipp II. 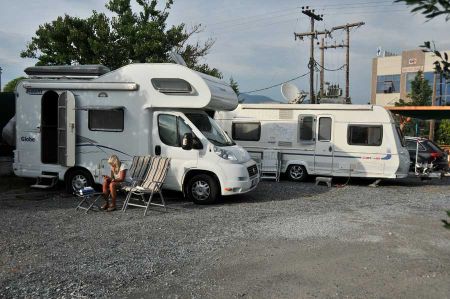 The end of our tour through Albania, Macedonia and Greece was to be the port city of Thessalonica, the second largest metropolis in Greece, also located on the Roman Via Egnatia. In addition to the Imperial Palace, the Galerius city gate and the Agora, it is above all the Rotunda that is a real magnet for visitors after successful restoration. The White Tower, the symbol of Thessalonica, is next to the waterfront a real tourist destination. At the end of the city tour and the final meeting of the campers tour, we went to the bar and restaurant district Ladadika, where not only typical Greek food is served but also the flair of the young attractive city center can be enjoyed.

By the way, Thessalonica also has an attractive network of cycle paths, which can be easily reached from Perea (camper stop Zampetas) with the passenger ferry Perea - Thessalonica. Our tour guests still had some days until their planned return journey, so we travelled to the beach at Kalamitsi as conclusion of the tour, where we enjoyed still a few days of beach holiday.