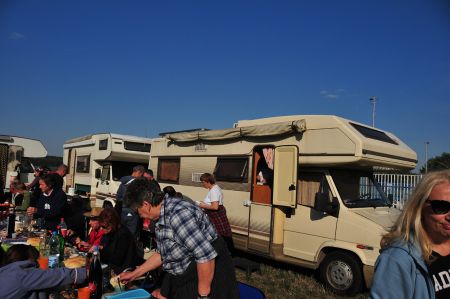 After the invitation to the camper club meeting on the river banks of the Danube at Smederevo, we left Belgrade on narrow side and country roads, which led us high above the Danube.

In some parts, a great view of the Danube opened up after the passage of Belgrade, which is the third largest city on the Danube, with about 1.15 million inhabitants, surrounded by mountain chains and green forests. With an age of 7000 years, Belgrade is one of the oldest inhabited settlements on the banks of the Danube at all. The city of Belgrade is built around the estuary of the Sava, its core is the massive fortress Kalemegdan, which we will be reporting about later, laying on a hill above the mouth of the river Sava into the Danube.

Our conversations after the arrival at the camping club meeting naturally led to the Danube itself, which is seen as a connecting element between Southeast and Western Europe by many of the present campers, as well wellknown for some impressive forts. On its further route through Serbia, the Danube flows past the industrial towns of Pančevo, the mouth of Temesh and Smederevo, where the Morava flows into the Danube. At Stari Slankamen, the Tisza flows in from the left, which is the largest tributary of the Danube. Below the ruins of the Serbian fortress Golubac, it enters the impressive Danube Canyon at the Iron Gate. The Danube forms the border between Serbia and Romania as far as the two dams Derdap 1 and 2. On the Serbian side is the national park Derdap.

In a document of the Byzantine emperor Basileios II, which dates from 1019, Smederevo is called as a bishopric of the Archbishopric Ohrid. When the Serbian despot Đurađ Branković returned to Hungary in 1427, he moved his capital to Smederevo, which in the following decades became the largest fortified city in Serbia. The city, situated at the mouth of the Jezava River in the Danube, also offered strategic advantages over the approaching Ottomans, due to its proximity to Hungary, with only the Danube separating Serbia and Hungary.

Until 1430 the inner fortress was built, also called small town, which is why the year 1430 is also considered the official founding date Smederevos. In 1439, Smederevo was conquered by the Ottomans after a three-month siege for the first time. In 1444, however, the Ottomans had to retreat, and Branković pushed the fortifications further. The outer fortress was expanded, also called the big city. In 1453 and 1456 two Ottoman sieges were surmounted. Until the final conquest of the Serbian despotate by the Ottomans in 1459, Smederevo remained its capital. Among the Ottomans it became the administrative seat of the Sandschak Smederevo, but lost this position to the Belgrade , conquered in 1521.

Lot of information on the history along the banks of the Danube were explained, which were given to us in the conversations of residents and campers. Especially by a German-speaking couple with excellent information on the local history and its impact on the life nowadays.

More and more tables were added to the row, chairs, plates and cutlery collected and set up. First appetizers were served, homemade, of course, as is still common in the Balkans and in many other countries of the Southeast.

Collecting mushrooms at the Camper stop Princeplatz in Slovenia

From Belgrade to the Serbian Camper Club Meeting at Danube