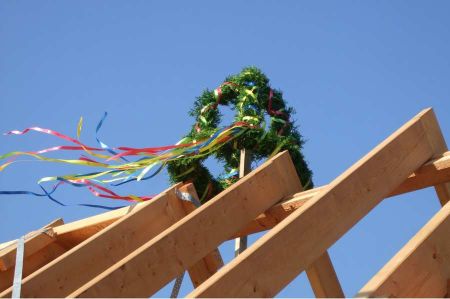 During  the last weekend the team of “alaturka” has got a very special invitation by the company BDC-Construction, to join a topping-out ceremony based on German tradition in Kargicak.

For sure we liked to follow this event which is not so common in Turkey until now and especially in this case because the architectural plans and the plot with beautiful view to the bay of Alanya combined with some interesting details in construction and pool were of special technical interest.
The design of the pool was different to the normal way of construction already because the concrete in direction to Alanya was lower than the other surrounding walls to open a way for the water falling as a waterfall, design and shape should be of highest level. While talking to the constructor, we learned that this will be a salty water pool which does not need any chemical additives to keep the water in good quality and the service will just need very little effort. For the feeling of real swimming in the sea there will be cross current machine installed as well as nozzles for massage, lamps and other details will be made of bronze. A huge part of the technical equipment will be directly imported from Europe by BDC as well as the technical staff for installments. Lot of more details had been mentioned so that we immediately asked for a second invitation after finishing the pool.
The construction itself will be build in double wall system with isolation in its center, there is isolation against water from the bottom and at least the electrical equipment will be of high technical standard as well.
BDC sees themselves as a specialist for high quality architecture and construction of unique villas because of the long lasting experience in construction for more than 25 years.
But now let us turn back to the main subject which is not so much known in Turkey so far – the Topping-out Ceremony.
In building construction, topping out, or topping off, is a ceremony held when the last beam is placed at the top of a building. The term may also refer to the overall completion of the building’s structure. A topping out ceremony is usually held to commemorate the event. 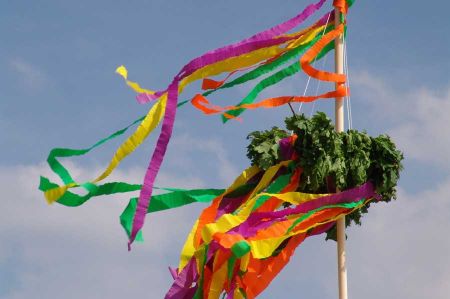 While common in England, Germany and Poland, the origins of the ceremony are obscure. Its practice has long been an important component of timber frame building. This tradition migrated to America with European craftsman. A tree or leafy branch is placed on the topmost beam, often with flags and streamers tied to it. A toast is usually drunk and sometimes the workmen are treated to a meal. The last beam to be hoisted is painted white and signed by all the workmen involved. In other types of building, the ceremony typically focuses on the bedding of the last block of masonry or brick. The ceremony is akin to the practice of placing a newspaper or coins under the foundation stone of a building.

THE PROCEDURE OF TOPPING-OUT CEREMONY

Today, a non-religious but formal ceremony is often held to commemorate this milestone in the construction of a building. All tradesmen on the job usually join in the celebration as well as the supervisors, representatives of the architecture and engineering firms, the owner or representatives of the owning organization, donors, and any VIPs that are invited.
The ceremony is often parlayed into a media event for public relations purposes.

While the ceremony itself has no standard agenda, it usually includes the placing of an evergreen tree upon the structure to symbolize growth and bring luck. State and national flags are often raised atop the structure. It may take place during lunch time and can include a catered meal and entertainment. In large building construction, the topping out beam may be signed by the ironworker crew, or by local dignitaries depending on the importance of the building. Ironworkers may take this as an opportunity to publicize their union local. The beam is signed on the ground before it is hoisted into place by crane.
The height of the ceremony takes place when the piece of steel is lifted into place and secured (although not completely). Often, the final piece of steel has little or no structural significance to the structure. After the ceremony is over, the piece of steel will be completely secured.
An uncommon event and party afterwards and the possibility of a second invitation after finishing the construction let us turn back to our office for this article to be written.