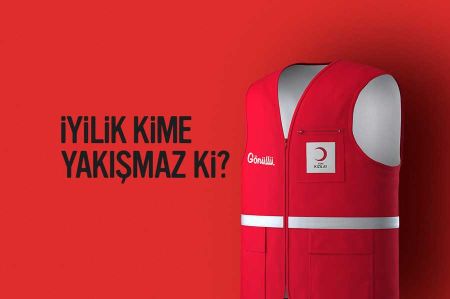 Comparable to the Red Cross in Europe, there is an aid organization in Turkey that is independent of the state, which is called Türkiye Kızılay Derneği in the translation "Turkish Red Crescent".

It is the largest Turkish aid organization and part of the International Red Cross and Red Crescent Movement and is therefore responsible for disaster relief, organizing the blood donation service, rehabilitation measures, health education and awareness raising. The Red Crescent is financed by donations and membership fees, organizes charity bazaars and sells special stamps as there are no government grants.

Founded during the Ottoman Empire on June 11, 1868 under the name Osmanlı Yaralı ve Hasta Askerlere Yardım Cemiyeti ("Ottoman Aid Organization for Wounded and Sick Soldiers"), the organization changed its name several times as its functions and tasks had also changed The organization received the name Red Crescent in 1935 from Mustafa Kemal Ataturk after the founding of the Republic of Turkey.
The seven basic principles of the Organization of the International Red Cross and Red Crescent Movement were established during the XX. International Red Cross Conference in Vienna in 1965: Humanity, non-partisanship, neutrality, independence, voluntariness, unity and universality.

The Turkish Red Crescent defines its mission in the following words:
Turkish Red Crescent Society is a humanitarian organization that provides relief to the vulnerable and those in need by mobilizing the power and resources of the community to protect human dignity anytime, anywhere, under any conditions and support the enhancement of the community's capacity to cope with disasters .

Now the Turkish Red Crescent is making a headline that has so far been barely comprehensible: "In future only" Halal "blood for medicines for Muslims".

In the future, the Turkish Red Crescent plans to manufacture all medicines that require blood for production itself in order to exclude the risk of the influence of non-Islamic diets on the blood. The head of the organization, Mr. Ahmet Lütfi Akar, said in an interview: "In this way you no longer need to import blood products that come from non-Muslims and that are therefore not" halal "". Akar further explained: "If you only use Turkish blood in the production, you can guarantee that the end products are in accordance with the religious rules of the Muslim users".

To justify his theses, Akar used the argument that eating large quantities of pork is the order of the day in Great Britain and that traces of pork are therefore also contained in blood imported from Great Britain.

From our own experience we can only say that it would certainly have made a lot more sense if Mr. Akar had called for blood and organ donations so that the problems of urgently needed blood and organs that are still prevalent worldwide are available. This also and especially applies to Turkey. Those who depend on blood, foreign organs or life-saving medication to ensure their survival certainly don't care whether the donor has eaten pork or a halal-slaughtered lamb!

Outside Facilities - open for everyone
Sepp Bögle, the stones-stacker from Radolfzell