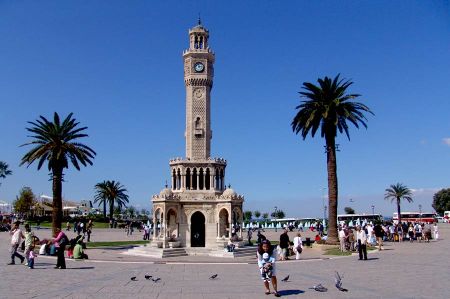 The Clock Tower of Izmir (Turkish İzmir Saat Kulesi) is situated at Konak Square in the district Konak of Smyrna, today Izmir in Turkey. It is located in close proximity to Yalı Mosque. The historic tower is the central point with its magnificence of the past century at Konak Square in Konak which can be considered the heart of the city.

Kaiser Wilhelm II has given the Clockwork

The Tower used to be at the seaside in the twenties. The clock mechanism was a gift of William II, German Emperor and never broken since more than 100 years.

The tower itself is 25 meters high and consist of four levels on an octagonal plan with iron and lead construction and raised Ottoman architecture, is surrounded by four Şadırvan shaped fountains. It is decorated in an elaborate, Ottoman architecture. The columns are inspired by the North African style of Moorish motifs.

It is not far from the Clock Tower to the Grand Bazaar in Kemeralti, in the center of which there is a former caravansary, which today presents itself as a center with cafes and teahouses and countless small shops. An absolutely worthwhile visit, not only for historically interested Izmir visitors. Just a little further is the Roman Agora of Izmir, from the time when it called itself Smyrna.