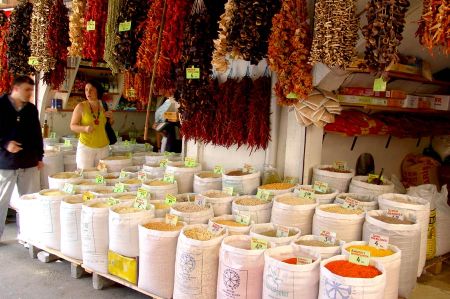 As a port town, İzmir has always been strategically important for trade between Anatolia and other Aegean cities. Not surprisingly, the region of Kemeralti on Izmir's shore is a bustling business centre.

The historical Kemeraltı, the best known local shopping market today, used to lie directly on the shore, land was reclaimed from the sea to create Konak Square, one of the most beautiful spots in Izmir, famous for its clock tower.
Original shops were made of wood or bricks, some covered with domes. The name Kemeraltı (under arches) comes from the fact that there were streets covered with arches with all the shops underneath. Besides small shops, there were many inns as well. Starting from 20th century it became a shopping area of mainly middle class people as it offered very reasonable prices.

While İzmir is now home to many modern shopping centres, Kemeralti's narrow and winding streets remain popular with its huge variety of goods, historic covered markets, kinds of traditional Turkish handicrafts, ceramic ware, wooden objects, clothing, leather and kilims, food and fish for your daily shopping.
Besides vaulted and domed shops of the past here you can find modern stores and business centers, movie theaters, restaurants, pudding shops, street musicians, coffees houses, fitness centers and cafeterias.
Kemeraltı counted until the beginning of the 20th century. During the 1922 Great Fire of Smyrna or afterwards the most of the remains were destroyed.

Kemeraltı is also home to most of Izmir's important historic buildings

The Hisar Mosque with its gorgeous interior is one of the most significant Ottoman landmarks in İzmir, built by Aydınoğlu Yakup Bey officially between 1592-1598.

The Kızlarağası Han, typical Ottoman building was built by Kızlarağası Hacı Beşir Ağa in the 18th century as a caravanserai. The Bedesten (Inn) is a square-shaped and two-floor building with the large courtyard used to have a small pool in the middle which doesn't exist today. It was restored in 1993 and turned into a market with antiques stores and gift shops. The Kızlarağası Han is a cultural center and a touristic attraction today. There is a small cafeteria in the courtyard where you can have a traditional drinks such as turkish tea or turkish coffee.

Salepcioglu Mosque was built by Salepçioğlu Hacı Ahmet Efendi in 1906 and has Izmir's largest dome. The minaret was restored in 1927 and 1974.
Konak(Yalı) Mosque was built in 1754 by Mehmet Paşa's daughter Ayşe Hatun. It is a little mosque standing in Konak Square. It is built in classical Ottoman architecture style and remarked by its octogonal plan and ceramic tiles.
An old marble fountain called Dönertaş Sebili is on Anafartalar Street in Kemeraltı. The fountain was built in 1814 by Osmanzade Seyyid İsmail Rahmi Efendi.
The street Havra gets its name from many Jewish synagogues built here. It is one of the most important streets of Kemeraltı Market. Locals mostly come here to do their daily shopping for kitchen such as fresh vegetables and fruits, fish and meat.

The Mayor’s Building of Kemeralti

If you walk towards the entrance of Kemaraltı from Konak Square, on the left side you can see The Mayor’s Building (called Hükümet Konağı in Turkish) which was built between 1868-1872.
This building has an important role in the history of İzmir. The Turkish Flag was raised on its balcony on September 9th, 1922, marking the liberation day of Izmir. The Building was restored after the Great Fire of the city.