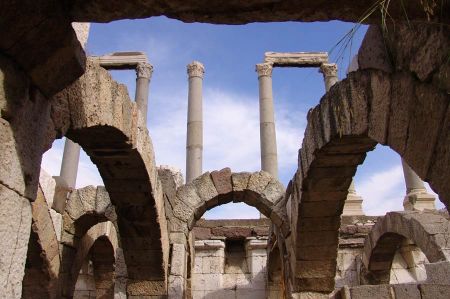 Located in the Namazgah district of İzmir, the Agora is built in Roman times (2nd century AD) and was built three floors high near the center of the city called Smyrna according to the Roman city plan of Hippodamos.

The Agora of İzmir is the largest and best preserved among the Ionian Agora´s.

In the excavations of the Agora of İzmir (after the first excavations in 1930 - 1941 by Rudolf Naumann and Prof. Dr. Miltner and the director of the Ephesus museums in İzmir, Selahattin Kantar), one recognized the rectangular shape of the building once being three floors high and a staircase around which a large atrium / forum (120 x 180 m) which has been located in the center and because of its columns and arches was well known already.

With the approval of the Ministry of Culture, newly excavation works resumed on August 5, 1996, after years of cooperation with the Governor of İzmir and the Directorate of the Archaeological Museum. It was a very difficult undertaking, since during the years "wild" cultivation had taken place and those inhabitants had to be relocated into new buildings.

In the meantime, large parts of the former castle hill are cleared off "modern" buildings, that's why it is possible now to continue with the exploration and the release of the ancient buildings.

Even today, some parts of the water pipes of the Romans are intact so far that they can be used to supply the city of Izmir. In the agora there are still bubbling springs that are supplied from far away from the city.