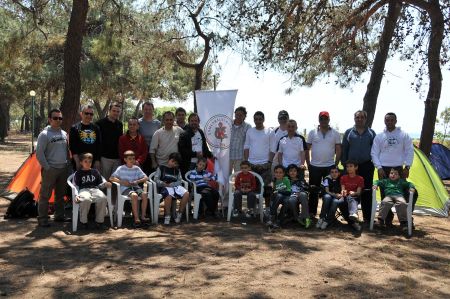 Early Sunday morning we started our trip back home to Antalya because we had got an invitation from the Director of Camlaralti Private College to come to Özdere, a small less important village on the way from Kusadasi to Seferihisar, for having breakfast together.

As we learned there is a beautiful camp ground next to the beach which was the background for our visit and the common breakfast.

For sure, the camp ground itself because of is lovely situation and well treated greens is worth a report, but we were more interested in Bentürk and his group of father’s and son’s. Camlaralti College once a year is spending a weekend with a group of father and son students on this camp ground to work on better socialisation between father and son, father and the College and for sure son and the College, so there is not just holiday and relaxing possible. We were quite interested to learn more.

We entered the camp ground via large pine trees and quickly met with the small tent village of Camlaralti Private College strewn between the trees. Nearly all father’s and son’s were at the breakfast table already, so we could get first explanations for the event from Bentürk before we had breakfast as well. Quite comfortable the small tent village was equipped, there was electricity, hot-and cold water from the tap, tables and chairs. Just the really small tents were looking little uncomfortable, but this never was a problem, because they were not used so much.

Next to quite lot of gaming the students and father do a kind of soft survival training which starts with building the tent village, collecting the woods for the daily camp fire and ending with the common preparation of drinks and food for the whole group. So to say, an huge amount of activities which need to be done by the community. For sure there is still time enough for all father’s to relax at the fire and exchange some ideas with his neighbour, this is for sure.

Step by Step all members of the group returned to the tent village, some father’s and son’s started playing football, others started working on cleaning the tents while others just relaxed in the hammock. Quickly some people assembled as Bentürk was introducing us to the group and couple of questions occur. For sure and as usual, there were lot of questions when our dear friend Patrick Andre was being introduced and so he had to explain step by step how he could fly new Turkish record in paragliding. We could have continued endless but because there still was a long trip to do, we needed to say good bye to our circle.

Story of an alternative life on the camp ground