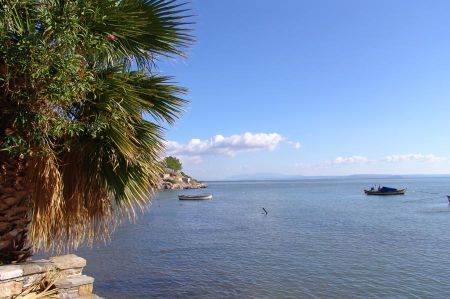 The marsh area created where piedmonts of Samsun Mountain and Büyük Menderes, which is the longest river of Western Anatolia, extend to meet the sea is one of the most important wetlands of the world today.

Among the lagoons on this wide and fertile delta created by Büyük Menderes River that accumulates the alluvions it carries from within Anatolia to Aegean coasts, the most significant one in terms of wildlife is the Karine Lagoon (Dil Gölü) with its area of over 2 thousand hectares.

You will pass through the New Village of Doğanbey that you will see upon turning right after leaving the Old Village of Doğanbey. Karine Lagoon, which is one of the most beautiful lagoons of the world, will quietly accompany you all along the way. You are not allowed to go beyond the military security zone at the end of the road. Here you will the see buildings that were used as custom houses in the era of Greeks. While some of these buildings were bought and rebuilt in accordance with their original form, some of them continue to whisper what they witnessed in the past with their walls still standing.  One of the buildings restored is used as a restaurant where a wide range of delicious fish is presented. You will feel at peace while daylight dances on the surface of the water. You can both eat fresh fish with the view of Karine Lagoon and enjoy this insatiable beauty.

Salinity rate of the lagoon that is under the effect of the river and the sea varies according to the season. The lagoon, where mild climate conditions prevail, is a wetland with medium level of nutrients in ecological terms. Karine Lagoon, which is used for reproduction, wintering or accommodation by numerous aquatic birds, is one of the attractive environments where the Dalmatian Pelican, which is under threat of extinction throughout the world, incubates.